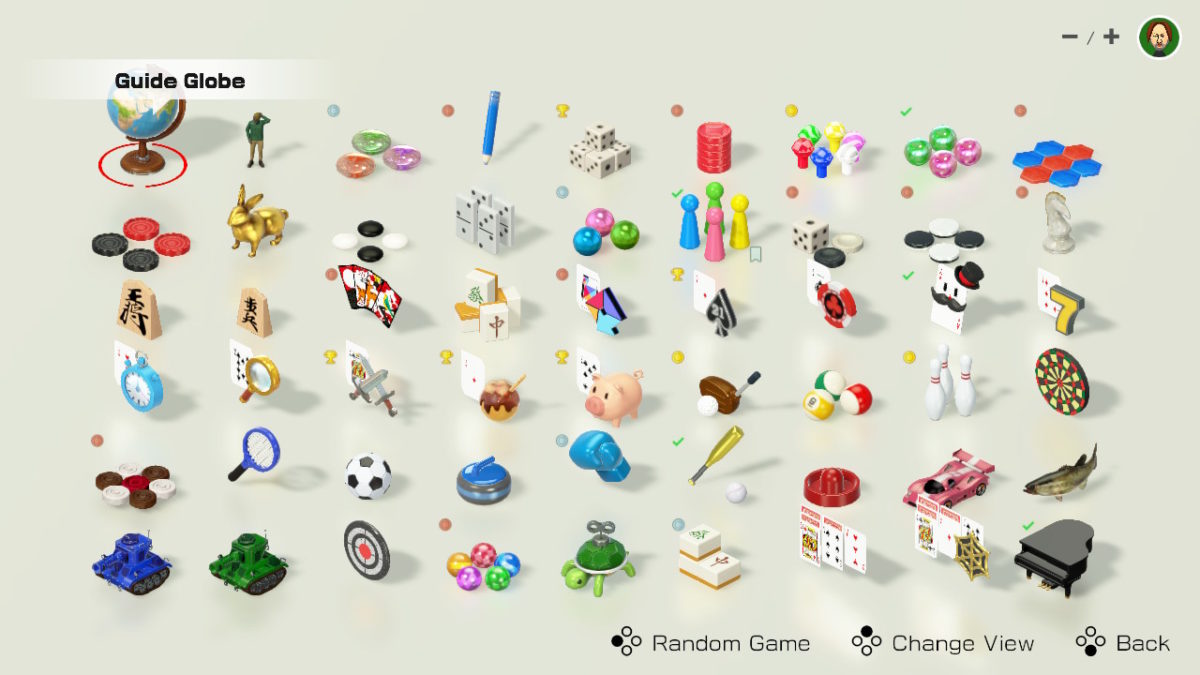 I loved the version on the DS, so I got this the moment it was released on Switch.

You start by picking from a set of little human pieces, which you can recolor their skin & hair, but not their appalling clothes. I almost went with Dad there, but in the end Cool Bro looks better. Looking at the random other players later, I see a lot of them chose that or Suit Guy. As I've noted before, Nintendo has Mii avatars, and then doesn't use them in games even where it'd make sense. You see a little face photo of your Mii in some games, but it should use your Mii in the world! Nintendo is so frustrating and anti-social.

Then you go to a globe UI, with figures representing "guides" that give you a menu of a few games. Or you can just pick any game from a preposterously long line menu, or you can hit X (up button) to switch to a grid which is more reasonable. UX is very confused, always a couple extra button presses or spinning the cursor around a too-large area to get to anywhere you want. You unlock more guides by playing games, earning trophies.

Your piece has up to 5 "recommendations", but you can't set them from in the game, you have to go all the way back out to the globe, find your piece, and add them from a list. And these don't help you jump back to a game fast, you have to find it in the grid every time.

Like almost all Nintendo software now, there's no settings for audio, and the "music" is driving me insane, but I need the sound to play some of these, so I'm constantly muting and unmuting. At least in the old days, Nintendo's music had complete scores, but they've apparently fired all their musicians, this is just beep-doo-beep-de-beep, over and over until I stab someone.

Each game starts with couple figures playing the game with often amusing commentary—the kids narrating Connect Four as a samurai duel is fantastic—often enough tutorial for anyone, but it immediately comes up to a menu with "How to Play" and Play, and hitting + in game usually gets a help menu. They're trying to teach you games you may be unfamiliar with. However, showing the tutorial EVERY time you start a game until you hit X (up) is insipid.

There are medals for winning against the AI and playing at least 2-4 times depending on the game, so there's a little grind possible if you're into that.

Nintendo History guide gives you: Hanafuda, Gomoku, President, Shogi, and Riichi Mahjong, which Nintendo made for a century before going into the videogames business.

Many of the games have local and Internet multiplayer, which I haven't yet tried. I expect the usual Nintendo® Quality™ networking, which is to say everything will drop out constantly. I'd rather play against AIs.

Current playlist of 11 good, 16 bad, 25 unplayed doesn't seem all that positive, but the good games are usually very good, and you can just ignore the stupid ones. The constant terrible music is the only strong negative.

I'll keep updating this post as I play more of them.

bold is good, italic is bad, plain is I haven't bothered to play it yet.