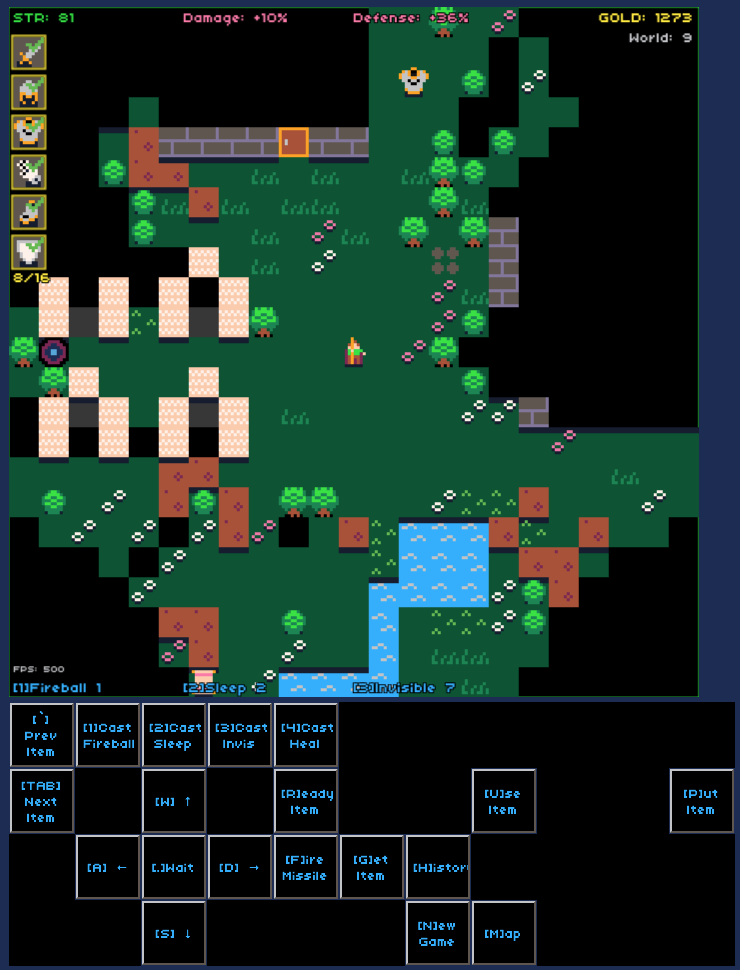 Pop back over to itch.io or my Patreon if you want to support this!

Doing some more work on the post-7DRL version of PortalWorlds, will publish this when judging's done.

What worked, what sucked, lessons learned, The More You Know, and knowing is half the battle, go Cobra, etc.

Especially the hard-to-test parts. I had one "obviously correct" array shuffle function I've been using for maybe 10 years:

And because of that, I got a distorted shuffle. I only noticed because no mob using my dumb-as-rocks not-even-AI would ever choose to move north… everything ended up piled up at the bottom of the map.

It's hard to test randomness, but you can check that values are in a sane range. For a decade I've had wrong code just copy-pasted into new projects because I never checked my assumptions.

I mean, I knew that. But how easy it is to throw something up is a bit of a surprise every time I do it. It's a fast, dynamic, functional/OOP language that also has good graphics and sound libraries (I didn't do sound in PortalWorlds, but I will before 1.0), and tolerable event handling these days.

I'm not releasing the full source, but in a week or two I'll add a few more things and release my common library under BSD license. This is mostly stuff from my Learn2JS project, and some from TTMS-76, but those have a giant framework for running scripts, this is just a few functions for a pure JS application, and greatly condensed.

Pulling in common code makes this stuff so much easier.

There's no proper "run loop" in PortalWorlds, and late in the process that bit me in the ass.

What you should do is, collect events, put them in a queue. Every X milliseconds (I usually use 30 FPS, so 1000/30=33.333ms) have setInterval do an event-update-redraw loop. If something takes a long time or requires animation updates, it must be done in chunks or in a background thread (using Web Workers ). This is true of any application, not just games.

What I did wrong is having events immediately perform actions, and the setInterval just does update-redraw. This is much easier, but it's wrong. I have no control currently over blocking user actions, and animation has to all happen at once.

The trick I used is to keep a "frame" counter, and that chooses animation frames, moves floating text and the tracers of missiles and fireballs. Next turn invoked by user event just wipes those out. An amusing side-effect is missiles vaporize corpses as they fly past.

Switching to a correct run loop isn't super hard, but does require changes to all my timing and animation hacks, so at this point it's not worth it.

I used Oryx's "simplex" font, which looks fine and bitmappy in web pages, but in Canvas it gets antialiased, and I wasn't able to make it stop. So I have to make all fonts slightly larger than I'd like, and they're still kind of blurry.

The smarter way would be to use a bitmap font, and a very simple bitmap text renderer. That's what I do in Perilar: Dark Weaver, with an ATASCII-inspired fantasy font. But in 7 days I didn't have time to write and test that.

That's on a "maybe later" list for 1.0. Alternately, I could figure out how to get them antialiased in Canvas?

I used to use yuicompressor, which renames variables and aggressively minimizes your code into unreadable but very compact line noise. But with the long-drawn-out death of Yahoo!, that hasn't been updated in a decade, and it doesn't handle ES2020.

I could probably have run everything thru Babel and then yuicompressor, but it's time to move on? So I just used Crockford's jsmin which only removes whitespace. It might be a good time to look into compiling JS to WASM binaries.

So I knew I wanted combat to be very swingy (allowing anything from instant death to instant kill), but not have levels or many stats; I didn't have time or inclination to make another detailed RPG!

Instead, combat works by adding your current strength and enemy's current strength, rolling 2 dice in half that range, so central results are more likely, but it's easy to get results at either far end. Then apply the difference from your strength as damage to you or the monster, depending on which side of the line it's on:

Kind of ridiculously simple, but it makes for symmetric combat, so player-attacks-monster and monster-attacks-player have the same results. It's not practical for a tabletop game, but this is a really fun mechanic in a computer game.

Damage and Defense from gear just modify the result by percentiles, they don't affect attack roll at all. If your strength + defense % is less than the monster's strength, you can be one-hit-killed, and vice versa.

Experience adds to current strength, and increases base strength if you're near max; you need to finish fights against slightly superior foes unharmed to grind up strength.

I knew I didn't have time for a lot of magic, and I never feel like I'm finished with magic systems anyway. So here I just picked 4 types: AOE damage, AOE control, escape, and heal; or as the game knows them, Fireball, Sleep, Invisible, and Heal. Then rather than have MP and worry about regeneration, I just give you "base" spells in each based on class, and you can pick up scrolls to add new points to current spell total. When you heal with mana potions or going thru a portal, you get back your base spells.

Last three were trivial: Sleep just searches a radius and has a die(100) > strength chance to give humanoid or animal targets a sleep condition for 2d4 turns; if they're sleeping, they skip the turn. Invis just sets an invis condition for 2d4 turns; mobs ignore you if you have that condition. Couple places like melee and taking damage I manually clear the Invis and Sleep conditions. Heal just heals 50% of base strength, woo.

Even with just 4, doing Fireball turned out to be quite challenging (the Application Structure problem); how do I show it go across the board, maybe have a turn or two delay, then explode? Well, it does it by moving 4 steps every turn, and only having the fake animation for a tracer of where it's been.

Permadeath happened more by lack of save state than any intention. I much prefer to have save slots, and then you can choose to save your game and reload last or earlier, or you can play hardcore and never reload. It puts the moral burden of choosing permadeath on the player, not the developer.

But JS localStorage doesn't really have room to stash a huge amount of data. In Reaper's Crypt I had a very aggressive compression for the map (which looks like a giant grid of tiles but it's really about 64 rooms per level), and it's still problematic, sometimes maps just can't be saved.

I could save the character as of last portal you entered, and regenerate maps. But that encourages "stair-scumming", which I do have a problem with. So instead this is very arcade-like, you just play until you die, then insert another quarter.

I do plan to add a scoreboard, both local and maybe server-based for a copy hosted on mysticdungeon.club.

Actually finishing something and making it public without a decade-long process is amazing. It's not perfect, and I know nothing is perfect, I should just ship things, but I can't normally do that. Having a hard deadline and meeting it was the best feeling.

I was desperately exhausted afterwards. Bone tired all day Sunday, and I'm still feeling it on Monday. 7 days in a row, even with a couple shorter days, is about 3 or 4 days too many.

I'm nocturnal. I like to wake up ideally just before midnight (but sometimes backslide to evening if Real Life interferes), eat and coffee, then work until dawn, walk the dog at sunrise, maybe get my own walk in (tiny dog cannot keep up for a mile+), then finish up and goof off until early afternoon when I can sleep. The schedule weirds out some daywalkers, but it's quieter and more compatible with "morning people" (ugh) than waking in afternoon and sleeping at dawn, which I did for decades.

But normally that work is 3 days of code, 1-2 days of writing or art, 2-3 days of just playing videogames or going Outside, doing Real Life AFK stuff.

Well, I'm exhausted, but I have a working #7DRL shipped. I may come back tonight and do some more, otherwise a post-7DRL update will fix the missing bits.

Play, and if you liked it, shower me in gold, or at least rattle some change at my tip jar. If you have other feedback, comment but be kind, I'm so very tired.

Archive of my dev diary/comments:

I'm planning on doing the 7DRL challenge, which runs from Saturday Feb 29 to Saturday Mar 7.

I did some design work this morning, picking out tilesets and making some index card notes for my 7DRL. Think I have kind of a neat world model, and different combat/levelling system.

I expect to have my Chez graphics library fully ported by then (I can draw sprites now! Events are much harder.), but getting it to compile on Mac, Windows, & Linux? Way out of scope, as I found out when I did Eldritch, catastrophic waste of effort for a freebie game. So I'm probably doing it in JS, just so much easier to upload a web page.