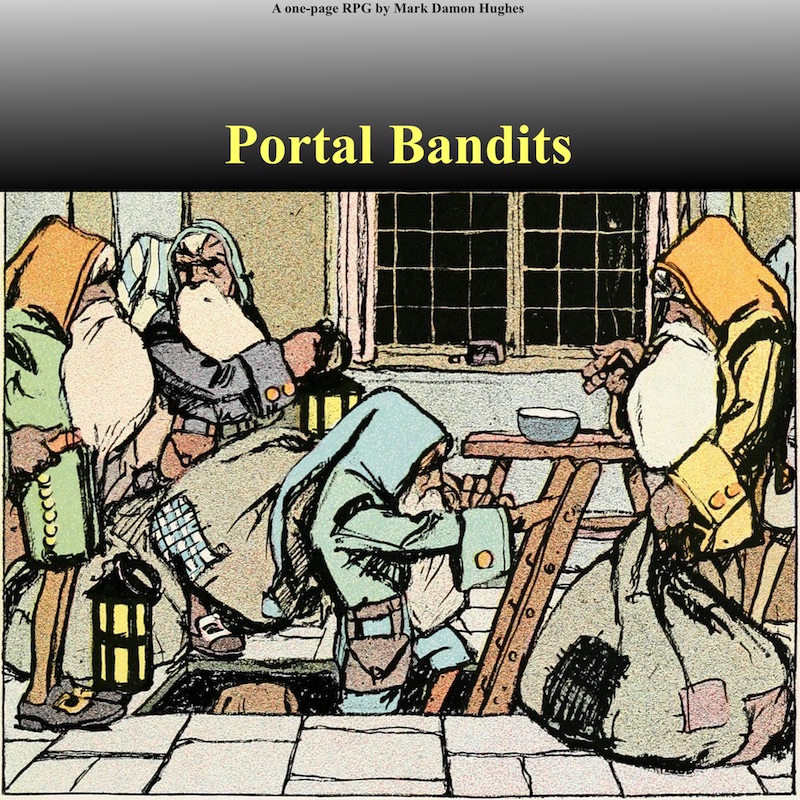 I saw there was a one-page RPG jam, but hadn't thought of any theme or tricks to do with it. Then in the shower, I realized I could adapt the source of my PortalWorlds 7DRL videogame to one page really easily. I went with more of a Norse mythology theme, rather than the inspiration movie's "God" and "Satan" (whatever those are supposed to be, some crank carpenter cult thing).

In one page there isn't much room to expand on setting and discuss design, but two main principles: You are small and weak, and not even very clever; a Human adult is a scary monster. Magic items are the great leveller, in fact there's no advancement except getting Loot. Gold is really only a score, and it can bribe Humans and other monsters.

For a sample Realm, I just rolled Ancient Egypt, Zombies, Evil King. So now you might have to fight a bunch of undead, but more likely you'd sneak around vast temples and pyramids, let the zombies in, rob the Pharaoh without getting mummified, and run for the portal out. Next Realm is Modern America, with Assassins, and a Good King. So here you find a sympathetic President (mid-'90s?), being hunted by assassins. You still need to loot the White House for Kennedy's Gold Dildo or whatever, but you can't do that unless you stop the killers. Nobody thinks a bunch of little Dwarfs are any good at anything or a threat.

Written & layout in Pages, which works great for little things like this.

Only solo-tested a quick combat, but it works. Let me know if you get a chance to play, I will when I can.