A text-mode twin-stick shooter (well, except it's an emulated Atari 800 "text mode", and the sticks are WASD and IJKL, I haven't written joystick support yet).

You can also play it like a stealth game, H hides you from non-adjacent monsters, so you can just run in, hide, wait for them to move off.

You collect candies for score (and banishing monsters earns candy), but every time you move to the next level you eat 10 candy to recover a hit and get some free pumpkins. So it's usually better to stay and clear all monsters, pick up all candies, then move on. But if you have a bunch of witches and ghosts, might be worth running away early. 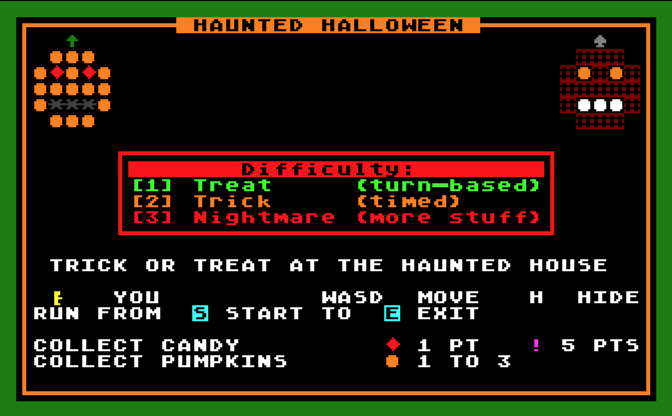 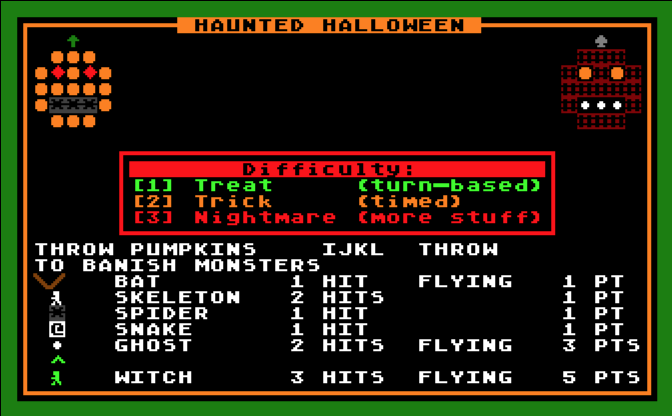 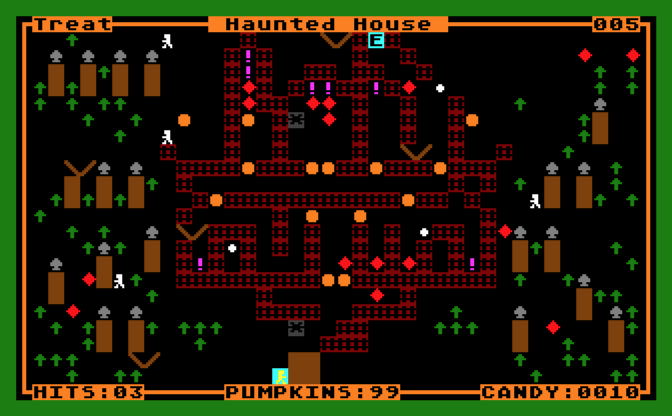 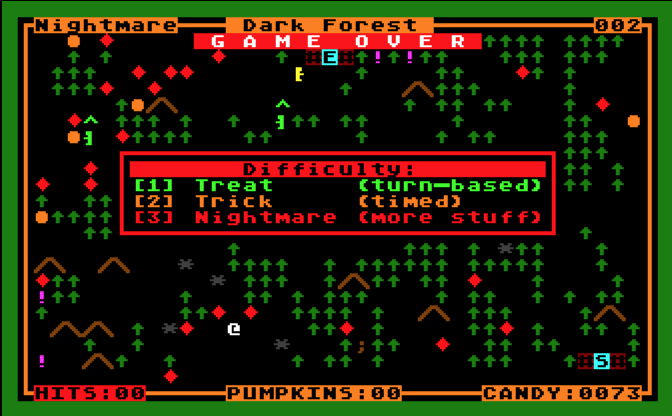 The interesting thing from development is how little code is required for this kind of game. Halloween is under 1000 LOC, and that includes some long text blobs! Portal Worlds was 3000 LOC, Dungeon's over 3200 LOC and not even close to "done".

Redesigned the front as a software gallery, got Portal Worlds working with my common input system, adapted Amazing (the dumb maze game).

I might get Heist adapted this weekend. Cityscape needs either a custom character set, or I add sprite graphics to the retro screen, which is a better plan. I have a bunch more JS games and demos, most can be adapted pretty quick. Porting the Mystic Dungeon RPG from Python is harder, but on the list.

Still thinking about the forum idea, I haven't seen a lot of interest yet, but a place for smack-talking would be nice.

It's really quite nice just having an easy way to focus on the game design or UI mechanics, and not have to make infrastructure from scratch every time. 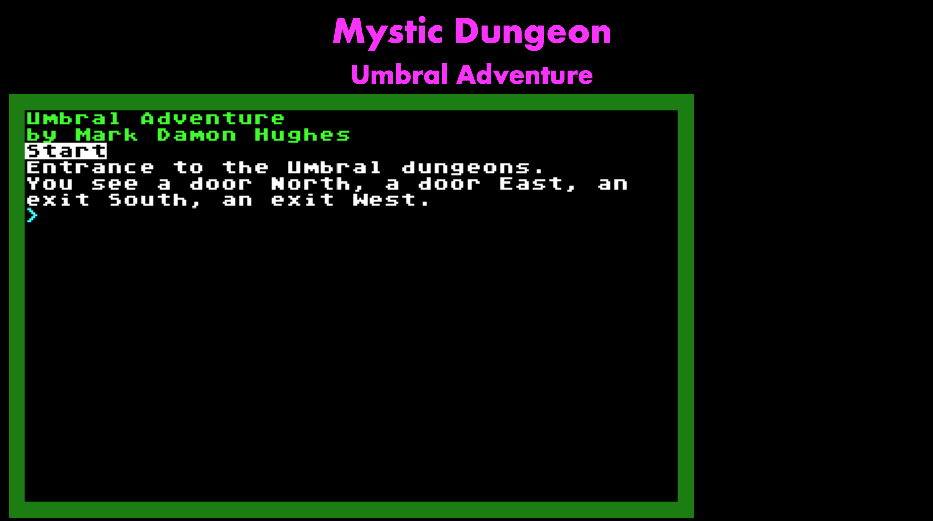 I've finally got my web games/tech demo site MysticDungeon fully running SSL, a proper Node & database server, and all the existing games ported to my common "Learn2JS" framework. High scores and hit counters work for all of them; I haven't set up a really stable migration tool yet but that's on the TODO list before anything more serious gets stored there.

If you run into any bugs, let me know here or on fediverse.

Upcoming will be getting a couple features in PortalWorlds finished, then the rest of the Umbral Adventure world, and some more tools in Grimoire, which will be a tabletop RPG journal/toolkit, more for Referees to use as a virtual screen/notebook than as a coop gaming tool, but you could screen-share it if you needed to. Proper user accounts instead of an unverified screen name will be part of that.

I'm still thinking about if I should replace the old BBS with a forum, or what. Rebuilding the Mystic Dungeon game is on the list, that's part of what the Umbral Atari-like screen is for; nice ATASCII line-drawing characters instead of the few ANSI chars it supported.

I've just started drawing some "art", adapting an old pixel font nerds of a certain age will recognize. Finally, something my 1980s pixel art skills are good for!

Figure I'll make a metroidvania dungeon game; I don't mind action, I'm just not good at dealing with real-time animation of giant art sets. This'll make a good test of my Electron framework, before I ship something big in it.

Update: Realized there's an old game I loved to match the art that I'd like to do (an update/homage, not a straight ripoff), and it's not a metroidvania. Making a ton of level maps is beyond my current spare time, and procedural metroidvania's a hard research problem.

Day One Goes Premium Subscription
and of course the mob outrage in App Store ratings is what you'd expect: MacDrifter.

And this is why I only do bare minimum maintenance of my App Store software now. I released Brigand as free with a $10 unlock, and got savaged for it, so I pulled it. If Nintendo can't make that work with Mario, Apple giving them the front page, and millions in advertising, I sure can't. I love Brigand, but unless I put in more work changing the business model, I can't sell it; sunk cost fallacy tells me not to do that.

Productivity software should cost more than a game, but very few on iOS are willing to pay up front every single new version.

Apple doesn't let you give old customers an upgrade price, and presumably never will; maybe an upgrade killed Phil Schiller's pet/child/Camaro in front of him, or something, given the 9 years he's heard developers request this feature and told us to pound sand. And Apple does nobody any favors by Sherlocking and undercutting developers with "free" or cheap productivity apps.

The older solution of releasing a new numbered version and abandoning the old one every year or so was completely user-hostile. I just refused to do it, and would always switch apps whenever someone tried, and often found a better app by doing this.

Maybe the subscription model is terrible, but it's less terrible than anything else going on.

Michael Tsai wonders if the hostile reviews are from prices going up, but they're just catching up to desktop/web service prices, usually because a subscription gets you cross-platform access now.

Long-term, I think the App Store will be seen as the worst-managed disaster in the history of software. It went from a nice slot machine for indie devs and gallery for a few professional companies, to a predatory flea market full of thieves and frauds. Trying to tell anyone you make real software and here's a reasonable price, in that environment, is a waste of time.