Pythonista lets you use your pocket UNIX workstation as a workstation. I use Pythonista, if not every day, very heavily on the days I use it. As always it's crippling of Apple that there's no upgrade pricing, so I can't give him more money every year that I keep using it. The new keyboard module is an interesting script launcher, but I already wrap a bunch of utilities in a main menu program.

There should really be more of these mobile programming environments. In the early days, Apple severely restricted you from shipping one; you could kind of cheat with JavaScript, and a few games snuck in some bytecode interpreters, but scripting was right out. They loosened up eventually, but are still dicks about you saving code anywhere it could be shared, so for example I have to keep my Pythonista stuff in iCloud, not DropBox where it'd make more sense.

I dunno if the 'droids have anything comparable, I'm sure they can root their phone and try to use vi in a busybox shell, but that's not a reasonable work environment for a thumb-sized on-screen keyboard.

Yo I'm'a be a bounty hunter like Boba Fett when he was still cool, yo!

"It sounds like you don’t get paid until (and unless) Apple fixes the bug."

Oh, you're never getting paid.

I don't at all like that it's buried in the beta webapp. But it works, once you get thru Apple's aggressively defensive login system (which, sure, it protects all my stuff; be defensive).

So clearly it only tracks Apple Music playtime; I mostly use my local music library. Anything here is stuff I don't own, or on an Apple playlist. And the two extremes: '80s pop music, and '90s industrial/metal. I don't understand some of these, why are there 5 plays of Rammstein's DEUTSCHLAND but nothing else off that album? I much prefer Engel. 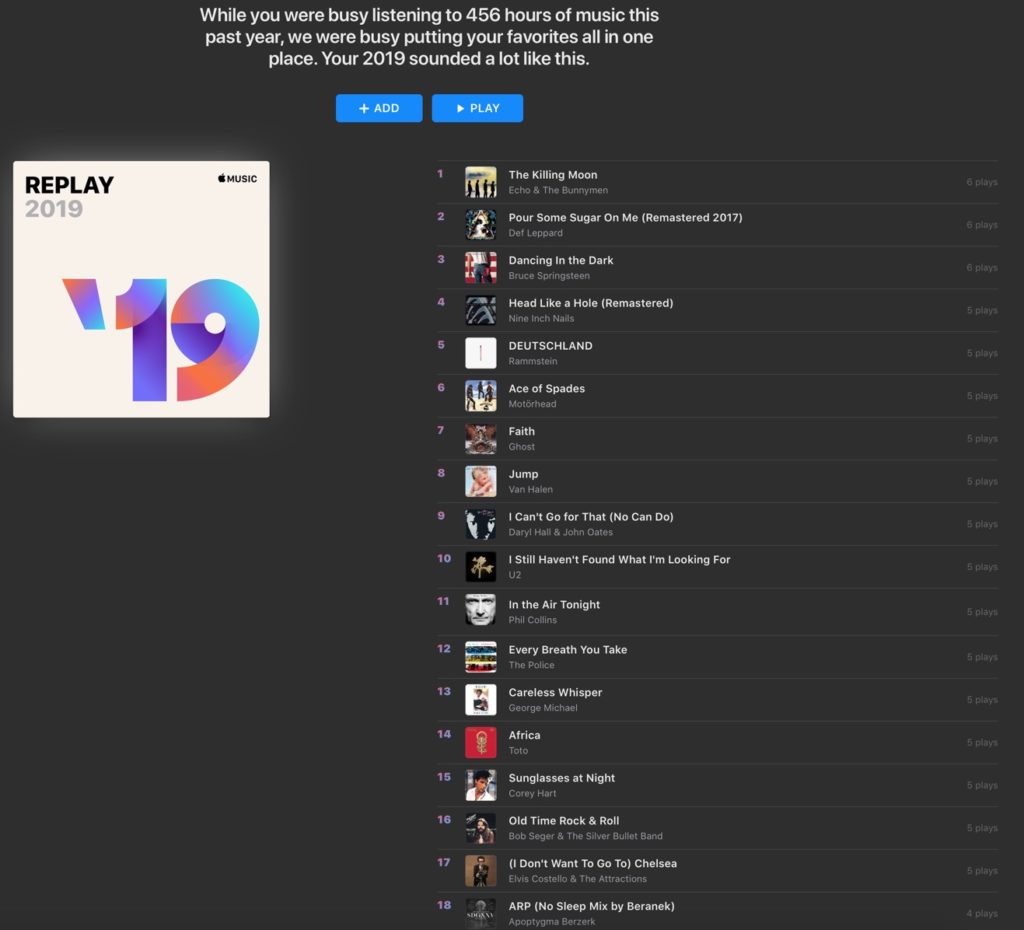 So far this is not a service I'll be renewing. There's nothing here I couldn't get better for that money.

OK, not EOL yet, but soon. Long before any rational person would switch to an untested, incompatible new OS version. Among other things, anyone using Adobe software can't go to Catalina.

The policy I like is to support the last two or three major OS releases. There are good techniques in Objective-C to support testing for new features and falling back if you don't have them; I don't think most of those work in Swift, because Swift's an amateur hour language.

Happily, I use Feedbin to sync my RSS feeds rather than keep them all local, so when NNW stops updating I can just go back to a working web interface. Sad that Brent keeps resurrecting and killing his app, but that's what he gets for chasing Apple's tail.

This is why the web beats native applications. You can indeed make a better interface in native code; you can't maintain it, and you can't port it. The native dev is constantly chasing a new API that breaks everything past, and fighting with garbage tools like Xcode. The web dev just needs ed or another text editor, and only has to target the browser, which is a moving target but has backfills and a compatibility policy, and native browsers generally work on the last two major OS releases. Firefox is a UI shitshow, but still supports OS X 10.9 Mavericks (2013); Safari obviously is part of the OS, and the last few changes are making me strongly consider moving off it, but this Mojave version will keep browsing the web just fine long after Catalina is released.

The ideal of cross-platform languages ever since UCSD Pascal is to get the best of both worlds, write code once and have it compile and run everywhere, and ignore underlying OS changes.

I'm sure there's a hundred other pitfalls waiting. Anyone "upgrading" to Catalina on their main work Mac before at least a year is a lunatic. Half the software you use hasn't been tested on that, lazy devs will only now even be putting it on a second machine. You're a long way from safe.

So I hit upgrade, and I regret everything.

Obviously, this is the release where they break Safari Extensions, they now have to be apps. uBlock Origin is dead. I've installed Ghostery Lite for the moment but I have no real solution for the future; "uBlock" is an ancient unrelated fork that allows advertising, fuck those criminal scum.

The other thing is tab management is broken: Cmd-T now makes a tab after the current, instead of at the end of the tab list, so now my tabs are all but unmanageable. I'm going to file a Radar, but throwing bits down the black hole isn't going to fix it I think.

Right now it's churning with CPU time being wasted on background tabs, and I'm hoping that's just because I rebooted and reloaded all my tabs, and not something it'll continue doing.

Yeah, obviously I could change to another browser. But I hate every other browser. Chrome's created and operated by a criminal, advertising-supported organization. Firefox is just awful to use, because everyone at Mozilla uses Linux and hates users. Opera's not terrible, but it's not good, and just a wrapper over Chromium so probably just as corrupted as Chrome itself.

I've been running it for the last day, and it's stable and fast.

Syncing to my Feedbin account works great; the Feedbin web UI is usable, but especially the last redesign leaves me somewhat annoyed, and it has very limited keybindings. NNW also has local OPML subscriptions, if you don't need to sync and don't mind waiting forever for it to fetch from every blog and deal with everyone's crazy broken RSS. I like Feedbin centralizing that nonsense, just replacing the UI has been a problem.

NNW has everything keyboard-driven, but I'm not enamored of some of its choices (Help, Keyboard Shortcuts). I'd prefer vi keys, and those are a dangerous habit with Brent's keybindings (l is mark all as read, next; k is mark all as read; I almost never want to do that, and want to hide those behind a warning). I'll either get used to them or see if I can rebind them from system settings. The code's on github, so worst case I can just fork it and hack my own keys in.

The reader's pretty nice. Stays in dark mode when I have that selected; I've seen a couple feeds insert their own background image/color which is obnoxious, but if that's what the feed contains, it should probably show it.

I miss in-app browser tabs. For webcomics (which rarely put full-size images in the feed) I often launch a bunch of them into their own tabs and then read them, which in Feedbin's web UI is (while more-comics? (middle-click title) (press 'space "next comic")) and in NNW is (while more-comics? (press 'b "open the current comic in browser") (press 'alt-tab "back") (press 'space "next comic")). Maybe it's possible to open a browser tab in the background?

A million times better than the years-late, rarely-updated Black Pixel release which had their own broken sync server.

Update: One feature I'm loving is drag-and-drop blogroll reorganization. Got a feed somewhere wrong? Drag. Drop. Synced. Fucking done. In Feedbin, you have to have the feed visible (unread or switched to "all" mode), the old way you'd hit Tags (folders) and just change the text in the dialog box, but they changed it to an Edit button which pops up a giant list of all your tags (folders) and you switch them on/off. Utterly awful if you use a lot of tags (folders) like I do. And yes, I'm annoyed perpetually by the "tags" concept, which doesn't exist in OPML, only folders.