So I like to watch videos of the games I play; maybe learn something, maybe just recognize "oh, I do that too". Parasocial but shared-ish experience.

The problem with a free, open source, often Linux-based game is, nobody has working sound. And they really don't have working mics on their broken dumpster-dived Thinkpads, or video editing software. So the MineTest youstubes are mostly divided into:

There was another one, professionally done but rather boring where he just dug tunnels in his mine, laid down glass slab floors, and rarely came up to add to a kinda artsy tower, 100+ episodes… and it's gone. He's vanished, taken down his videos? And I'm drawing a blank on his name now so I can't even find out what happened.

If you have other suggestions, that are not 1-3, comment/tell me on fedi.

One of the games (modpacks) for MineTest I've been trying, is SurviveTest. It's much closer to vanilla MineTest Game, but with a good selection of mods to make a survival/mining game, and the developer is updating it regularly, and making youtube videos (in Portuguese, but you get the gist).

The Awards panel is pretty good at driving you thru the game. Some things are less obvious, tho.

I mostly just swordfight sharks that jump fences to get into my garden every morning (that is a sentence nobody sane would ever write).

You can also combine signs with fish to make trophies, and for servers there's a fishing tournament UI.

Bread is more realistic: 4 wheat make 1 dough, cook dough and it becomes bread. The pies & cookies are fun, but take much more resources than they're worth, and I haven't been able to reliably farm chickens for eggs yet. Soups are a pain, they don't stack.

The bottle rack W-W-W, B-B-B, W-W-W (Wood, empty Bottles) gives an OK-looking shelf for 2 rows of bottles, no indicator as to how full it is but it looks nice enough next to a bookshelf, which holds a similar number of books.

The MineClone2 "map" is basically just a compass, it shows a picture of the local chunks but can't be resized. So… where have I been? Where are my bases?

There's a couple cartography mods, but they seem to only make small maps for use in-game. There's a minetestmapper.py in the base game's distro, but it's python2, requires an obsolete version of PIL, 2to3 didn't fix it.

So there is this:

SIGH, C++ and libraries. I actually have libgd installed with MacPorts, gd2, but it wasn't found at first, adjusted my env vars and now:

Grinds for half an hour, get a full white image, because all the MineClone2 nodes are unknown, so copied colors.txt to my-colors.txt, and add this to the end:

Make a script, my-map.zsh (change mapname, worlddir to wherever yours are):

Repeat, half an hour… I still get 227 lines of unknown blocks, but the base map generates OK now, and looks good enough. I hate the sand color, and I dunno what the dark areas are. OOH, what's that structure at the far west? I'm planning to skyrail far west, then go there and the unexplored village W-SW next time. And I'll add more to my-colors.txt file and post that sometime. 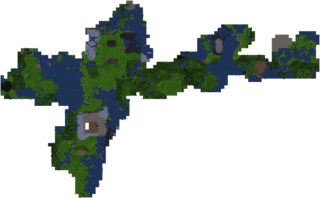 So I hate the default adventurer skins, even if it's usually covered by armor and I use first-person camera. I have my own skin. But MineTest has no built-in config for skins! Mods to the rescue.

On your world select, hit Select Mods, Find More Mods, and search for skinsdb, and smart inventory, install both.

Back to menu, select each of those and Enable. Save. 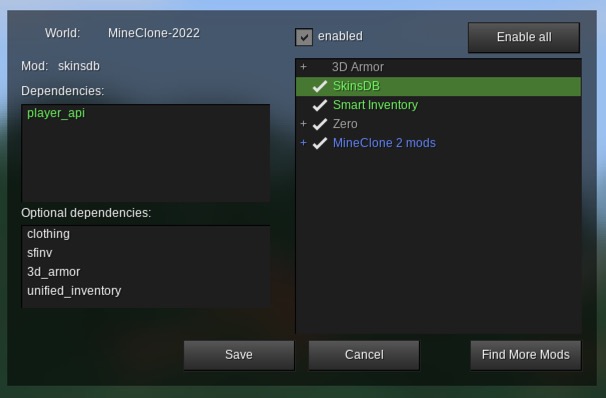 This only seems to work with MC 1.0 avatars, even tho skinsdb says it works with MC 1.8; if you have multiple layers, remove those and resave without them. I tried installing the 3d_armor mod, which might enable that, and it has broken dependencies. 🙁

Play Game, and in game, open inventory, click the skin icon, and at the bottom of the big new Smart Inventory screen, skin icon. Select, done. 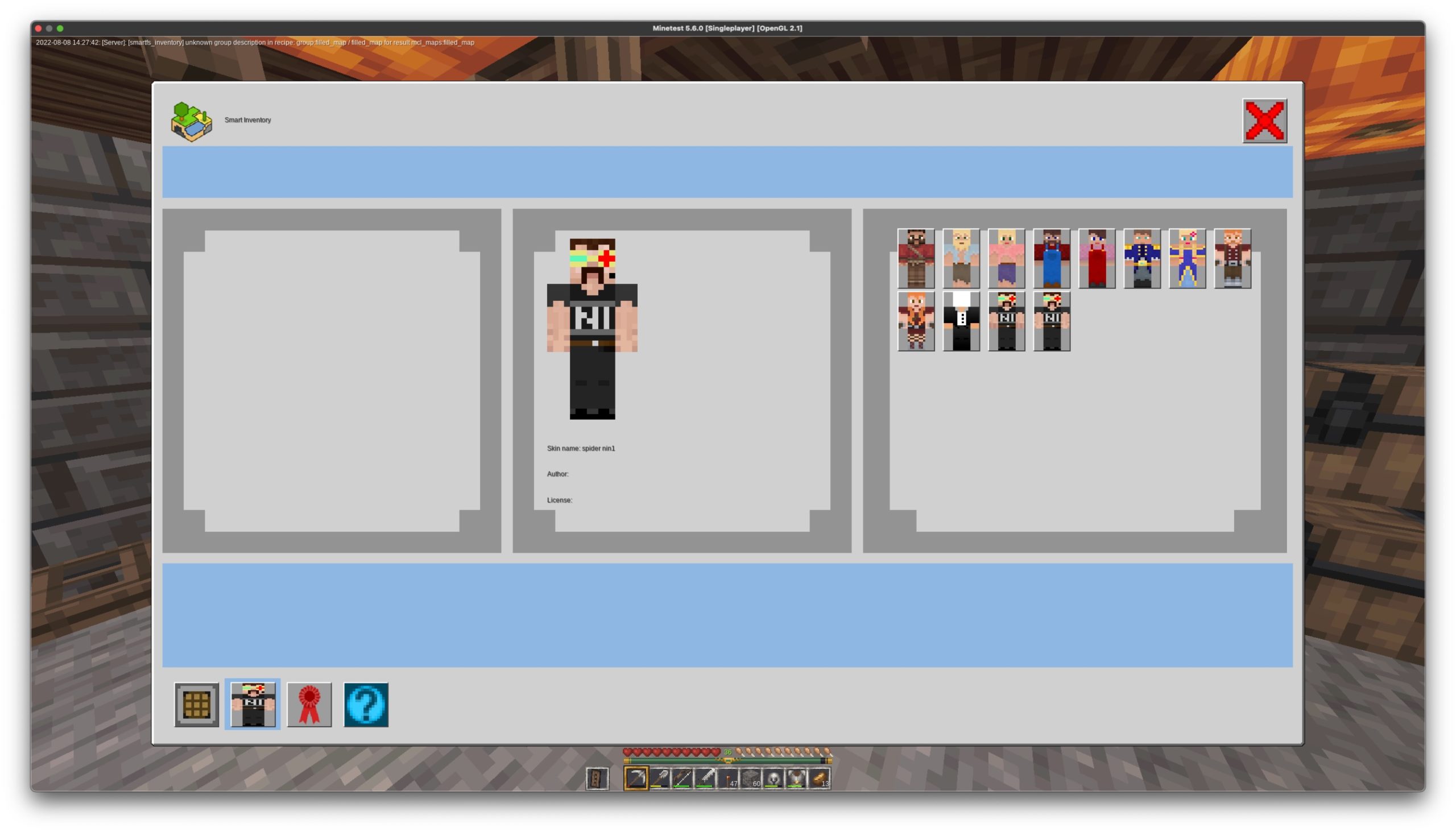 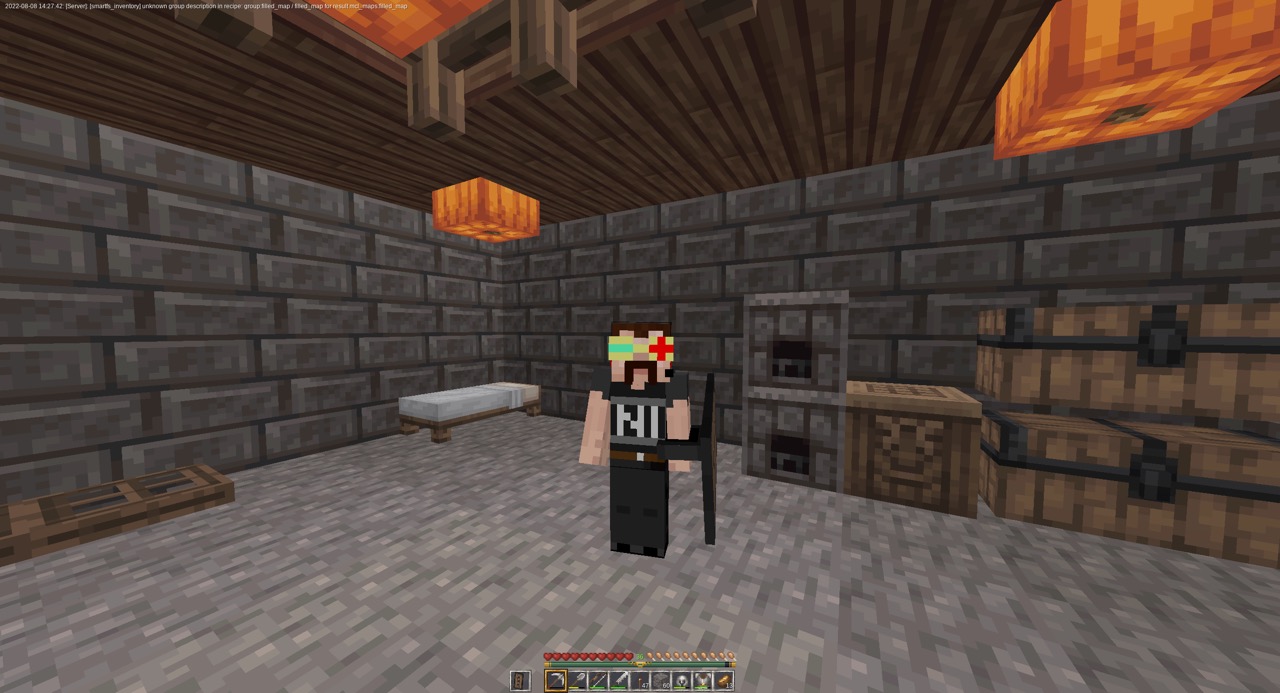 (The skin was originally a Spider Jerusalem skin, which I wanted a Nine Inch Nails shirt on, but there's only room for NI, which makes it even better.)

So, ever since Microsoft bought Mojang, they've been boiling the frog, and finally with the "Xbox accounts" and 1.19.2 the Java edition has reached surveillance state nightmare (however ludicrous that sounds for a game… it's still a game we play) parity with Xbox Live Arcade (aka "NAMBLA") and the inferior mobile/"Bedrock" edition, and it's really time to look for alternatives.

One such is MineTest, which is an open source blocky game engine, with easy modding in Lua. The base MineTestGame is a very simple peaceful/creative mode, which isn't that interesting, but mods change everything. One of the mod packs ("games") is MineClone2; it aims to recreate MC 1.12.2 with some improvements, while MineClone5 (I guess 3 & 4 fell into a swamp) is a much less stable fork that chases current features. Other games aren't concerning themselves with MC-like-ness at all, I'll look at some of those later.

Download the client from the MineTest page, then at the bottom bar hit + and type in MineClone, hit + on MC2. Back on the Main Menu, select the 2-grass-block icon from the bottom, the screen should change to show a MC2 logo, hit New to make a new world.

When I started testing MineTest, it was very laggy, the Mac display & input was completely broken. In 5.4, it got up to usable but not fun, with a really horrible input lag. In 5.6, just released on the 4th, it's actually playable! FPS rate is a little low (15-30 instead of the 30-60+ I expect), picking up/moving inventory can be sluggish, but the game is on par with any older edition of MC now.

MineClone2 can have some remarkable terrain, tho there's something a little off, I get broken Nether portals every few hundred meters in plains. The mobs are dumb but as dangerous as MC and I'm less skilled here. Villagers work, I don't have a proper screenshot of the village I've started trading with, I need to clear some land and fence it off, after I set up my next base near it. Animals are a bit odd, they're persistent but spawn in randomly on grass when you enter the area, there's a river below my base, and it's constantly splashing with sheep & llamas that fall in; I should build a lava blade trap for them. I've made a map, but it's uselessly small and can't be resized, but does point back home. The built-in minimap (hit M, repeatedly to cycle views) is very useful.

By default there's no access to debug. You can open the console, but no command shows coords AFAICT.

Or whatever keys you like for those. Now I can hit F3 and get a teeny text status of FPS & pos, hit it again and get full debug/lag spike data.

What I'd like is a bit more of Life in the Woods, or Super Hostile type modpacks, make survival hard and more complex, but with a gentler introduction than Feed the Beast etc. There is Exile in the ContentDB, and I kind of glazed over looking at the wiki, my one test of it I punched some sticks but couldn't make anything, then got blown up, but I'll run at it again.

There's not a lot of Youstubes or Twitches of MineTest yet, but there's a few "punch wood" demos, and a lot of what you know about MC just works in MineClone2.