You know how Rob Pike made Go as a weapon for controlling junior devs who can't be trusted with sharp objects?

The key point here is our programmers are Googlers, they’re not researchers.
They’re typically, fairly young, fresh out of school, probably learned Java,
maybe learned C or C++, probably learned Python. They’re not capable of
understanding a brilliant language but we want to use them to build good software.
So, the language that we give them has to be easy for them to understand
and easy to adopt.
– Rob Pike, saying the quiet part of a supervillain's monologue out loud

Then USGOV in Snow Crash, trying to use Asherah as a weapon. YT's mom's utterly pointless job. If they can control what's in a programmer's brain, they don't have to worry about intellectual property, because there's no intellect!

In Wild Palms (partly filmed by Kathryn Bigelow, and the WP Reader includes Pat Cadigan, Bruce Sterling, & Thomas Disch! So it's all true!), the mind-eating/immortality computer virus/drug is named Go! "Everything must Go!"

DON'T YOU SEE? IT'S ALL CONNECTED?! 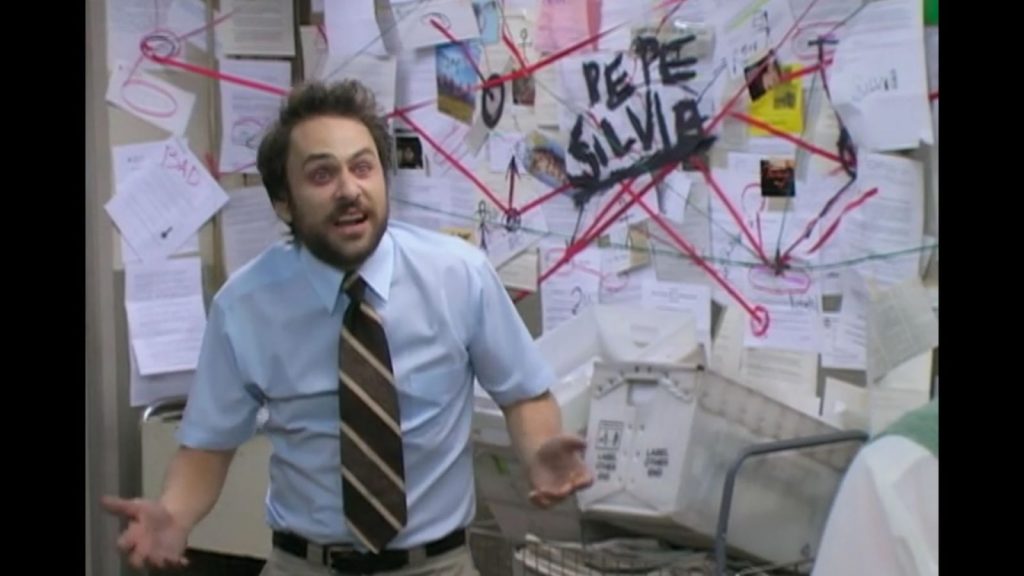 Whew. So glad I finally connected those dots. It's been bugging me all week.

Keyboard is almost precisely the size & layout of the Apple Magic Keyboard, which is fine with me. The key travel's bad, like the lawsuit butterfly keyboard. I'm moderately unpleased with the keyboard touch, but it's definitely usable. I switch over here to my Magic Keyboard, and it's night and day in quality. Mouse is nice enough; it's not a hi-DPI gaming mouse, but it's a good workstation mouse. Aesthetics are fine, I'd prefer black to white, but the raspberry red highlights are pleasing.

I've grown accustomed to Raspberry Pi OS (née raspbian). It's still a lame linux, but they've mostly got pulseaudio working(!) after 20 years of it being not functional, wifi mostly stays up, the desktop environment isn't awful. It's no Mac OS X Tiger, but nothing is anymore. There's less complaining from me using it, than hours of playing sysadmin would cause.

Not RasPi's problem, but I got a new, overly large portable LCD for use with this, FANGOR 15.6"; it's basically impossible to find any LCD >7" but <15" which has a decent rez (1920x1080) and color reproduction; the random-Chinese-fake-company plastic 10" on my RasPi4 is just awful, the worst screen I've ever used. RasPi4 is now on my bookshelf, waiting to be moved into a closet where it will live forever as a headless server that I don't have to hear the fan whine.

Hobomax has redesigned their site, the stupid profile select now takes 10 seconds to be clickable, and I only have one profile so it's utterly pointless. And now the video player "full screen" maxes out at 1900x800, which is 2/3 of my monitor. WTF. I can't watch it on my TV, because Hobomax doesn't have a PS3 app, and I'm not buying another console for a while. Anyway, personal watching woes aside.

Why is Krypton all black and medieval? It's a gleaming forest of crystal spires in ALL the comic art and the Bottle City of Kandor. They're effete but civilized. Why is Jor-El riding a World of Warcraft Windrider™? Why are babies in pods? The "Codex" is a magic skull? I hate this design. It's like they watched Kenneth Brannagh's Thor (2011) and said "We don't want to be sleek and Kirby-esque like Asgard! Make it all shitty and ugly!" Really that's the theme for all the DCU movies.

Why is General Zod chasing Jor-El instead of securing their rebellion? Why are they frozen into little flying penises, instead of sent to the Phantom Zone? Much later they call the prison ship the PZ but it's very poor setting exposition.

"People are afraid of what they don't understand", says Pa Kent to whiny baby Clark. People are afraid of a guy who can punch you into a fine red mist, laser-fry your brain, give you cancer with X-ray vision, demolish your truck with his bare hands. One second of drunkenness or anger or lust, and everyone dies. Clark's a damned nuclear weapon with a dick, and we all know it. And occasionally Snyder manages to show that.

Jor-El's program/ghost takes over a random abandoned scoutship, and gives Kal-El the suit. Which looks nothing like Earth or Kryptonian fashion. The comics made sense: Kryptonians wore skin-tight spandex and capes in bright colors. That's why Supergirl looks like she does, cheerleader outfit with giant boob window is demure Krypton fashion.

At least in flight the film quality gets better, but as soon as it's on the ground again it's back to even darker cyan/orange. I'm having a hard time looking at this. I want to pluck out the eyes of every film editor who does this.

The "Clark bums around like The Incredible Hulk TV show" parts would be a good movie by themselves, or a long TV series with the saddest ending music ever.

Lois (Amy Adams) is adequate. We don't see her do anything except Superman, so there's no great love story, no hyper-competent reporter thing. She does her own photos instead of having a Jimmy Olsen, which is weird; and her camera gets busted, but she doesn't retrieve the flash card which would give her actual evidence. She's certainly no Margot Kidder.

Kal-El gets weak when he breathes Kryptonian air, not Kryptonite. Apparently he can fly in space without Earth air. The Kryptonians who haven't adapted are the reverse? It makes no sense. Yellow sunlight is what makes Superman and Supergirl so powerful, and people of Kandor when they come out of the bottle.

Fight scenes finally start at 90 minutes or so. And it's exactly like the Batman Arkham games, lotta fast swooshing between targets, hit them in ways that should break anything material, and it just flops a ragdoll around and they stand back up.

Forget all the little SimCity people running from the terraforming of Earth, think of the financial losses from bombing New York! If there's one thing I've learned from The Avengers and this movie, it's that aliens love giant robot tentacles coming from nowhere. Those are the greatest weapons ever. Fuck missiles, nukes, lasers, get some robot tentacles.

Also the message of these films is always that Humans can't solve their own problems, even disaster recovery, without a local demigod to save us. Perry White (Laurence Fishburne!) & intern Jenny have a moment, just waiting to die is all they can do.

Zod has a speech near the end which is actually kind of poignant, and if any of that was portrayed in the previous 2 hours, he'd be a good villain, instead of a mook. He's no Terence Stamp, of "KNEEL BEFORE ZOD!" fame. The cute alien chick (Antje Traue, last seen in Dark) claims they have no morality, which contradicts Zod.

Every fight they find more tissue-paper buildings to go thru, even ludicrously going up into space to smash thru a satellite. Just silly.

The ending's so weird. Kal-El's sent all his fellow Kryptonians to a fate worse than death, but killing one is just traumatic.

★★★☆☆ — lost a star for the fucking awful color, half a star for how dull and fighty the end is, after the first half was OK. Nothing fun, just a slugfest.

Most all of these are out of print, or so obscure that apparently I'm the only person I know who's ever read them.

In all cases, I suggest grabbing the torrent and then just keeping all the cbz, read with your comic reader of choice.

An English-language (mostly), Spanish-made mini-series on hobomax. Remarkably good actors, cinematography, for the most part… though indoors scenes are heavily tinted cyan/orange. The disease of monochromism is spreading. I assume everything outdoors was shot in Norway, because it only shows Antarctic panoramas from stock footage, anything with characters is in a generic white void.

Science team goes to Antarctica. We see them goofing off, last day before winter. They watch John Carpenter's "The Thing", firmly lampshading what kind of show this is: Creepy drama, but with a few laughs. Team leader Johan (Alexandre Willaume) gets to go home for a break, his wife Aniika (Laura Bach) stays behind to work with pompous scientist Arthur Wilde (John Lynch, the poor man's John Lithgow).

Contact with the base is cut off. When they get back, almost everyone is dead. A survivor starts telling a story, and then more and more facts don't match up, and contrary stories are told.

So, the science in this: Arthur claims he's invented a bacteria that's 153x better than photosynthesis at scrubbing CO2 from the air, so he's solved global warming. If they'd said "10%", or even "100%", OK, maybe; 153x is so far past what's physically possible it's pure fantasy. Plants use sunlight to get energy to crack CO2 for carbon and oxygen; what's this bacteria using, nuclear fission? And even if you had it, you couldn't release it, it'd run away and convert the entire atmosphere to oxygen, deadly to most current life.

Each episode, Maggie remembers more of her story, tells Johan, he runs around looking for evidence, mostly doesn't find any.

The problem is, the "mystery" doesn't hold up, it's out of character for at least 2 people directly involved, and 2 covering it up. The original crime is petty, and doesn't need a giant base-destroying coverup. The murders in the new base are just deranged and over the top, completely out of anyone's league who's accused of them.

I'd been wondering since the survivor story started if they'd do a Keyser Soze flip at the end, and sure enough the girl is who I thought she was, and even does a "this physical disorder is all an act" scene. But I don't find her "true" story plausible either, especially Nils' death is just impossible, and there's no way for her collaborator to not realize what's happening.