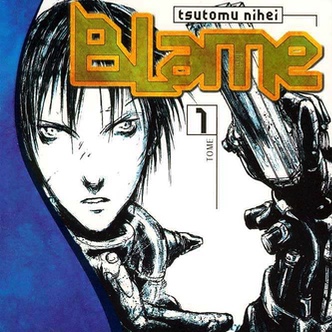 BLAME! was a manga by Tsutomu Nihei from the late '90s/early '00s, like the result of listening to the Terminator soundtrack and Front Line Assembly and drawing that. A weird loner named Killy with an overpowered gravity gun, wanders an infinitely large ruined city, infested with Exterminators that want to kill all the unauthorized Humans, as he searches for someone with the Net Terminal Gene which would allow Humans to connect to the city again. It's bitter and mostly silent, harsh industrial lines and weird kabuki-masked spidery bots and fake people.

It's not quite "cyberpunk", because it's not the street finding new uses for (military-corporate) technology, but techno-savages trying to survive the street killing them. Cyber-apocalyptic, like Terminator's future, Screamers, or Hardware.

What I didn't know is there was a movie made, available on Netflix!

And, uh, it's the manga. The point of view characters are Human survivors in a village, and why they were mostly safe (but dying out) until Killy shows up is the main plot. The city is as brutal and unliveable as the manga, and the technical scenes are fantastic. Killy is quiet and blank, because he knows they're screwed and they don't have what he wants, but he'll help as long as it's practical and he might get some advantage over Safeguard. Very slight nitpicks: There's only a couple of bot designs instead of the rampant cyberization of Human and near-Human and the whole environment of the manga. There's a plot twist I didn't see any clues for, but I might've spaced out at some run-and-scream bit. There's a lack of discussion of the nature and motives of Cibo, that I think was also needed. Maybe the Man in Black Rides Off Into the Sunset ending and denouement is a little trite for the manga which is so harsh and unforgiving. But for anime adaptation of an impossibly harsh and inhuman source material, I've never seen better.