Opening Video: Emotional music. Mortuary full of coffins. Crying mourners. THEN! Light shines from one casket after another: iDeath! The iPhone app that live-streams to and from inside your casket so your loved ones never have to let you go! SOMBER!

Item 0: Apple's best year ever, look at this literal mountain of cash and gold they can swim in like Scrooge McDuck, at the new Apple spaceship campus! KA-CHING!

Item 1: Apple announces the end of mechanical keyboards. If you filthy heathens in non-sterile, non-white-void rooms can't take care not to spill Coke (or coke), crumbs, hair, or microscopic dust particles into Jony IVE-1138's perfect butterfly switches, jamming them up, and then have the audacity to sue, then you just don't deserve them. All replacement and new-issue keyboards will be sealed-in, membrane keyboards like the Atari 400. COURAGE!

Sub-Item: Apple is responding to Developer's Union by hiring the Pinkerton Agency. There will be no trials of any kind. BEATINGS FOR ALL!

Item 3: New Macs! Finally, the new Mac-itecture is here: ARM, iOS, with an Intel emulator that runs up to 20% as fast as a real Intel chip in this rigged demo. Available 2019 or 2020, they really want to get this right, so all existing Macs are EOL today. POWER!

Item 4: Apple announces all-new game development tools, streaming from a home server or iCloud Games server, just like Steam Link but, you know, for the children!, with Apple's 30% cut and no expensive $9.99 games, only "free" IAP games allowed. Obsolete native iOS games will be phased out over the next 6 weeks as OpenGL is deprecated and then unsupported, and Metal only supported on MacTruck platforms. BEEP BOOP (nobody at Apple has ever played a videogame, so this presentation's kind of awkward).

One More Thing: HomePod now supports stereo, a mere 87 years after radio, records, and movies went stereo. Surprise announcements of vinyl LP and 8-track addons for the HomePod Hi-Fi shipping this Fall, and another U2 album in your iTunes library today! ROCKIN'!

Quite a lineup you got there, Timmy Cook! Don't ask how Steve would run the company, you do it your way!

Sad loss, but: I only ever read a few of his own stories, and not memorable. I grew up reading the first two dozen of his Year's Best SF collections, and a few later; they were a good summary of what happened each year in short SF, then I'd follow up with the authors I liked from them. But I noticed by the '00s that his editorial selections went from 75% white male US/UK writers doing Ben Bova-style SF to over 90%. The early volumes always had some Pat Cadigan, "James Tiptree, Jr", Nancy Kress, and many more, and that faded out by the end; very few non-US/UK writers ever did make it in; I was going to say that no non-white writer ever made it in, but Octavia Butler is in #2 and #5, Steven Barnes in #34, and a few others, maybe 1% representation. I want more variety in "year's best".

The implied vore of these things is troubling, but I'm more disturbed by the lynx wearing a jogging outfit while the bunny's naked.

And the rest of his blog for some more classics from 1975, and then he's been doing entirely new Dope Rider comics.

I'm not that much of a stoner (I prefer different chemical entertainments), but I love westerns, Dia de Muertos, and trippy imagery, and these are all of those at once.

The central message of the film is that Facebook really does care profoundly about false news. The company was slow to realize the pollution building up in News Feed, but now it is committed to cleaning it up.
Not only does Facebook care, it’s got young, dedicated people who are on it. They’re smart, too. John Hegeman, who now runs News Feed, helped build the Vickrey-Clark-Groves auction system for Facebook advertising, which has turned it into one of the most profitable businesses of all time.

See? It's like if the LAPD was shocked, SHOCKED I say, to discover police brutality was real, so they appointed Daryl Gates to oversee human rights. (My other considered analogies went even further into war crimes territory)

Facebook sells ads. Lurid yellow journalism and propaganda from Republicans and their foreign owners buy those ads. Facebook promotes those ads to make more money. Putting the ad guy who made this shit happen in charge of cleaning it up is (more war crimes analogies).

The game progresses VERY quickly at first, such that in 5 days of light playing I'm Level 50, geared up nicely, about ready to do the 5F labyrinth and boss, and then I expect 50-60 grind to be harder, since 6F is I think the top currently. The game devs have a lot to work on, since there's 100 floors in Aincrad.

I spent quite a few hours this morning grinding very difficult 5th floor mobs from 40-50 to get the mats for my level 50 armor and level 45 weapons, which didn't help me at all until I hit those points; it would've taken another day to get everything at 50. 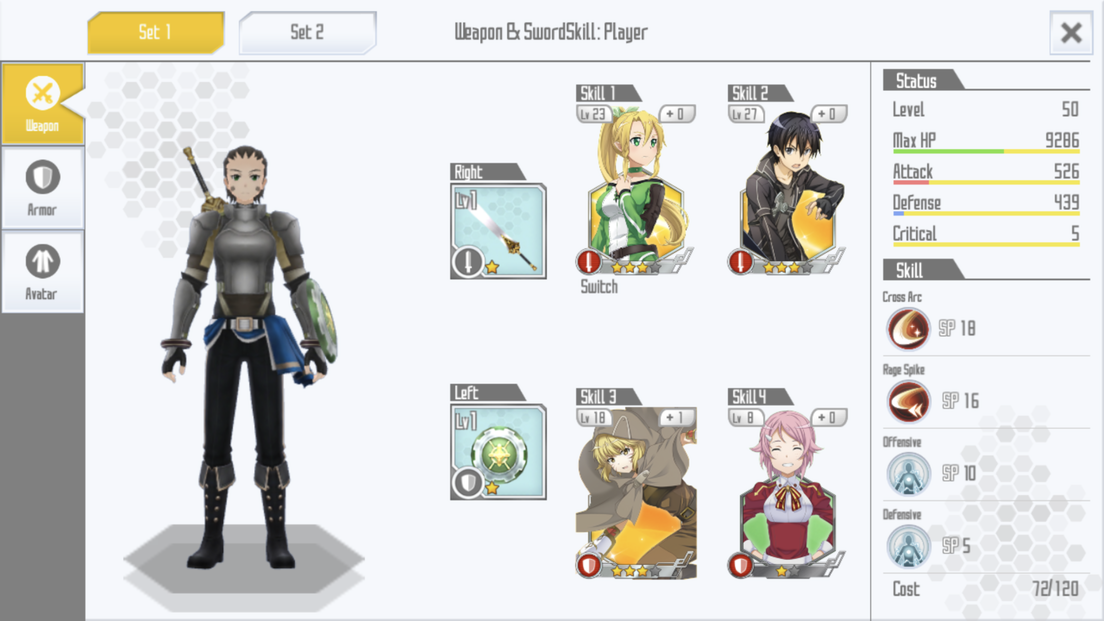 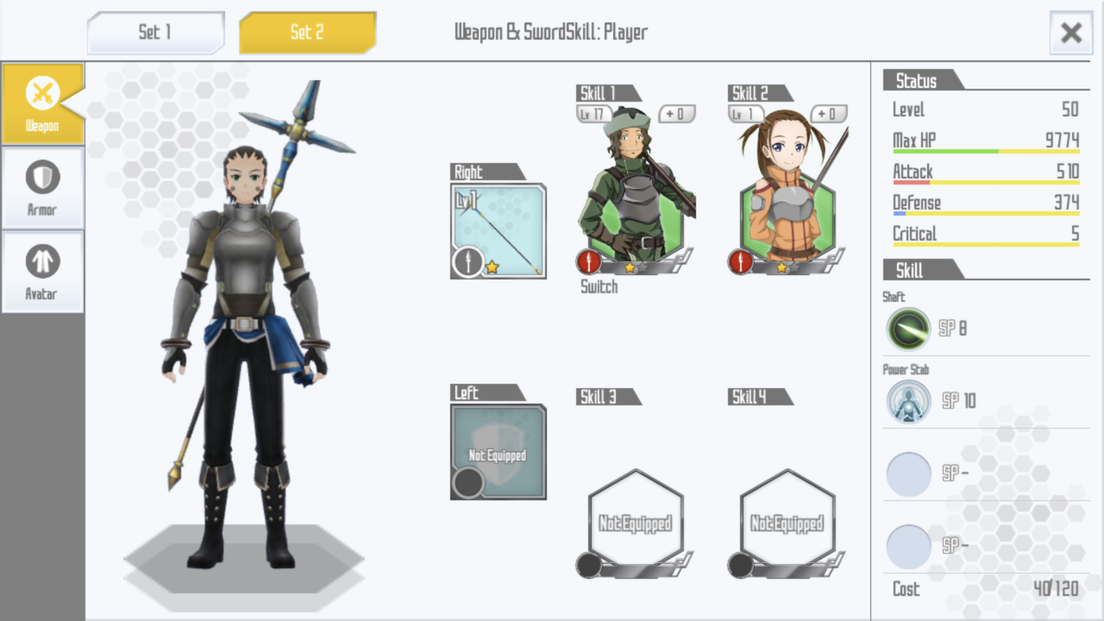 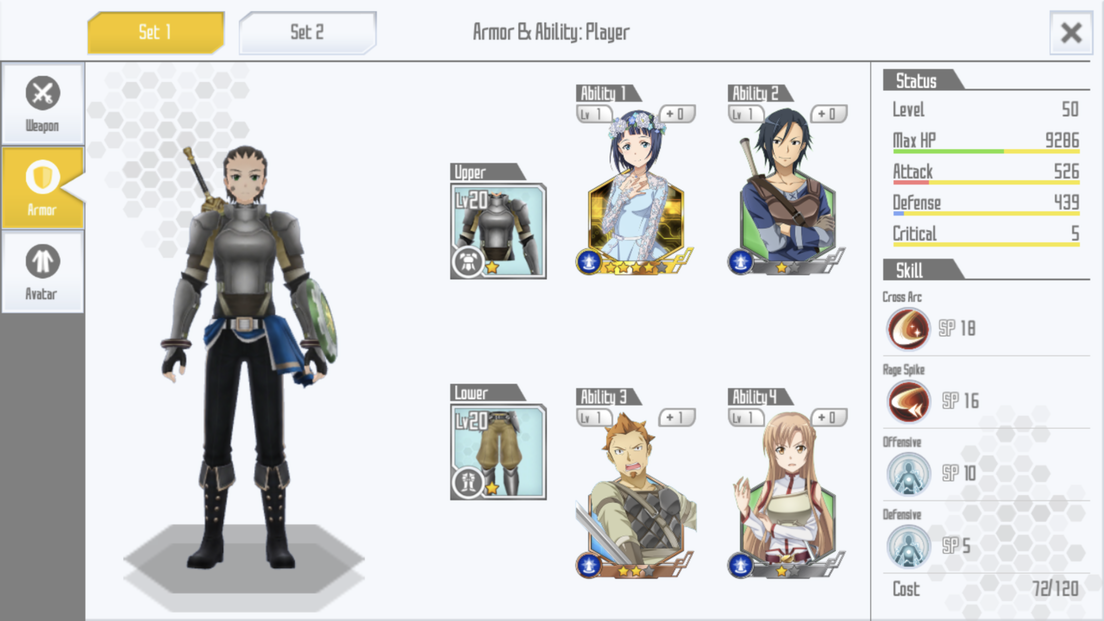 Where the gear says "Lv1" or "Lv20", that's the experience level, which is unrelated to the gear level. While that's obscure, it's kind of interesting, lowbie gear with high experience can be nearly as good as high-level gear with no experience, but won't have as nice a set of "random bonuses".

Why does my heavy chestplate look like it has boobs? The other armors are more angular. I'm using costume pants to cover up the ugly jodhpur lower armor, but I don't have a costume shirt yet.

There's a lot more gear and skill depth than you'd ever expect in a mobile game, it's more like a desktop MMORPG. The fighting game is somewhat simpler, since the tiny UI and a few touch buttons limit it, but positioning and teamwork (even with your invulnerable NPC partner) matters, there are boss mechanics, and even normal mobs can be complicated. Poison and paralysis are incredibly dangerous, as seen in the books and anime; I just swapped out a skill with a good defense bonus for a poison reduction because I want to survive.

The only thing that I'm much disappointed in is, they didn't do permadeath even tho that's the premise of Sword Art Online. When you die, you can use up a (somewhat rare; I have 5 left) recovery crystal and instantly revive, or just return to 1F city. You should be deleted and have to make your character from scratch. If they wanted to be nice, they could let you keep your gear, but lose all experience. As it is, it's like any MMO where you can die a few times.

Only 1F is even slightly detailed, with a city of 3 areas, a town of 2 areas, and 3 fields of easy monsters; floors 2-6 are 2 areas each, but I expect 10F will have another city and multiple fields, since that's how the books and anime are structured. But it is very lovely: 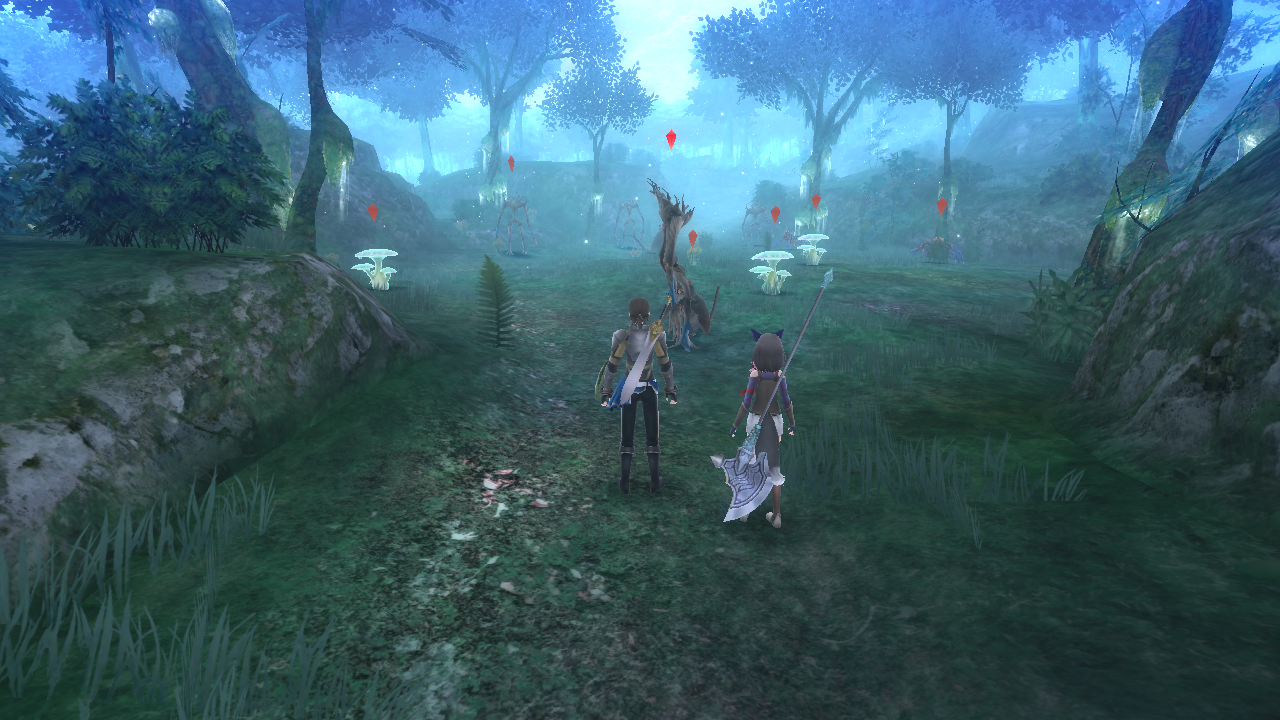 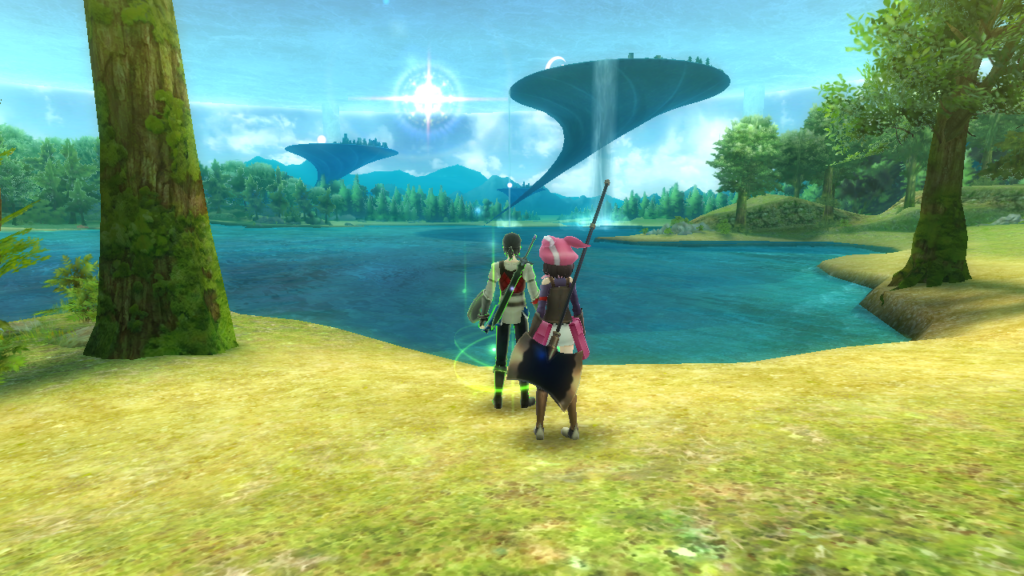 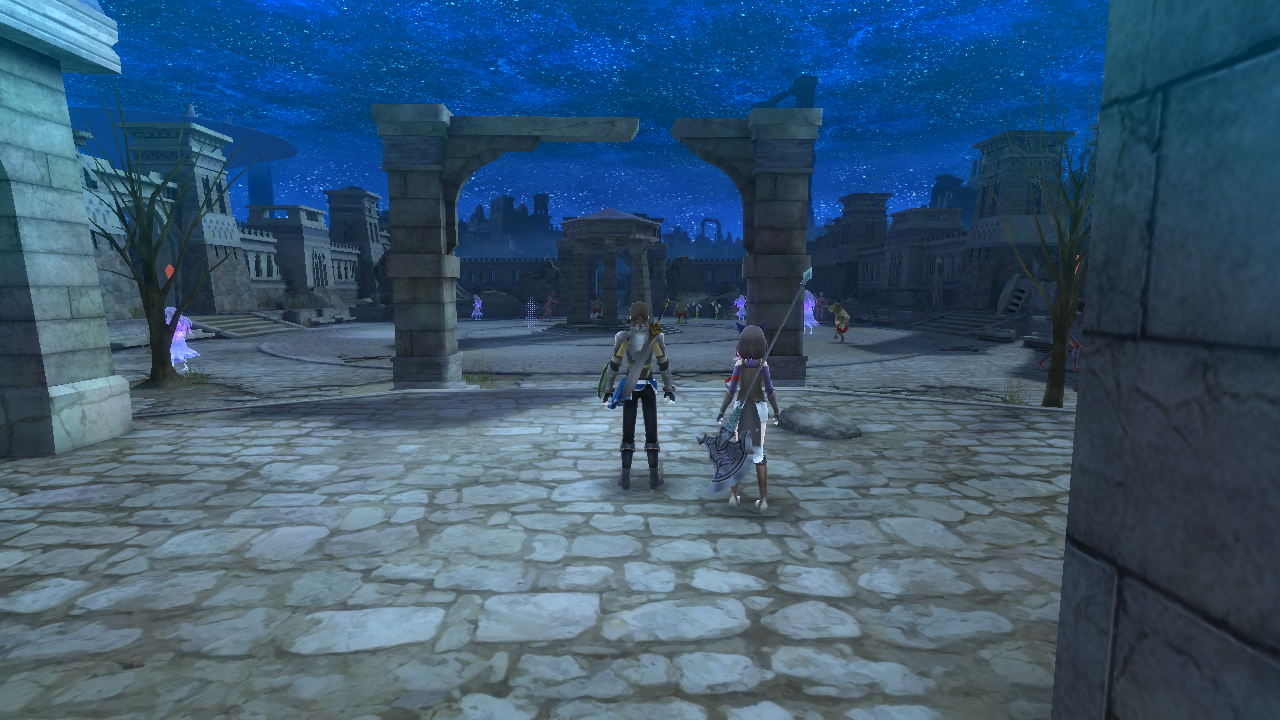 Because I've forgotten a lot of side characters who are showing up in the game, I started reading all the light novels from the fan translations. I'd previously just seen the anime and read the first few manga adapted from the novels, but now I am a bona-fide teenager reading trashy pulp novels, oh, wait, that's exactly what I've always been.