Routinely I want to open the Chez Scheme REPL in my code dir and load my standard libraries; I've been copy-pasting from a Stickies to get my setup each time, because you can't easily set a common prelude from command line. Finally solved that.

(make sure to change the path to wherever you keep your Scheme scripts, and whatever imports you like)

Added alias s=scheme-repl to my .zshrc

Now I can just hit one letter for shortcut:

You can sort of do the same thing with a Chez boot file, but I wasn't able to get it to load libraries from thunderchez, even with --libdirs flag, so screw it.

I'd forgotten everything I ever knew about expect, and the only resources online are exact copies of the same "log into ssh with expect!" (which you should never do! Set up SSH keys for Cthulhu's sake!) tutorial over and over again, so had to read the man page to make even this trivial thing work.

So, on Tuesday, Freenode IRC blew up: FAQ
This is where a lot of software development chat happens. So for a rich, Trumpian, bitcoiner, Korean royalty, asshole to take it over by treachery is just unacceptable.

And so the staff and users have moved over to Libera Chat — as of today, it has more online users than Freenode.

Most of the channels I'm in have moved quickly, so I shut off Freenode this morning. If you need me, I'm in #scheme and others, as mdhughes.

The first project I write in any new language is usually a guess-the-number game, a die roller, or an RPN calculator, then I start collecting those and other toys and utilities into a single "main menu" program, and use that to drive me to develop my libraries, play with different algorithms. Occasionally it's useful, mostly it's just a pile of stuff.

The Scheme version has a couple useful things. I was mostly thinking about old BASIC games, so it's "BasicSS" (SS being the Chez Scheme file extension, not anything more nautical or sinister).

I wrote a fairly malevolent wordsearch generator in the process of testing some file parsing, so here's one for 20 programming languages. I can tell you that B, C, C#, and D are not in my list. I'm doubtful that anyone can find all of them, or even half. 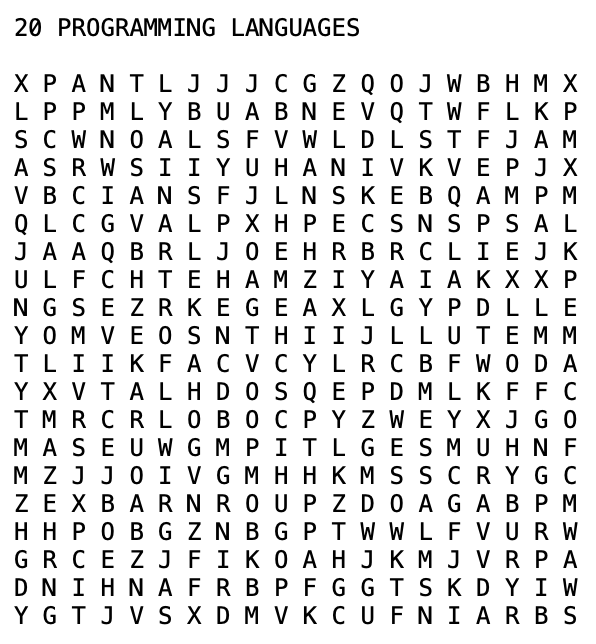 Hangman depends on /usr/share/dict/words, 235,886 lines on my system, which is very unfair:

Seabattle ("you sunk my…") sucks, it just picks targets at random; teaching it some AI would help.

Hurkle, like all the early-'70s "find a monster on a grid" games, is awful, but the map display makes it a little easier to track your shots. "The Hurkle is a Happy Beast" by Theodore Sturgeon is one of his 10% good stories, but it provides only a little context.

Some of this I can release source for, some I probably shouldn't, so it's just a binary for now.

Sure, there's existing code. Somebody Else's Code. It works fine, maybe not as fast as you'd like, or the interface isn't quite right. That's how it often is with me and SRFI-13. Olin Shivers is a skilled Schemer, back when that wasn't cool (OK, it's still not cool), but some of his APIs enshrined in early SRFIs drive me a little nuts, and the implementation is slow because it's so generalized.

So after a few false starts and failed tests, I now have these pretty things: (updated 2020-11-10, enforced hstart, hend boundaries)

Written for Chez Scheme, caveat implementor. BSD license, do what thou wilt. If you find a bug, send me a failing test case.

I don't normally bother with fx (fixnum) operations, but in tight loops it makes a difference over generic numeric tower +, etc.

Big minus: Neither DRRacket nor any built .app launches on the Mac, you have to call them from command line. Gross incompetence & zero testing.

My basic gridtest.rkt demo still takes 100ms to render a frame, needs to be <16ms. But that's interpreting from the shell, and I may look and see if they have a more efficient graphics API.

The bigger problem is that compiling doesn't work with packages, or at least I don't have the right magic invocations:

Well, that's fucked. 40 seconds and a fuck you because it doesn't bring in the dylib it needs.

Obviously I could just say "install Racket, run this script", but that's lame and distributes source, which in a real game I don't want to do.

I really wish we had a front-end to software even half as useful as this in the 21st C, but technology has regressed massively since the '80s and '90s. Some of the old IDEs, before they became bloated "enterprise" software (because giant mega-corporations paid for them, not individual programmers, so the IDE makers serve their paymasters), started to slouch towards this kind of usefulness but fast and small. CodeWarrior, Project Builder/Interface Builder, Borland's Turbo Whatever.

emacs isn't the answer, it's an abandonment of the question; "modern" emacs turned away from the LM zmacs model, it's now just a terrible LISP interpreter with a bad text-only-editor front end; you can make tools in it, but nobody sane will want to use them. I'm perfectly comfortable with the emacs editing keys (well, obviously, Macs use emacs keys for all text areas), but the machinery in it is just broken.

I get excited about Chez Scheme having a nice REPL, with history and can edit multi-line blocks in the REPL, unlike the crappy readline almost every other Scheme uses. But it doesn't do hypertext, it doesn't do graphics, it barely has tab completion (procedure names only), it doesn't have any inline documentation & source inspector; all of those were in the LISP Machine.

When I'm working, I have my text editor (BBEdit or Atom mostly), a terminal with the REPL running and I copy-paste to it, 3-4 PDFs open (R6RS, R6RS-lib, CSUG, sometimes TSPL), and a web browser pointed at the SRFIs. If the Internet connection went down, I'd have to search the SRFI sources to figure out what's in there. I really need a better tool for this.

DrRacket can do some graphics inline, and the tab completion shows documentation hints in the top right corner, but as I note every time, it doesn't really have a REPL because it destroys the interactive environment every time you edit code; utterly useless for code exploration. And in practice, Racket is really horrifyingly slow; it does fine in focused benchmarks but real-world use it just falls over drooling.

The graphics part's sort of irrelevant, and sort of not; the way the LISP Machine worked was getting a "presentation" form for an object, which would render as text or drawings or images, and interacting with it sent messages back to that object. That's probably out of scope for anything except a complete new OS and terminal. A simplistic number-tagged hypertext would be good enough and orders of magnitude easier.

So. I'm not sure what to do here, I don't want to just complain about tools and not do anything about them. I could try to extract the docs to make a hypertext doc system; a lot of text processing on TeX source sounds painful, and a one-off job, I want a more universal solution. It may be possible to hook into Chez's completion to call a help system. Or it could be a standalone program that you feed several doc sources into, and it lets you search against them. Dash does that, but it's Mac and C/Objective-C primarily, and does poorly at other docsets.

Moving my library from Chicken to Chez (when I moved it from Chez to Chicken originally, it was much smaller and I only used a few asserts to test), I discovered that:

So I ended up writing my own:

Here's how it works:

My own test cases come out: 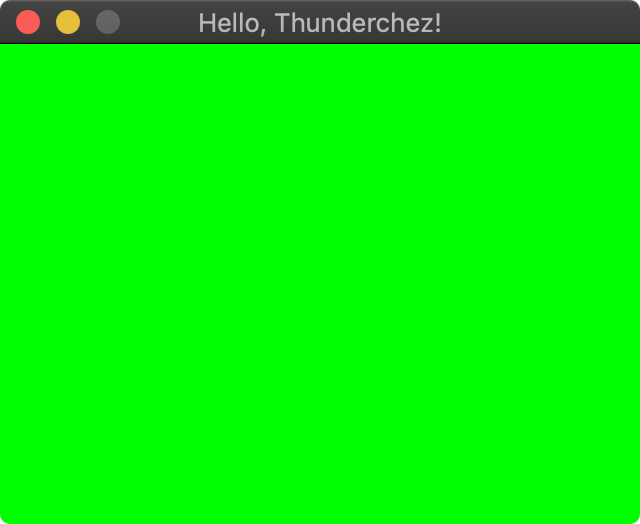 This weekend, I wanted to have dynamic access to SDL for some interactive graphing, and again ran into the problem from More Fun and Swearing with Scheme. With more experienced eyes, I read the Chez Scheme User's Guide and discovered everything I'd done wrong a year+ ago.

First, install Thunderchez somewhere, I just put it in ~/Code/CodeChezScheme

Second, install SDL2, I used port install libsdl2 and that puts it in /opt/local/lib, but in production I'll use a local dir. Read the SDL2 API for reference.

Took me a few hours to translate the basic functions I needed, and now I have:

To start it I just need:

Green window means it's working! And it can be closed with the window close button or Cmd-Q, but menu or other events don't work yet.

So… to port my graphics library from Chicken to Chez is probably a week's work, maybe less—I only fill rects, blit images, play sounds, and read a few events. My sound support on Chicken is minimal because the maintainer didn't bother to port the audio API, I had to do that myself.

Rehosting my game on Chez is an unknowably difficult debugging problem, but I code in a way that's usually portable. Large chunks of my large marklib library exist only to work around the non-portable parts and missing features of R5RS.

But the advantages are:

At the very least, if I get my graphics library ported I can do the graphing I wanted last weekend.