I used to use a DayRunner®, but then I'd fill it with cheap lined filler paper, and fill those pages with everything, and throw them in a box when I was done; I had a Palm Pilot for scheduling, but writing long notes in it was hard. Later I got into nice big Moleskines, which I rarely used because they seemed too nice for my chaos. Then stacks of Field Notes, which I keep one in my jacket, but use grudgingly. Lately I'm back to cheap 50¢ spiral notebooks and pads, and I write all the time.

I don't use a fancy pen, either. I'm currently using a "TÜL" mechanical pencil which is semi-junky (the eraser holder is loose and pushes down, so I have to tape it in place!) but fat enough for my hand, and a Field Notes clicky ballpoint which needs a 10¢ refill soon. A box of disposable ballpoints will work just as well as your $500 handcrafted engraved gold-plated fountain pen and hand-squeezed squid ink.

None of what I write on paper is important long-term, that's what Markdown files on a computer are for. Instead, every new topic or date gets written at the top of a page, sometimes just one item on that topic. And I'll go forward thru a book until it's full, then move on to the next. Anything worth keeping gets typed in eventually.

Here's a least-embarassing page from my current notepad, tracking Animal Crossing characters because paging thru Contacts in the game is so very slow. 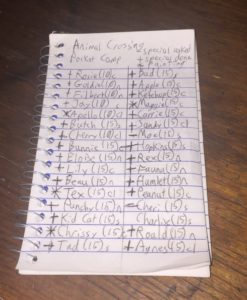 And yes, my handwriting is appalling and random-looking; no two letter forms are the same. I learned slow and perfect block lettering until I got the Palm Pilot, then Graffiti retrained me and it's been crap ever since. I learned cursive as a kid but have never used it for long writing.

One thought on “The Freedom to Write Garbage”