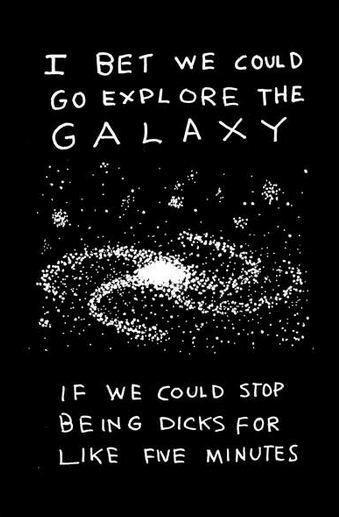 So, Wil Wheaton ( previously "I Hate Twitter" ) was just chased off the Fediverse (he still has an account on a siloed non-federating instance, which isn't really useful to anyone else). His last statement's pretty clear, so I put that down below.

"Please do your very best to be kind to each other. The world is a terrible place right now, and that's largely because it is what we make it."

I know some of the people doing the harassing. There's no point in even arguing with them: They've decided he's in Two Minutes Hate, perhaps because he has a friend whom they don't like, and won't consider "Don't be a Dick", or having empathy, tolerance, or self-awareness that some of them aren't such great friends to have, for one hot second.

While Gargron has condemned harassment, it doesn't fix the problem, since there are entire instances where 4chan-like behavior is accepted; all you can do is block accounts or those entire instances, and it still poisons the Federated timeline for a while.

I'm not sure any level of moderation fixes this shit.

This is why I highly recommend owning your own blog, and broadcasting that out to other services where people can read it; even better, read this and many other blogs in your RSS aggregator or RSS reader ( currently free! ) of choice. It's OK to put some ephemeral chat on other services, but remember those are owned by other people, and are easily attacked by angry, stupid mobs. If a stupid mob shows up here, I don't approve their comments and it's done. It's the Castle Doctrine of online posting.

It's the Admin's instance, so I fully support their choice to eliminate a source of frustration, but something to consider: a person who is doing nothing wrong can be run off one instance by a mob from another instance. That seems ... not cool. 1/x

But it's been made very, very clear to me that I am not welcome in the Fediverse, and I hear you. I hoped to find an alternative to the birdsite where I could find the same fun community that existed over there in the beginning, and it's clear to me that I won't be finding that. Before I leave, I want to just make something very clear, because I've spent most of my life being yelled at by people who don't know me at all, and I want the record to be clear. 2/x

During GamerGate, I was dogpiled and mobbed and brigaded and attacked by thousands of accounts. I started using a blocklist that was supposed to help stop that. I did not know that the blocklist I signed up for also had a lot of trans women on it. When I found out, I did everything I could to remove those women from the list I shared. When there were still innocents on the list, I stopped sharing the list entirely. Despite this, a mob has decided that I'm anti-trans. 3/x

This lie that I am anti-trans, or anti-LGBQ, is deeply hurtful to me (I know it's nothing like the pain LGBTQ people deal with every day, as they simply try to exist in a world that treats them so badly, but it is still hurtful in its own way to me). I just want to make it extremely clear: that is a lie, and the people spreading it are misinformed.

So I'm leaving the Fediverse, which has treated me with more cruelty, vitriol, hatred, and contempt than than anyone on the birdsite ever did. 4/x

I know that I'm well-off, well-known, and as a CIS white hetro dude in America, I live life on the lowest difficulty setting. I know that I have very little to complain about.

But I still have feelings, and I really do care about the world and the people in it. What I see is a lot of anger and cruelty directed at the IDEA of me, from people who I just hope don't realize that it really does hurt me, in my heart, to be accused of being someone I am not, and to be the target of a hateful mob. 5/x

Anyway, take your victory lap and collect your prizes. You've made it clear that I'm not welcome here, and even though I disagree with the action this Admin is taking (banning me when I didn't break any rules doesn't seem right), I respect and support the Admin's decision to run their instance the way they see fit.

Please do your very best to be kind to each other. The world is a terrible place right now, and that's largely because it is what we make it.

One thought on “Don't Be a Dick”