1. One article or blog entry that exemplifies the best of the Old School Renaissance for me:

Matt Finch's Swords of Jordoba youtubes, which have been hilarious and accurate to how we played/still play original games. Except the minis, which I'm not really into, but it makes for better youtubes.

2. My favorite piece of OSR wisdom/advice/snark:

I liked my simple Rules for the OSR.

There's a lot to choose from, but in no real order:

4. My favorite house rule (by someone else):

Poison damage-over-time/effect rules in Judges' Guild Ready Ref Sheets (1978). Changed the game for me when I first read them (probably early '80s?); save or die poisons are boring, DOT poisons make the players panic and start counting rounds to escape.

I'd picked up the PDF of Holmes Basic from Paizo, and went looking for house rules to better hook it into OD&D than the hacks we'd used back in the day. Rules expansions were already starting to appear, and that led to a bunch of blogs.

7. Best place to talk to other OSR gamers:

It's becoming MeWe's OSR group, but I'm not that social, I prefer to make things and release them, however infrequently.

8. Other places I might be found hanging out talking games:

I'll talk about games as @mdhughes@appdot.net on Fediverse (Mastodon).

I prefer dark fantasy and swords & sorcery, not "high fantasy". I dislike Tolkien and his works, and I'm in the process of deleting such nonsense from my games and getting back to mythological roots, and in every way that makes them better. Ban elves, non-Wagnerian dwarfs, and fobbits (portmanteau "fucking hobbits").

RoleMaster 2nd Ed or Space Master. I'm unlikely to play RM again soon, especially with "Iron Crown" (the company doing business in the name Iron Crown) taking so long on the "RoleMaster Unlimited" rewrite, which is weird since they already have RoleMaster Classic and should just support that. The fiasco of this company (or the people who bought its IP) with the best game ever made, dicking around with unplayable variants for decades, is just infuriating. Hi. I'm Mark, and I have opinions about RoleMaster.

And Stormbringer 1st Ed. Every later edition got less and less like the books of the black blade and his little albino buddy, and then Moorcock pulled the license, but Chaosium made a decent not-Elric game of it, Magic World. Then they ran out of money and Greg Stafford bought them and killed everything that wasn't Glorantha or Call of Cthulhu. And now RIP Greg Stafford, who knows what they're doing.

Simpler rules, and access to all the old dungeons and new dungeons in the style of the old ones. I've got plenty of games, almost always better ones, and written many myself, but it's the adventure support that makes OSR work for me.

But I also very much like Jeff Rients' answer:

Gygax and Arneson hit on something magical, but there's no good reason why that magical needs to be bottle and sold to us by a big corporation. There's no reason why a central committee needs to set an agenda for the hobby. As a kid new to the hobby I didn't understand how slavishly lapping up the offerings of TSR shaped my view of what D&D could be, what behaviors (good or ill) it reinforced, what doors it closed. Fantasy roleplaying is an open-ended, artistic, mythological activity between human beings. We don't need an official imprimatur to make that work, in fact such approval inevitable cuts us off from some avenues of exploration. Within the vague concept of "games like this," the OSR is a diffuse, non-centralized, network of individual exploration and group interchange, respecting the right of the individual soul to dream while keeping us connected to each other.
Also, I am not over wizards and dragons and never will be.
—Jeff Rients

12. Two other cool OSR things you should know about that I haven’t named yet:

13. If I could read but one other RPG blog but my own it would be:

Not much, too much time developing software and writing the next game (see previous) which I will run, and it will be my standard "online chat RPG" from now on. I've played a few Tunnels & Trolls solos.

16. I don't care whether you use ascending or descending AC because:

We're probably using AAC in my OSR games, but if not, you've got your to-hit-AC table on your charsheet and I've got a Referee screen/Wall of Fear & Ignorance with to-hit tables.

17. The OSRest picture I could post on short notice: 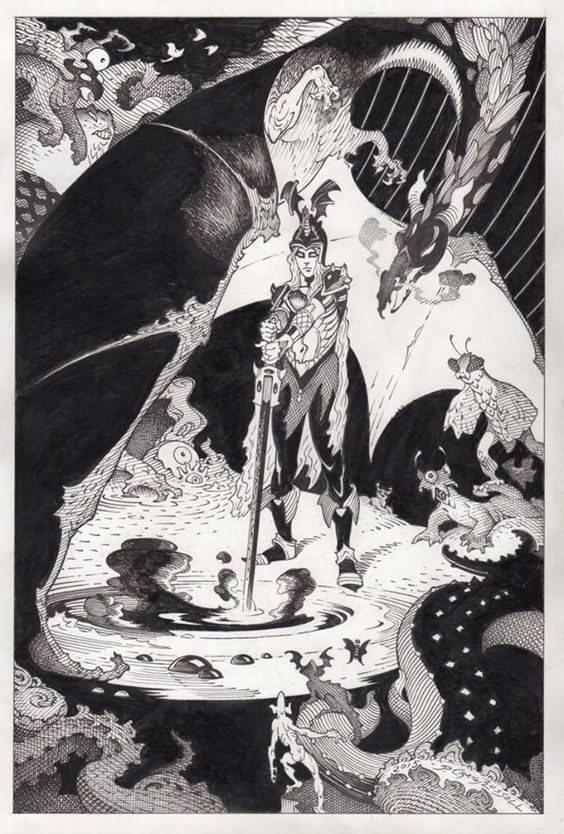