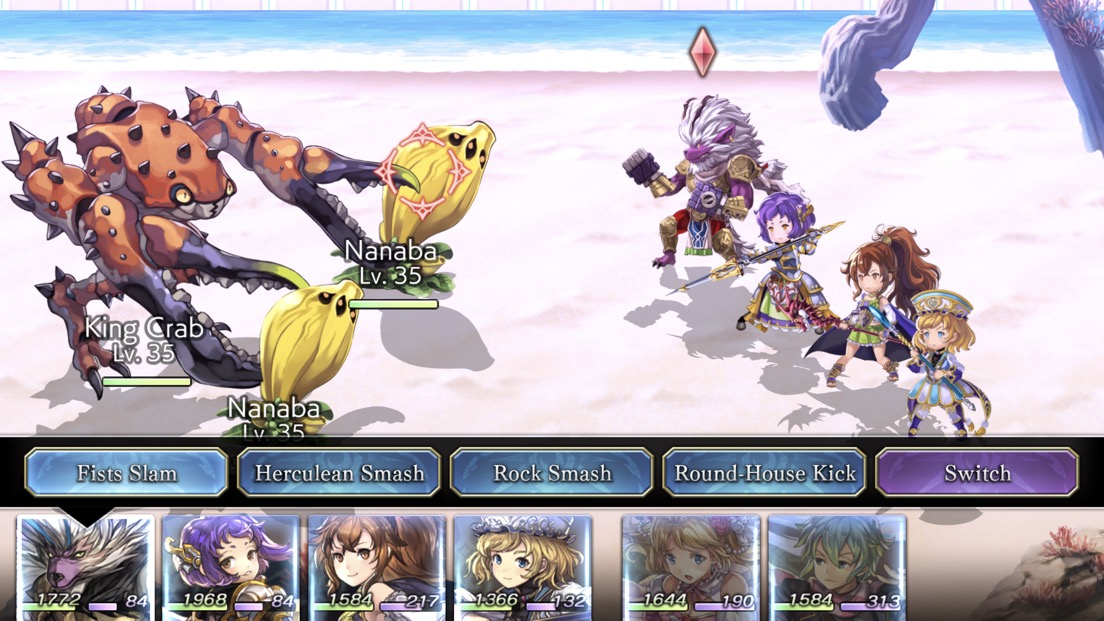 And I'll be here a while, killing crabs, bananas (third joke monster, after Plum Goblins and the spongmonkey-looking dudes at the Ogre sword fight), and blue "dragons" (barely even wyverns). The Last Island gear is 20 points better than anything else I've unlocked, it drops a ton of gold, and my gear situation was critical; the 4 pieces I've got so far are a game-changer, but I need 12! I'll probably just get 8 and I can move on, back row can suck it. The entire beach is a single short corridor with no turns, so I'm running back and forth forever. Oh kill me now.

Also, you wash up here with Aldo alone; so keep him sorta levelled up if you don't want to die a lot. I got off the beach with <100 HP and no MP, and had previously eaten my food.

When I escape this beach, I can spend more time in the industrial and spacey areas I just finished for story, and do more hard dungeons, and then back to the main story. So there's nice cool darkness at the end of this too-bright grind tunnel I'm in now.

The best part about AnotherEden as a mobage is it isn't Stamina-limited. The worst part is the battery life basically restricts you to 2 hours of game and then it's back on a charger, so you may as well have had Stamina.

There's several sidequests now where I've greatly disagreed with the linear plot, I desperately miss Elder Scrolls Online's branching quests with consequences. Just have to sit back and let the idiots fuck things up, then collect mats, then finish the quest. "How could I have known this would fuck things up?!" Creepy farmer man is creepy and I'd kill him and use his body as fertilizer in a tabletop RPG. I've commented before that morality enforced by a scoring mechanism is not ethical: This is exactly that case in point, I have to help this guy because the system says I'm rewarded for doing so and there's no choices, even though ethically it's utterly wrong.

You get better hard/very hard dungeon rewards from high light or dark ratings. But there's no way to draw plot characters from the Dream, so you can't increase their light/dark ratings the usual way. Instead, JP site says grinding these dungeons with a plot char in party sometimes adds (slight spoilers):

I did a fourth 10-pull, and completely filled my C-team with ★★★★ Lingli and Denny, both excellent hitters, and a ★★★☆ Ciel which is disappointing since there's a ★★★★ and will be upgraded to ★★★★★ this year, if global follows JP release order; that's too much book grinding to upgrade. And a couple dumb ★★★ robots, which are kinda cool; I'd like to build an all-robot party, even if everyone but Riica sucks. I have another 1000 Chronos but I'm saving them now for special event banners.