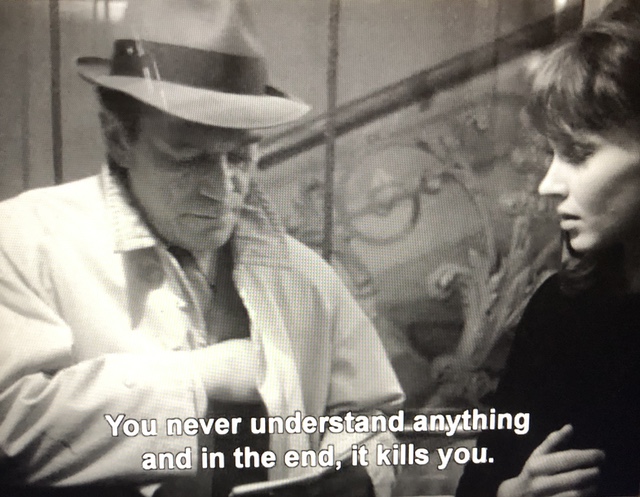 I've seen Jean-Luc Goddard's bizarre SF film every decade or two. It makes no more sense each time but a different kind of non-sense. A Rorschach test for where society is.

Lemmy Caution 003 (Eddie Constantine, reprising his role from Poison Ivy and something like 20 other spy flicks), ostensibly a reporter for Pravda, wanders a bizarre artificial city, with a short target list. Everyone he meets is a drone, but often a drone with a non-drone social role, such as the "Seductress, Level 3" (what's level 1 or 2?!), or the scientists "Heckel & Jeckel" (from the cartoon crows). Or, ultimately, Dr. Nosferatu née Von Braun; they're as subtle as supervillains ever are.

His former colleague Henri Dickson (Akim Tamirof) is a dissolute wreck, unable to adapt to life in Alphaville, but unable or unwilling to betray it or leave before it consumes him. A buck for a room, a buck for a beer, and a buck for a whore, is a good way to kill a man. The analogy that ants started as individuals, with art and creativity, and then became part of the hive and now have nothing… it's very like Frank Herbert's Hellstrom's Hive, but that relies on biology not technology. The theme's also used in Shirow Masamune's Appleseed (read the manga, but the '80s anime deals with this part exceptionally well too), where the 20% natural Humans (using the term loosely for cyborgs like Deunan and Briareous) in Olympus are maintained by 80% Bioroids who pass as Human under the city's all-controlling artificial intelligence, and still the Humans despair and kill themselves because they're birds in a cage.

The extreme conformity and social control making everyone march along to their destruction is very familiar. The execution theatres are more humane than our current model of persecuting anyone who has ever made Human mistakes; they get shot and drowned by pretty girls, while we continue persecuting them forever. One can never expiate sin in 21st C society.

The croaking voice they used as the voice of the computer Alpha 60 is awful; HAL 9000 in 1968 is more like the real future of Siri. And yet obviously you should not ever watch movies in dub, only in the original language with subtitles. The slideshow/exhibition as art of the artificial society is plausibly unbearable to watch for a normal Human, not one of the mutants/controlled people of the city.

The metaphor the city uses of distant planets and galaxies confuses many viewers, and for that matter I don't know that Goddard didn't mean it literally himself even though it's bullshit; but it makes more sense that Alphaville is what it seems, a city in some isolated wasteland, transformed by Alpha 60, and everyone has been taught they're on a distant planet, along with all the other Newspeak and programming they endure. There's no evidence of spaceships, they drive in and out of Alphaville, and it's merely set 10 years in the "future" (stated: 30 years since America & Soviets got nuclear weapons, so 1975 from the film's 1965). And of course Lemmy Caution makes no sense wandering into a science fiction world, rather than just doing his James Bond-like spy shit in a mad genius's experiment.

The city looks great as long as all you can see are dark skylines and brightly-lit office windows, but in the occasional lit street scenes it looks like a sad ex-Warsaw Pact country. Star Trek managed a few large-scale sets in 1966, even though it often cheated and just had a matte and some styrofoam rocks, not actual street scenes. The car chase later is comically bad, slow-motion and visibly just a shitty suburb with cars saved from a wrecker.

The nonsense of "love" in the film is the one thing I really can't stand. Lemmy and Natacha have no connection, barely any interaction; she might at best be infatuated with the weird stranger, and her charms are superficial. I know, the French don't necessarily need such depth to start calling it "amour", but this is a weekend fling.

My Rorschach reading for this viewing is conscienceless men using artificial intelligence to plan the destruction of Humanity and annihilation of home systems, to wit Facebook and Google (Amazon, Microsoft, and Apple being more of a Brave New World/THX-1138 style of consumerist dystopia). Sadly it is not so simple to solve as a few bullets and asking an AI some dumb riddles to blow its fuses (Alphaville, Logan's Run, and Star Trek got their computers from the same substandard maker, it seems). HAL goes crazy, but he's not defeated by anything as lame as a Sphinx.

I… IN… FIN, the ending spells. Is Alpha 60 saying "I am finished", or is it trying to spell infinity?