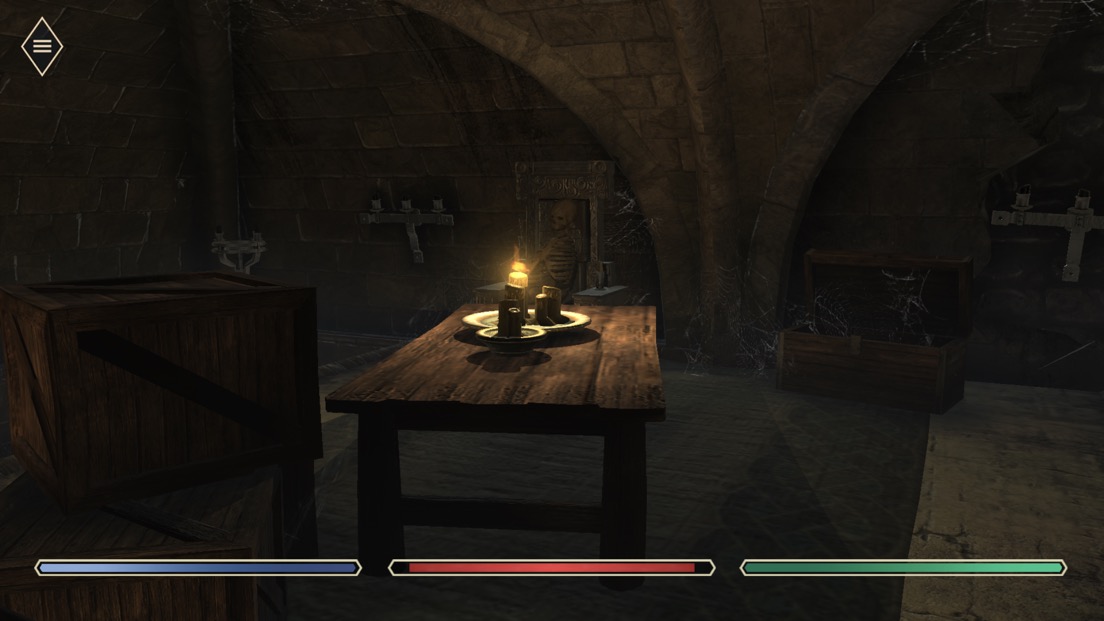 Early access just dropped, the app appeared on my phone! Starts with a fire screensaver with some intro text that immediately becomes a mini-tutorial. Log in with a Bethesda.net account, and… downloading day 0 update.

Walk down a little forest path, and there's a couple of fights, one of which, the Orc with a shield, is a little more demanding than tap tap kill, you need to learn to use a shield, which is awkward in portrait mode.

There's a big tree of skills, perks, and spells, ones at the bottom are 1 point, ones at the top are 10 points, so this may take a while!

You get a quest and go. Switching to landscape view, so I can try that instead of awkward portrait combat. Increase the look sensitivity to max, it's very sluggish by default, but follows your finger at max.

Glowing objects in each room can be looted; it's not tapping on every barrel, but there is world loot. Chests are on timers, one of the uses for gems ($$$ currency), but you can also just let them run their timers out. I'm somewhat vexed that you can't carry excess food to restore health, you have to run back to it. There's health potions, but I should be able to take some cabbages with me.

As you get materials and people in quests, you get to rebuild your town, which is a nice first-person Imperial-style town, except right now it's all ruins. The townsfolk are a little hard to click on, the ones with quest diamonds over their heads you can target that, otherwise you tap into them and it hits the ground, try again and it might work.

There's no overview map for town or dungeons, sadly. The starter dungeon is just a linear delve (but make sure you find the secret area, though it only has a low-value wood chest), but I expect they'll get more complex. Maybe have to break out graph paper for this.

I would've had a combat picture, but it didn't come out well, I'll have to figure out tapping screenshot while not being killed.