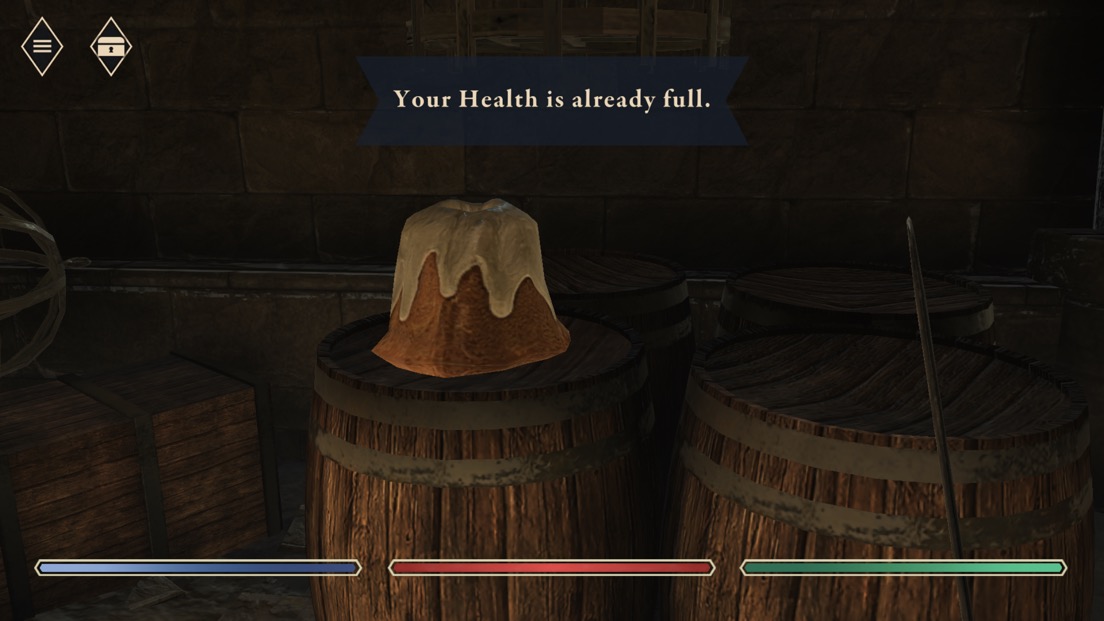 Controls kinda suck. Movement in landscape is OK, but the camera is often stuck forward, waiting for a tap to move to. I want to disable tap-to-move so I can just use a right virtual stick to control the camera. Everything in portrait is awful, tap tap tap to inch along forward because I can't see far enough ahead to hit the ground.

Combat is interesting. Tap-release with a full ring and you get a critical hit. Shield works OK for defense, until you meet heavy weapons foes who smash it down. Spells are fine, but you have to be careful to use them when you won't be interrupted. I'm using Dodging Strike to open and give me defense, then if they're slow I can cast, if not I shield up until they strike and then I cast. Fireball nukes most enemies in one shot, Lightning does not but it's faster so less likely to be interrupted, Absorb is a nice shield so I can just sword-murder heavy weapon types.

I do sometimes have a weapon-and-shield enemy who's a pain because we both shield up and wait. Even if I can Fireball, they don't die in one hit. They can't kill me, but it takes forever to kill them.

Chest opening is annoying. Wood chests at 5 seconds require tap, wait just long enough to get bored, tap open, tap skip, tap OK, takes ~15 seconds per chest with a little bit of mats and maybe a potion. Chests should automatically open & skip to contents if you're on the chest screen. Silver chests at 3 hours are far too long for the contents, which aren't that much better than Wood. Gold at 6 hours are 1 per night, plus maybe 1 more during a workday. I'm backed up to 1 Gold, 10 Silver; I increased my chest inventory to 30 but the next +10 costs 80 gems which I'm not willing to do yet.

Daily grind seems OK, do all the 1-2 skull quests/job boards, then do something hard if you can: I did one 3 skull that went fine, then another full of berserkers and wights just demolished me, I died and revived with a scroll, and soon died again! Had to abandon that job. Quests are story, they don't go away, jobs are temporary and refill daily, I haven't run out of things to do before filling up my chest inventory.

Once a quest completes, I always hit Explore and finish the delve, but then I have to hit menu, Quest Details, Complete. It should be a top-of-screen button when available, and I'd like to set it to always Explore, never auto-complete.

Mapping is going to be a real problem. Some of the delves have 2-3 branches, and my left-hand-path rule makes them navigable, but it's hard to be sure I've got every corner. No compass, no automap, just Clairvoyance lighting the "happy path" but that misses so much stuff.

I'm finally getting some delves that aren't just Imperial prisons, but natural tunnels and Ayleid ruins. The standard rooms are very repetitive, I sure hope they increase the variety soon. The intro adventure outside was nice, but I haven't seen a wilderness since.

Abyss is the endless dungeon, but at least the first 10 floors are literally a linear path with one or two rooms, and then a stair down to the next floor. Treasure is accumulated for how far you go, there's no treasure on the floor, and no food to eat. On floor 10 I just got murdered by the skeletons, there's a steep power curve there.

Arena just unlocked after I rescued some more villagers, but it isn't open yet.

Town building is very slow. I made the town hall, forge, a house, and a dwelling (different styles), each takes 2-3 hours, but I need to grind a ton of limestone and copper to make the alchemist. I did get a job which rewarded 10 limestone, so it's possible to get there. But I can't go inside any buildings, and there's still smoke rising from the walls.

A little while later, I have an alchemist, though all I've made yet are resist poison potions, which have been nice on spider delves, and I'm 2 resources short of upgrading the forge to level 2, which will hopefully let me craft & improve steel gear, my current gear isn't good enough for higher-level content.