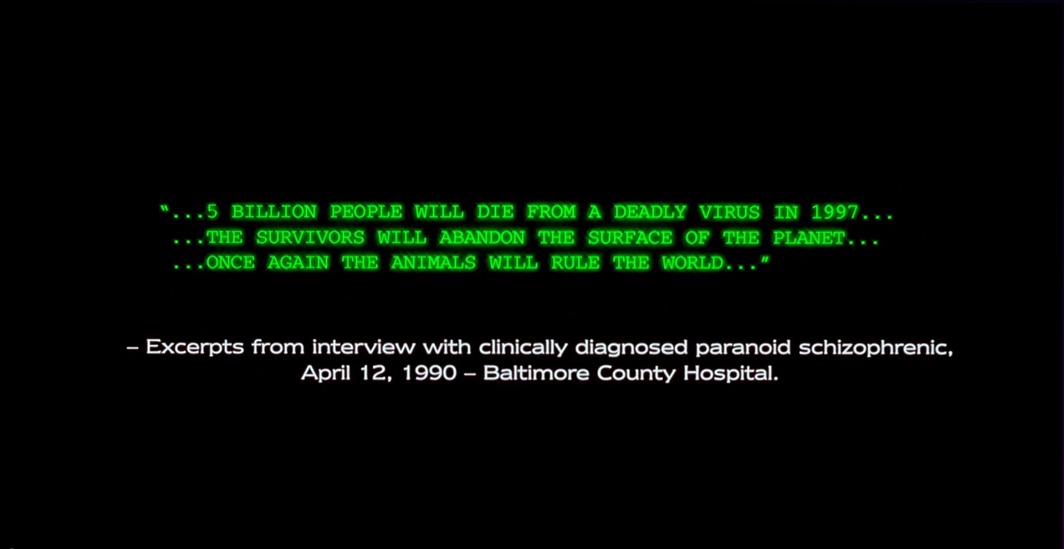 Haven't seen this since the theatre when it came out.

So, 1995. Bruce Willis was familiar from Moonlighting, and Die Hard, and his mediocre blues album The Return of Bruno, but hadn't become quite the caricature and one-note joke he is now. Brad Pitt had just come off True Romance and Se7en, whining and crying "What's in the box? What's in the box?!" Madeleine Stowe was the A-list femme fatale from China Moon, Revenge, and The Two Jakes. Plenty of smaller familiar actors, like Chris Meloni (most punchable face in the world) as the asshole cop, years before Law & Order: Formulaic Rape Is Bad Unit.

This film's a massively extended (too much so) Hollywoodization of the French experimental… it's not quite a movie, except in the way Ken Burns' documentaries are… sequence of moving pictures, La Jetée. Which in some ways is very effective, but it's dry as hell, lacks any characterization, it's an idea without implementation. Hollywooding it up was inevitable.

The style of the future, the police station, the mental institution, the shitty New York corner they keep going back to, just every set except the outdoors and the mansion, are basically Terry Gilliam going crazy with his brutalism and industrial post-war England anti-aesthetic. Visually impressive sometimes, but good grief, Terry, not everyplace looks like the concrete cell you were apparently raised and beaten in. The man needs a psychiatrist, not a director of photography.

The closed time loop of James Cole's life is pretty obvious from the first flashback, if you have any science fiction background; I'd well forgotten the details, and immediately realized it. The people of the future can't find anyone honest and sane who's tough enough to survive time travel, so they send a stir-crazy prisoner; but everyone seems to be a prisoner or a guard, there's no indication of normal life in the future. Cole's inability to calm down, act normal, like he remembers people being from childhood, is what causes all of his own problems.

The Army of the 12 Monkeys are well-cast, I've known a few people in extreme environmental causes and they're… not well-adjusted. When you're "the only people who know the truth!!!", you can either work sanely to raise awareness; or wait for it to be a giant mess so finally people act at the last minute, which is what normally happens, see global warming; or scream like a maniac and discredit everything you stand for, which is how these groups usually work. Pitt's a convincing lunatic, he's always had that twitchy look and when he gets screaming & whining & making weird hand gestures, nobody can stop him. Is there a film where Pitt doesn't flip out?

There's a nice tight 60-90 minute story trapped in a flabby, repetitive 2 hours 10 minutes of film. There's no reason for the second or third trips back, or the side-jaunt to the more distant past. A tighter version: Cole goes back, gets nabbed, stays in the asylum a few years, escapes, goes on a road trip with the shrink, the finale happens. Nobody else from the future ever needs to show up, the shrink picks up the last clue in the airport.

I so want this to be better than it is. The premise is great. It's better to watch than La Jetée. Madeleine Stowe is very nice. But I had to take a few breaks and got out my phone during the long repeat acts. The slo-mo death scene with swelling music at the end should've been cut, it shits on the tone of the rest of it.