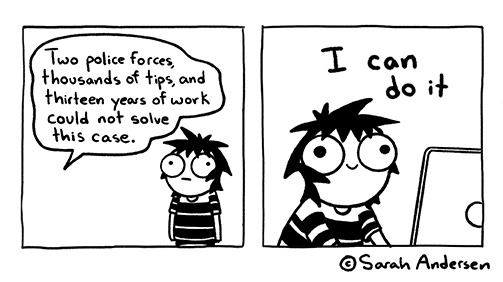 Michelle McNamara, Patton Oswalt's late wife, was a crime podcaster/writer. The one she wrote about was the East Area Rapist/Original Night Stalker (rather overly functionally named: EAR/ONS). Much of this is framed in interviews with Patton in the few years since her death (prescription drug overdose), and it's certainly awkward watching him, not doing standup so I don't know what to expect from him, and he's obviously hurt, but he doesn't have a huge emotional range.

The show is all flashbacks, old footage, people reminiscing, and a few dreamlike, abstract reenactments—about a writer who only read books and endless forum posts, and interviewed people who had done the actual investigation, and thought she was contributing something to the cold case. "This is what I was born to do!", she says.

In Isaac Asimov's Foundation, Lord Dorwin is "awfully fascinated" by history, and the origin question (what planet Humans originated on, long lost and forgotten); but he does no field research, he just reads other peoples' books and papers and writes his own third-hand papers. That's also the trend in E.M. Forster's The Machine Stops, where original research and going outside is abandoned, people just make video talks (Youtube, but written in 1909!) about other video talks. I bring these up, because these dystopian distant-future visions of totally derivative non-research have already come true, and this is a show about it.

Michelle (and the voice actor reading her text) is incredibly preachy and pretentious; she was one of those writers who thinks a 5-dollar-word is better than a short one, that poetry in the middle of her exposition about a rape and murder makes it pithier. An editor would've told her to dial it back, but she was almost entirely self-published and unedited. The scope of her book, and idea of getting it done on deadline, was just implausible, solving a cold case as her first investigation, writing her first book. Even if you didn't see the news, her manner of death is unsurprising.

"Michelle was such a brilliant woman, she was such a talented writer, she was so into everything that we're all into, and she made such great contents. It's just an incomprehensible tragedy."
—Karen Kilgariff, "My Favorite Murder Podcast"

"Such great contents". Fuck. Let nobody be buried with that as an epitaph, OK?

Because EAR/ONS used wooded creeks as a "highway" between stalking sites, there's a repeat theme and little snippets of The Creature from the Black Lagoon. But this is weird, bordering on offensive; it's portraying the Creature as the rapist, Julie Adams as the victims. But in the actual movies the creature fights only in self-defense, he has no woman of his own kind and never hurts the girl, but he's hunted by a murderous, reactionary white lynch mob and murdered in his home; I'm always heartbroken by the ending. I haven't yet seen Guillermo del Toro's The Shape of Water, but I understand it's in line with that. Surely they're not suggesting EAR/ONS is a tragic victim.

E1 almost completely lost me, I wasn't going to keep going, but I gave further eps a chance, and it does get better, but still spends entirely too long on Michelle's personal life and death, and it's all intermingled.

You get a segment on EAR/ONS in rather grim detail. A segment on research and interviews with the surviving victims. A segment on Michelle playing with her daughter. Shove in a blender with barely a screen blank for transition. That's appalling storytelling.

The case is, however, not solved by Michelle's book, or any of the paperwork, but by DNA evidence & geneology (many people are stupid enough to upload their DNA to random company websites!) years after Michelle's death, by detectives also working on the case. Almost nothing about the actual killer, his plea bargains and the additional murders he confessed to, is covered at all.

Real life's not neat and tidy like a good crime drama, but this biopic/true crime mix is an absolute mess, gives you whiplash going from subject to subject.