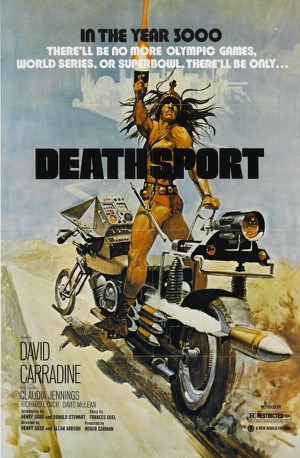 It immediately starts with some funky electronic music (the whole soundtrack is excellent if you like beepy '70s electronic music), and the best voiceover ever, the setting of every science-fantasy RPG setting I've ever run:

A thousand years from tomorrow, after the Great Neutron Wars,
the world consists of desert wastes and isolated city states.
A few machines remain as a reminder of the past,
but only the city-dwelling Statemen use them.
Between the cities roam the dreaded cannibal mutants
and the Range Guides. Guides are legendary warriors
leading an independent nomadic life,
owing allegiance only to their code.

Carradine and another range guide chick (an extremely drunk/coked up Claudia Jennings a year before her death) have a few battles against silver lamé-clad Statemen, riding "death machines" which are dirtbikes with some plastic plates glued on. I'm quite enamored of the clear plastic swords and light-up tube "blasters", not even a pretense of any gear being usable.

There's a child abducted by the mutants, who becomes a later sidequest. Or mutant lunch.

Eventually they're captured and spend entirely too long in bad prison cells, making small talk through a teeny grill. Some light torture, girls forced to dance naked under swinging blinky-light cables, nothing too interesting. The Statemen leader (David McLean, his last role while he was dying from lung cancer) wears black and is going insane, his sidekick (Richard Lynch, the only competent actor besides Carradine) wears black and is a traitor Guide, very very obviously some Star Wars influences.

Finally the big event, they're thrown into an arena (a dirtbike rally pit) against the Statemen. Mostly terrible teenage bike riders, but a few good explosive and pyro effects set off more or less at random. They blow up the force field walls to roam the wastes, hunted by the sidekick and a nigh-endless supply of goons.

A little bit of a "dungeon" crawl with torches, marching order, rats, some boinking in a cell. A lot of dirtbike fights, with these savage guides knowing exactly how to use the "death machines" better than trained Statemen soldiers. A second dungeon crawl in a "cave" with mutants. A third on-bike dungeon crawl/DOOM level with explosive barrels. They know what I like to see: Tits and explosions.

I'm somewhat impressed by the bike-front camera shooting. Trivial with a GoPro™ today, but in 1978, strapping a film camera to a dirtbike and getting any usable footage is amazing. Had to be some kind of stabilized rig?

The truth needs no introduction.
When the Sun rises, there's no necessity to announce it.
Clearly we have lost.
—sidekick contradicting his own thesis.

At least one of the writers must have played D&D or Metamorphosis Alpha, there's too many obvious gaming bits. The writing is all over the place, parts are somewhat clever and deep, there's what looks like some real setting lore, the rest is mashed together clichés and other movies; there were 4 writers, and probably Roger Corman fiddled with it, too. Carradine got in fistfights with the director, and another director had to finish it. Everyone was on drugs.

Dumb, only half-competent, but far more amusing than I expected.