At best you get tears & corrosive salt water, at worst you get a sodium explosion.

My philosophy of games:

So, I just dropped a lot of words there with fuzzy definitions:

An unfortunate result of focusing on Story has been forcing the player to make bad dialogue/action choices to advance, stay on the railroad unable to get out and wander away. Heavy Rain's no-choice "Press X to Cry Jason" rather than man up and go look for your lost child.

The now-defunct Telltale Games' Minecraft Story Mode had a painfully fixed main character and plot, and a doomed character, but let you choose social consequences with allies… which were then forgotten in the next chapter.

Early Final Fantasy games had a totally blank slate. FF3 is right on the cusp; it gives you a sandbox to explore, eventually hit a switch to open the next, bigger sandbox, repeat a couple more times, finally a long multi-part endgame and post-game sidequests. The characters have a secret backstory, but you can rename them, give them any job you want, play them however you want. I did one playthrough with boring Warrior, Thief, White Mage, Black Mage, another using Monk/Black Belt, Red Mage/Dragoon, Scholar/Geomancer, Evoker/Summoner. Utterly different gameplay even if I ended up clearing the same dungeons. My bizarro party got to level 99 to fight the giants.

By FF4, the characters and story are locked in place, you can enjoy it or not, and certainly the art's great and I quote "you spoony bard!" all the time, but you have no choices. Not that I'm blaming that all on JRPGs — there's Japanese games with freedom of choice, and Western games fixed on one character, Gabriel Knight is one of the earliest of this archetype.

Gamebooks like Tunnels & Trolls solos, Fighting Fantasy, Lone Wolf, etc. are odd hybrids since they have story, but almost never have a defined character (a few do, like Creature of Chaos). The more linear the gamebook is, the better the story is, but the less interesting it is to play; there's several I've done that had one win and many deaths, and so cannot be replayed. The more meaningful choices they offer, the more incoherent the gamebook becomes, just a bunch of random scenes because you can't build up any meaning like linear fiction does.

My objection to Dungeons & Dragons adventures from Dragonlance (1984) on, is that it went from a game of freeform dungeon crawls, hex crawls, or "West Marches", wandering the Referee's world, maybe loosely using a Greyhawk map or Outdoor Survival, often made up in the days between games or improvised on the spot; to railroaded "adventure paths" with fixed character roles (either named and unkillable like DL or just "must have fighter, thief, cleric, magic-user, bard, or you will fail"). 5E has become entirely that, their healing/action economy even requires a specific pacing along the railroad, and their world maps are just one-path flowcharts you move along like Candyland.

So in conclusion (almost), just say no to story in your games. Look for that infinite high of gameplay.

It's worth looking at Chris's development woes. Sequentiality and list of encounters in Le Morte d'Arthur he gave up on gameplay, it's a railroad click-thru of Mallory's book, with a single fame/piety score to get win/lose.

His Gamers or Storytellers seems to be an admission of defeat. Yet he still has bigoted, ignorant ideas like:

This is why he fails. Games can have artistic content, just not inbred Hollywood-imitating content. There is plenty of poetry in comic books, obviously Sandman but many an issue of Detective Comics (the smarter Batman series) has moved me deeply. Many art-house movies are cartoons, or vice versa, or were when theatres were a thing, I'd start with Don Hertzfeldt's Rejected and Ralph Bakshi's Wizards. You can't sell poison apples to gamers, not more than once anyway.

I had a look at his soi-disant "Wumpus", and got this, his "non-technical" user interface. It's incredible to me that this is the guy who made Eastern Front and Balance of Power, which were techy but not a giant wall of UI clickies, badly sized in a window. Yes, it's Java, but you can make attractive and usable Java UI, it just requires effort. 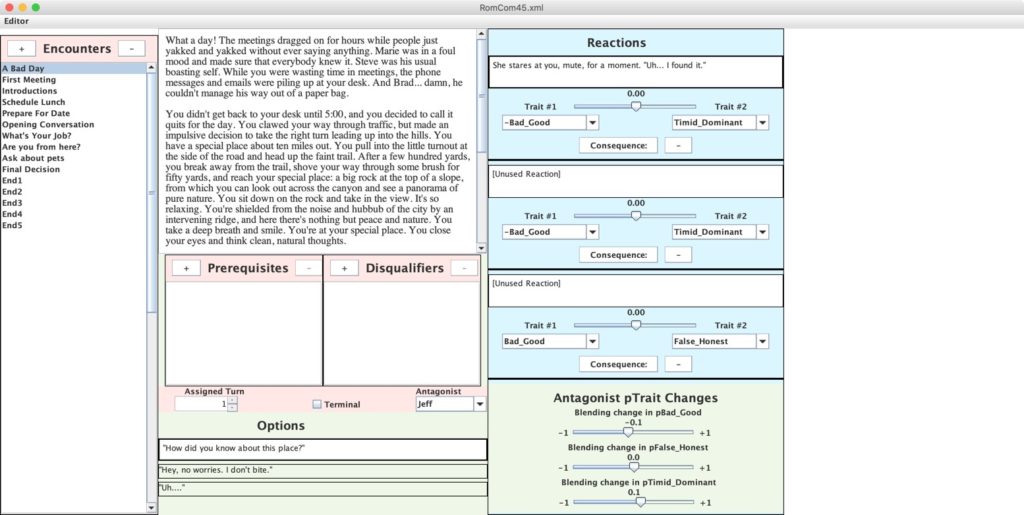 I figured out eventually that you can hit Editor/Run Rehearsal (?) to play in something like a dialog box UI, was able to play through a very dull conversation, and then it gets stuck with Jeff explaining widgets to Sam in an infinite loop. Excellent. Obviously story-gaming is a solved problem. 🙄