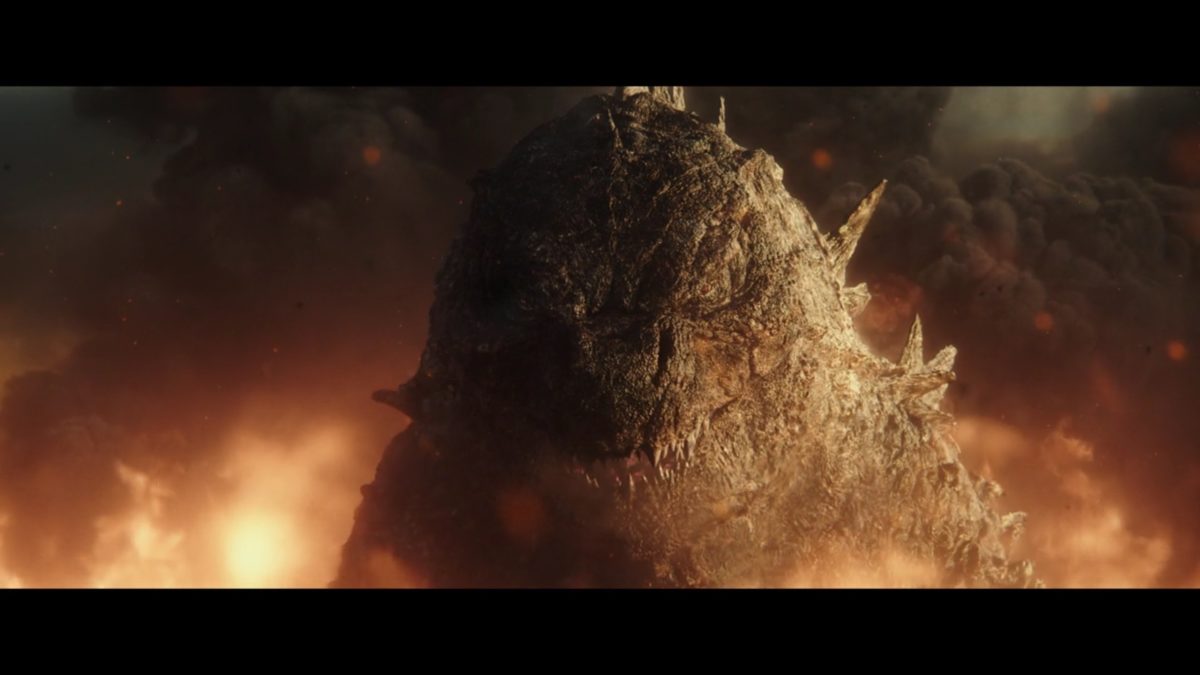 Focuses much more on King Kong than King of the Monsters. I don't, I guess, object to that, but I'm a Gojira fan, not a "giant monkey whose story gets rebooted every 30 years like Spider-Man" fan.

I'll try to keep this general, but I can't talk about a few things without SPOILERS.

Bernie (Brian Tyree Henry) the Titan Truth podcaster is great, one of nature's true kooks like Dan Aykroyd, but in a world full of monsters he should be a multi-billionaire star, not sneaking around alone. "Tap or no tap?" is my new introductory question. Just adorable. For once, the best character in a kaiju movie is a person.

The woman scientist, the child, the asshole & daughter from the last movie, are all annoying and should go. New scientist (Alexander Skarsgård) is fine, but so dull I forget who he is most scenes. Creepy Hans Gruber looking Apex exec and yet another damned Dr Serizawa, they can stay. And the Apex woman (Eiza González Reyna) is pretty, snarky, but suspicious, she'll make a fine sequel villainess.

They've outdone themselves with the child this time. She's "native", deaf, and carries around a shitty handmade Kong doll. "Aww", says any moron with no brain, only a limbic system. But she's snide in sign language, always underfoot and distracting people with work to do. There's no way she should be on an adult mission. Everything you hate about children in kaiju movies wrapped up in one. And you know they won't kill her as she deserved from scene one. Ugh. Every time I see the brat I mutter "GET THE CHILD OFF THE SCREEN".

Kong's soft and cuddly and domesticated, very much a giant gorilla suit with a slightly pudgy wrestler inside. Ludicrously they transport him at one point with choppers. Kong doesn't like choppers much, but here he's placid as a sleepy puppy, instead of screaming and throwing things at them. He does eventually toughen up.

Gojira looks great in this. The Legendary CGI will never be as alive as the Toho suits, but his face is super expressive and yet alien, non-mammalian. He swims well, and looks most natural there. He looks like a dinosaur's god. The sparklers on his spine and his fire breath have been made too white and clean, they're more nasty nuclear fire in older ones where it's just painted onto the film cels.

The hollow world is gorgeous. Maybe too small? It's a cavern layer around the core of the Earth, or something, it's not entirely clear how it relates to reality. They could easily have spent another 30 minutes here and made something great of it. Maybe next movie.

With the Ancient/Titan artifacts and place… are the Titans descendants of the Ancients? Everything's on their scale, he acts like he's come home. But Kong picking up a tool is a long way from him being descended from giant people.

The main fight is good, bouncing around a neon-lit Hong Kong, a cheaty weapon gives Kong an even chance he shouldn't have. It's much more physical of a fight than some others in the series.

The final act is really unnecessary, should've been saved as a teaser for the next film. Or maybe they'll just make a much better one next time.