I considered the iPhone X, but after doing some maintenance on my apps, I loathe coding around the notch, and I loathe the way it looks. Chris Pirillo had some thoughts and followup that echo mine. Chris has since gone to Android, which to me is like eating only Soylent Green because you once got an undercooked meatloaf; overreaction isn't always wrong, though.

I would prefer the SE form factor, but I don't like a years-old hardware platform. And if this is going to be my only iOS device, I should get the biggest one possible so I can use it as a phablet. It's not like I ever hold a phone up to my ear anyway, it's either on speaker or headphones (dual speakers in the iPhone 8+! But USB-C headphone dongles ?).

The device arrives, and I go to set up, and immediately hit a roadblock: I can't access my iTunes backups. I've used them to recover before, but now I have no idea what the password is, and it's not any of my previous device passwords. Well, now I'm boned. Had to upgrade iCloud and backup to iCloud, which doesn't preserve on-device logins or the actual apps. Many hours later (slow asymmetric bandwidth), it's done.

Restoring the phone from that backup wasn't bad, but now I have a blank phone with placeholders for every single app, which I have to tap on, wait for it to spin and decide "keep/delete" if it's not 64-bit, or paradoxically tell me to buy the app if the app is no longer for sale. And then for every app, go in and restore purchases if it has any, login if necessary, etc. I didn't set Downcast to archive all podcasts, so it had to sit there for hours downloading the last 2 eps of dozens of podcasts.

At this point, let me say: Going 64-bit only is the most user-hostile, art-destroying thing Apple has ever done, and it SUCKS. All of Llamasoft's and CAVE's games are gone from the App Store, and were 32-bit. So I can still play them on old dying devices, but that's it. I miss Gridrunner and Deathsmiles. Atari Greatest Hits is still updated, and works perfectly; Activision Anthology is not, so no Pitfall! Midway Arcade is gone. Lost Treasures of Infocom is lost.

Apple's actually fucked up in 3 ways here, by not supporting 32-bit with an optional API download, by not providing legacy download of apps, and by making the App Store a toxic race for the bottom by EA and other literal motherfucking mega-studios, so no independent developer can make money except the 1 in a billion jackpots. I'm not advocating leaving for Google Play, because that's even less profitable, it's just open theft. I'm advocating burning down the entire system and starting over. But for now I'll take my Big Brother-issued gruel and pretend to enjoy it.

That was most of day 1 before I could do anything with the phone at all.

iBooks is a special level of Hell. It's the shittiest-written app Apple's ever released, syncing barely works at all, downloading is flaky and eats the main UI thread. So I'd go Purchased > Books > Not on this iPhone > All Books, which actually shows maybe 20 books and then stops listing them, then click the download arrow for the 5-6 items visible, then the UI would lock up and I'd have to wait for 5-15 minutes for it to finish. Then once I had all my books, they weren't organized correctly anymore, which is I guess my fault for having slightly different setups on iPhone, iPad, and Mac. So I went full-on librarian. Protip: Disable 3D touch in Settings, because the 3D touch in iBooks is useless and makes it impossible to move books. I spent a good 15 minutes struggling with this before I learned. So here goes most of day 2. 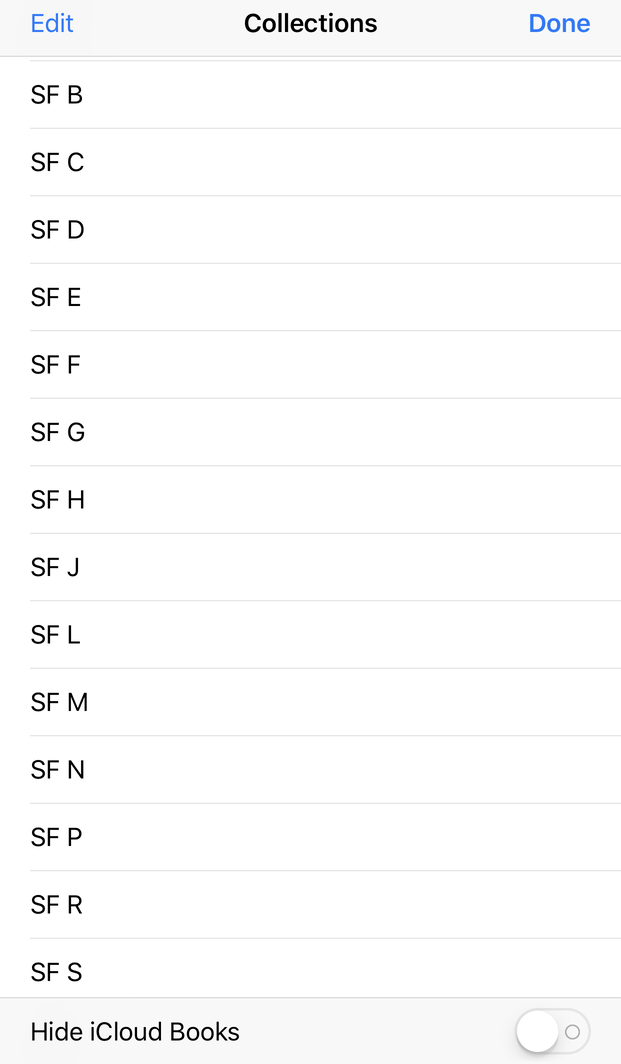 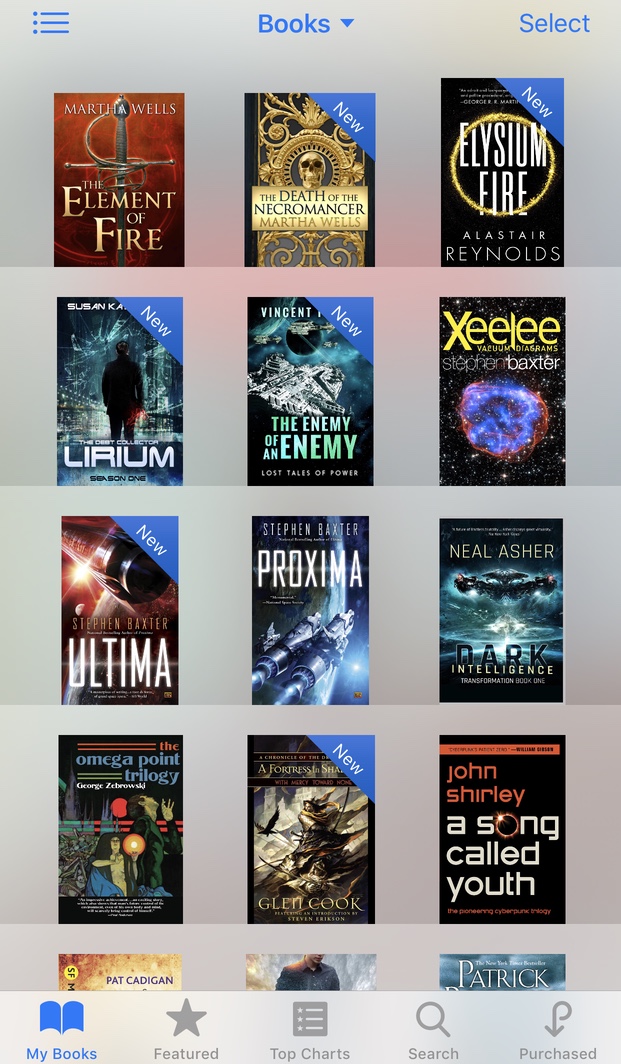 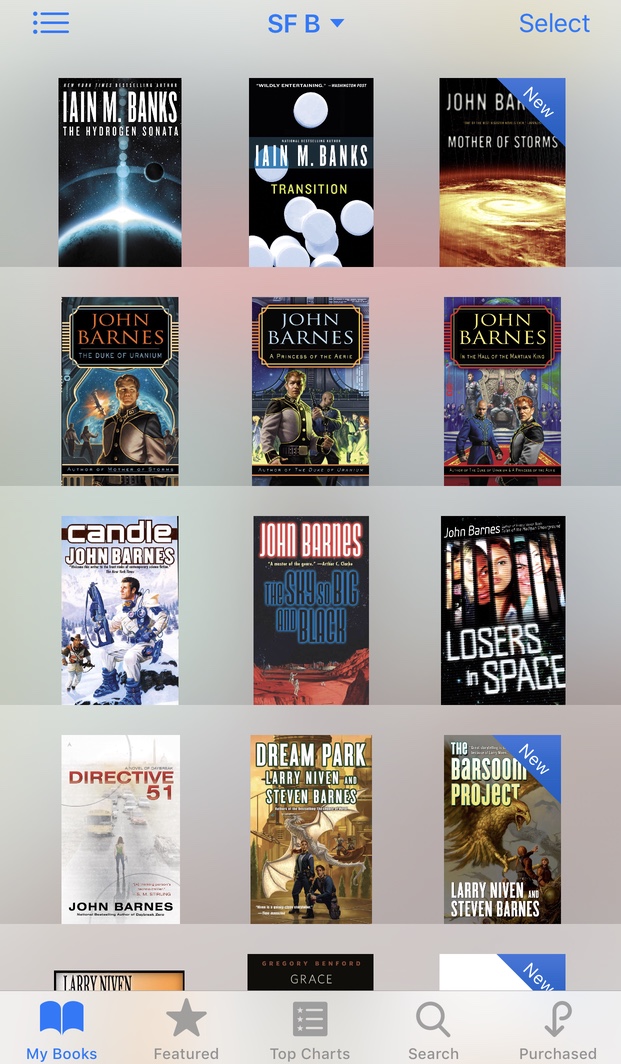 Taking those screenshots reveals a new screenshot UI, which PISSES ME OFF: iPhone demands that I triage or edit every screenshot immediately, sitting in the corner of the screen like a Jony Ive dog turd. I don't see any way to turn this bullshit feature off.

Additional stress comes from my entertainments: The ESO Jester's Festival was all weekend, which I grind for items worth a lot of gold, but had to spend most of a day tapping thru my phone and then looking back to the game.

And at the same time, Animal Crossing: Pocket Camp has two events running, a Mario anniversary crafting thing, and a gardening event. Happily I can still clear these in bed, in the bathroom, or while out, but having my phone be busy downloading books interferes with that.

I know, "do something useful, Mark", but really, games are supposed to be what recharge me, not extra stress.

I still haven't loaded my music onto the phone. I have enough space now for a good portion of my music library, instead of only the highest-rated curated lists. Yes, I still have a music library, so when I'm away from wifi, I can listen to music without burning thru my data cap. Ha ha suck it streaming-only kiddies. But I could also just take my iPod classic out, which has everything, but Apple doesn't want you to have nice things like that anymore.

As for the hardware:

The screen's nice, bright, and rectangular. No fucking around with maybe-unusable areas at the bottom and top, just a big canvas for software to draw on. I can see the time, battery, AND phone signal at once. I can't really use it one-handed all the time. If I cradle it at the base of my fingers in my left hand, I can barely reach the other side of the screen with my thumb. I treat it more like the iPad already, set it down on a table or my leg and work on it.

The glossy case is irresponsible vanity. It should have a matte, grippable back, not be a perfectly-smooth, sliding-onto-concrete frictionless surface. FUCK Jony Ive and his obsession with things that look like nothing, and suck to actually use. I guess I need to find a new sticker-backing or very thin case for this. I don't want to add bulk.

Home button has a VERY satisfying haptic click, it really feels like the entire front of the device is pivoting down about 1mm, even tho it's solid glass. I do use TouchID when I'm somewhere safe, tho I'd disable that if I was travelling; I don't want the pigs to force me to unlock my device.

I haven't done any real photography with this phone yet, but the giant 2-camera hunchback is supposed to be quite nice.

Current setup, which will probably change again soon. Elric covers were just convenient, but the text under the icons doesn't look good, so I have to change that soon. You know what I want? Custom wallpaper per desktop, like we have on Mac OS X. 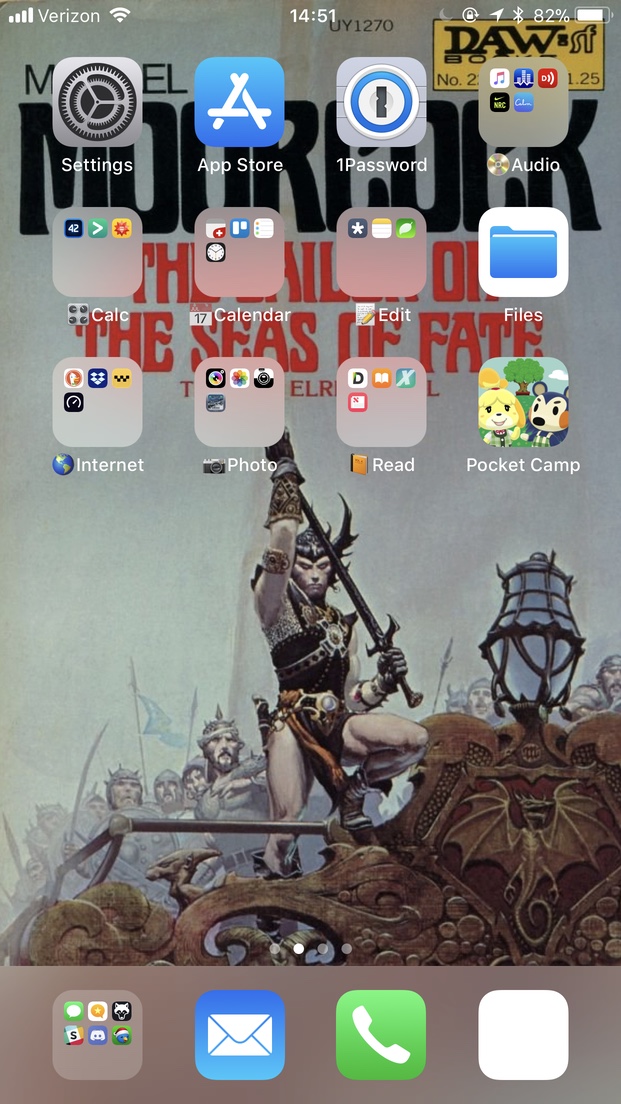 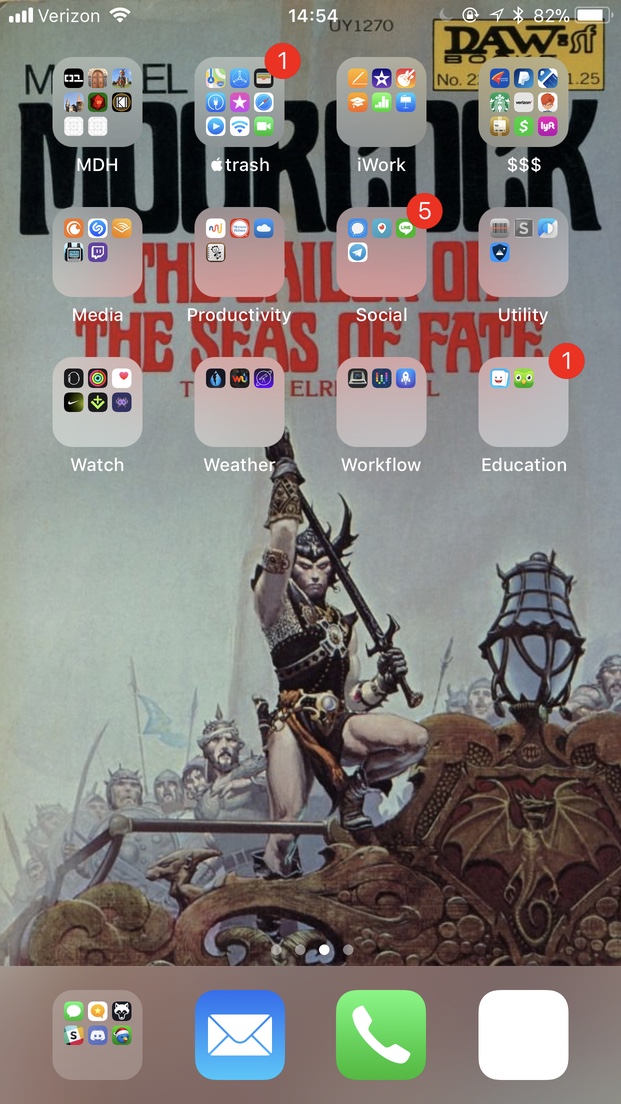 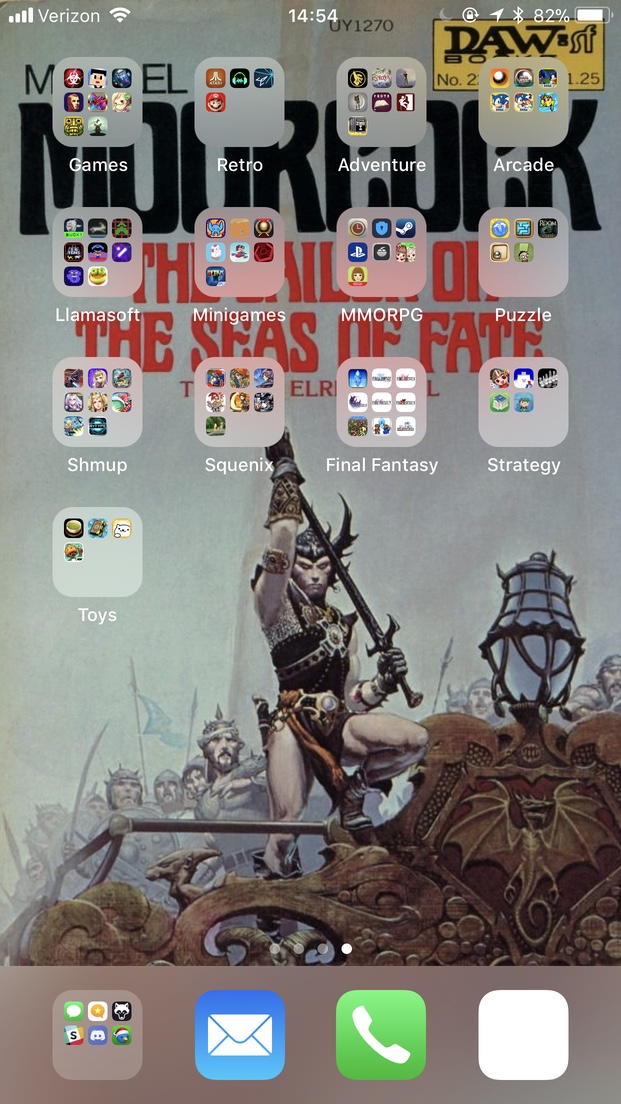