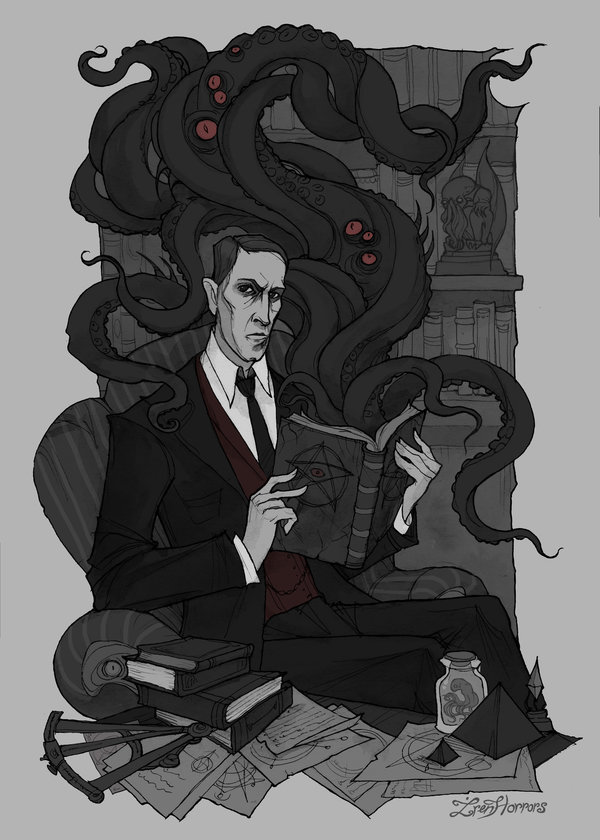 Below, one of my favorites to curl up and enjoy; "The Book" fragment elaborates on the first few sections, but the poetic rewrite is more effective:

Fungi from Yuggoth, by H.P. Lovecraft:

The place was dark and dusty and half-lost
In tangles of old alleys near the quays,
Reeking of strange things brought in from the seas,
And with queer curls of fog that west winds tossed.
Small lozenge panes, obscured by smoke and frost,
Just shewed the books, in piles like twisted trees,
Rotting from floor to roof—congeries
Of crumbling elder lore at little cost.

I entered, charmed, and from a cobwebbed heap
Took up the nearest tome and thumbed it through,
Trembling at curious words that seemed to keep
Some secret, monstrous if one only knew.
Then, looking for some seller old in craft,
I could find nothing but a voice that laughed.

I held the book beneath my coat, at pains
To hide the thing from sight in such a place;
Hurrying through the ancient harbor lanes
With often-turning head and nervous pace.
Dull, furtive windows in old tottering brick
Peered at me oddly as I hastened by,
And thinking what they sheltered, I grew sick
For a redeeming glimpse of clean blue sky.

No one had seen me take the thing—but still
A blank laugh echoed in my whirling head,
And I could guess what nighted worlds of ill
Lurked in that volume I had coveted.
The way grew strange—the walls alike and madding—
And far behind me, unseen feet were padding.

I do not know what windings in the waste
Of those strange sea-lanes brought me home once more,
But on my porch I trembled, white with haste
To get inside and bolt the heavy door.
I had the book that told the hidden way
Across the void and through the space-hung screens
That hold the undimensioned worlds at bay,
And keep lost aeons to their own demesnes.

At last the key was mine to those vague visions
Of sunset spires and twilight woods that brood
Dim in the gulfs beyond this earth’s precisions,
Lurking as memories of infinitude.
The key was mine, but as I sat there mumbling,
The attic window shook with a faint fumbling.

The day had come again, when as a child
I saw—just once—that hollow of old oaks,
Grey with a ground-mist that enfolds and chokes
The slinking shapes which madness has defiled.
It was the same—an herbage rank and wild
Clings round an altar whose carved sign invokes
That Nameless One to whom a thousand smokes
Rose, aeons gone, from unclean towers up-piled.

I saw the body spread on that dank stone,
And knew those things which feasted were not men;
I knew this strange, grey world was not my own,
But Yuggoth, past the starry voids—and then
The body shrieked at me with a dead cry,
And all too late I knew that it was I!