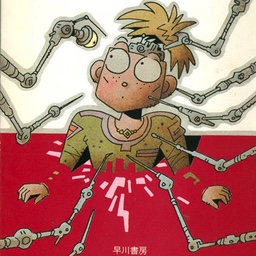 I must've read Software on release in 1982 or in the next year; heavy stuff for a 12- or 13-year-old little mutant Mark. I've reread it a number of times since, and got more out of it each time. This time, it's notable how short and fast it is for so much information.

I guess I should mention, since some people are neurotic about this, there's a lot of sex, drugs, nudity, more sex, really weird drugs, cannibalism, and bodily functions. Also a lot of violence, but the people who are most neurotic about harmless, consensual sex or drugs seem to think murdering people is fine, respectable behavior. This is why you Humans freak me out and repulse me.

Software (1982): Cobb Anderson goes from crusty old drunk to immediately going along with ("waving") the Boppers' (AI robots he created and then freed from Asimovian slavery) plan to immortalize some Humans by the messiest process possible. Sta-Hi Mooney's given very short shrift here, much of what I remember of him actually comes from the next book.

The Bopper architecture and programming are discussed in depth, and the Little Boppers' war on the Big Boppers (centralization instead of anarchy) is surprisingly, pointedly relevant to current reality for a 36-year-old book. Since the book is set in 2020, and Cobb made the Boppers for Lunar mining, uh, we're WAY fucking behind on space and robotics in our shitty timeline.

The religion Personetics is super obvious as a scam, and yet Humans really fall for Dianetics (in my OMNI rereads, Dianetics is advertising every issue with this faux-serious tone), or for that matter any religion, which are all just scams to take your money and control you. And then everything goes sideways, lack of backup systems and over-controlling middle management ruin everything. Fin.
★★★★★

Wetware (1988): I read this just going into college to fuck my brain up. Probably haven't read the whole thing since then, skimmed it in parts. The first half following Sta-Hi, er, "Stahn" Mooney and a number of boppers in a city stolen from the boppers on the Moon, is great. FANtastic, full of weird drugs, sex, murders, people with rats in their heads. The Boppers are desperate and vindictive here, war and evolution pushing them to the edge.

Second arc about Della and her new "son" on Earth is annoying, weird, and… As Cobb says, "Della's parents are jerks, I'll tell you that much. What kind of couple is named Jason and Amy?" Cousin Willy Taze screwing around (sometimes literally) with AIs is the only redeeming part of this entire shitty set of chapters. The Gimmie (easily the best name ever for the Federal government) reacts only with murder and fear, like usual. While I mostly agree with the principles of "Manchile's Thang!", the free love equality cult, I dislike every part of the delivery.

Third arc back on the Moon, and the end of the Boppers, seems a little formulaic crime drama for a while, until it gets into what price Stahn's willing to pay for revenge and to recover his wife in any form. The weapon used is interesting; as our chips get more complex, side attacks like that look more practical. The moldies and Happy Cloak's return are all friendly and heroic here, which is… not how it'll be in later books.
★★★★☆

The first book is under 180 pages, and it flew past in a couple days; it's dense but fast, a lightspeed bullet to shatter your brain. Second's just over 200, feels much longer, and took me a couple starts; most of the good parts in 5 days, but then after the second arc I paused a couple weeks. Freeware is 300. Realware is another 315. And I recall these aren't any less dense. May need some lighter fare first.