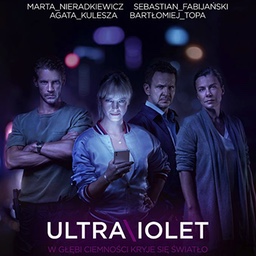 No, not the vampire movie, nor the shitty DRM video system. The Polish crime drama. It is all but impossible to search for a title like this.

A Buffy-like chick: blonde, vapid, argumentative, shitty family life, etc., except she's supposedly 30 instead of 16, is working as an Uber driver in Lódz, Poland, sees a girl thrown off a bridge. The cops call it a suicide, she disagrees, and starts investigating. Finds a quasi-secret society of "Ultra-Violets" (the explanation of the name is so ludicrous you have to watch to hear it) who hang out in a Slack with a purple backslash icon and solve murders while supposedly doing their real jobs.

Social media-solves-crime is not a bad premise for a show, even if mostly social media-causes-crime in reality, and the chat and screens are usually captioned well enough to make sense despite being in Polish.

Lódz really isn't grim enough for my "Grim Scandinavian Drama" taste, just a little run-down, not cheerful enough for it to be ironic like Death in Paradise. It's like setting a crime drama in Boise or Salt Lake City; death's a bit of a relief, but not an omnipresent gloom.

The acting's a problem. Buffy, er, Ola wavers from nonentity to annoying. The useful cop is barely present. There is less chemistry between them than between noble gasses in sealed glass jars. Mom's a crying stereotype. Older dude Henryk is not bad, he might be an actual actor. The dirty cop is either stoic or stoned. The "Ultra-Violets" (snicker) are only on-screen for a line or two at a time, mostly from behind.

If they got some acting lessons, this could be watchable; as it is, it's on the "occasional watch if I'm bored" list.
★★★☆☆