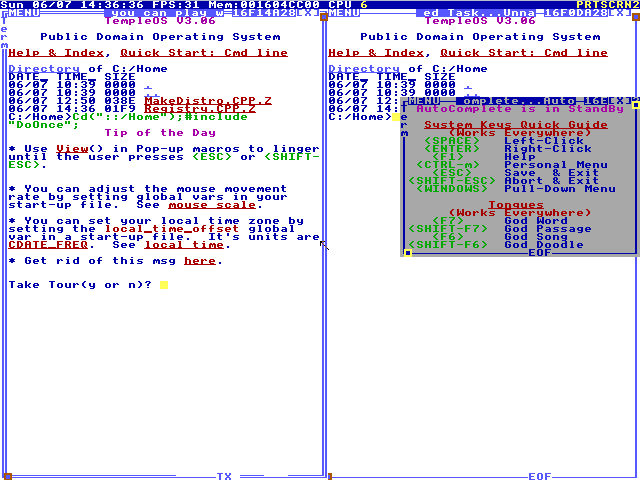 A long, in-depth documentary on the late Terry A. Davis, author of LoseThos (pun of Win-Dows), later called TempleOS.

I'd seen Davis online for a couple decades, but never got far into following him. Davis was an aggressive, bizarrely incoherent "speaking in tongues" Christian racist who hated atheists, the CIA, and "N----rs", so you'd see his posts online and then he'd get downvoted or banned.

His OS, however, is fascinating. 64-bit, limited to VGA graphics, mostly but not solely single-tasking, no Internet or other networking, has a reasonably efficient Norton-style UI with hypertext everywhere, but constant scrolling, blinking, pop-up Bible quotes and hymns which would be maddening. All of which makes it weird but not that interesting, except it was written in assembly by one guy.

In college CompSci classes, you may "write an OS" which mostly means copying Andrew S. Tanenbaum's Minix piece-by-piece until you have a working Minix; which is great, Minix is fun, but this is a far more impressive feat.

That's one of the most coherent explanations of the appeal of retrocomputing and low-level programming anyone's ever stated.

There's some interesting features, which are hard to get in modern OSs:

His long downward spiral of trying to be noticed online, then going off his anti-psychotic meds, his conspiracy theories, his embarrassing video streams, and then his final homeless wandering and death, are very troubling. For a long time he appeared to be getting by on donations from 8chan members simultaneously trolling him and supporting him. We do nothing to help these people, and let online gangs take advantage of them.