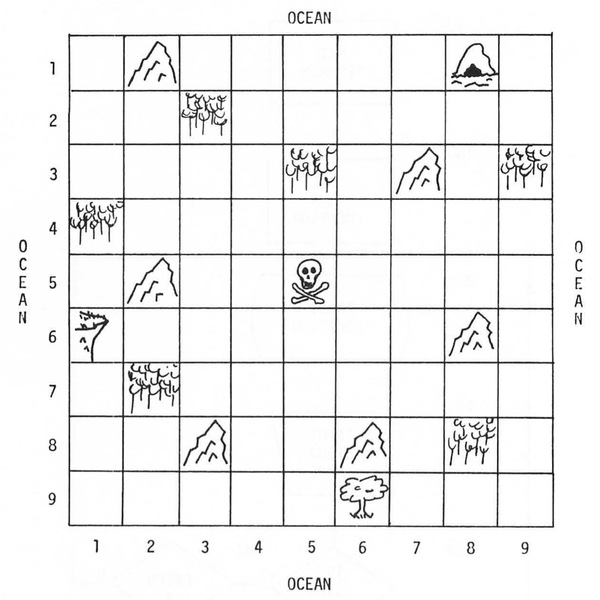 In 1979, I learned to program in BASIC on a TRS-80 Model I. Sometime in the next year, I read one of my first programming books:

I played Monster Chase and Lost Treasure, modified them extensively, and combined them, so the cave on the island had a monster chase to reach the exit. I recall having problems getting Starship Alpha and Devil's Dungeon to work, but they joined my software library eventually.

One of my earliest and happiest programming memories was sitting at the dining room table, reading Monster Chase, and writing out a smarter movement system and obstacles in a notebook; at the time the only computers were at school, so I wrote code on paper and typed them in later.

So when I found the book again on archive.org last night, I was very excited, and had to reimplement it. I actually typed this into Pythonista on my phone with the PDF open on an iPad, only moved it to the computer to do some final cleanup and upload it.

The book suggests some modifications, and I did some minor ones: Lowered the movement error to 10%, and risk of shark attack to 10%, rising by 1.5x rather than a flat +50% each time; being anywhere near the island edge killed you too often in the original. I also don't move you out of the water automatically, that should cost a turn.

I realized in converting it that I hate, hate, hate Row,Column coordinates instead of Cartesian X,Y; tons of mainframe-era computing resources used Row,Column, and you can still see it in some APIs like Curses. Note that the original program is 74 lines, mine's 214; BASIC is a terrible language, but it's terse.

I could adapt this into another doorgame for my Mystic Dungeon BBS, but I'm not sure what the multiplayer aspect would be, and it has limited replayability without doing some randomization.