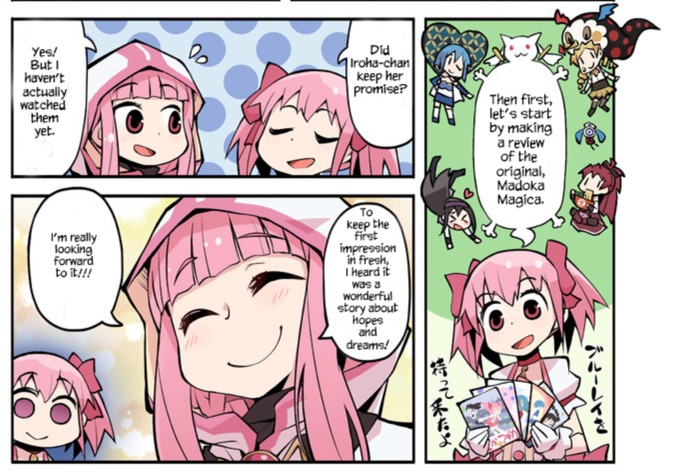 The JP site has little weekly update comics, which have mostly been translated by fans:

Mostly just gags about bad pulls and events after they're over (in JP timeline; the EN timeline should be following the same pattern eventually), but a few honestly great jokes about Madoka like the one above. (in case you didn't know, read right to left)

Two pulls got me a better tree AOE DPS ★★☆☆ (Hinano is a monster in combat, everything dies in explosions), a fire DPS ★★☆☆, a light support ★★☆☆ (totally useless because main is light support), and… dark vampire DPS ★★★★! Hooray! Not the one I want, but an acceptable start. 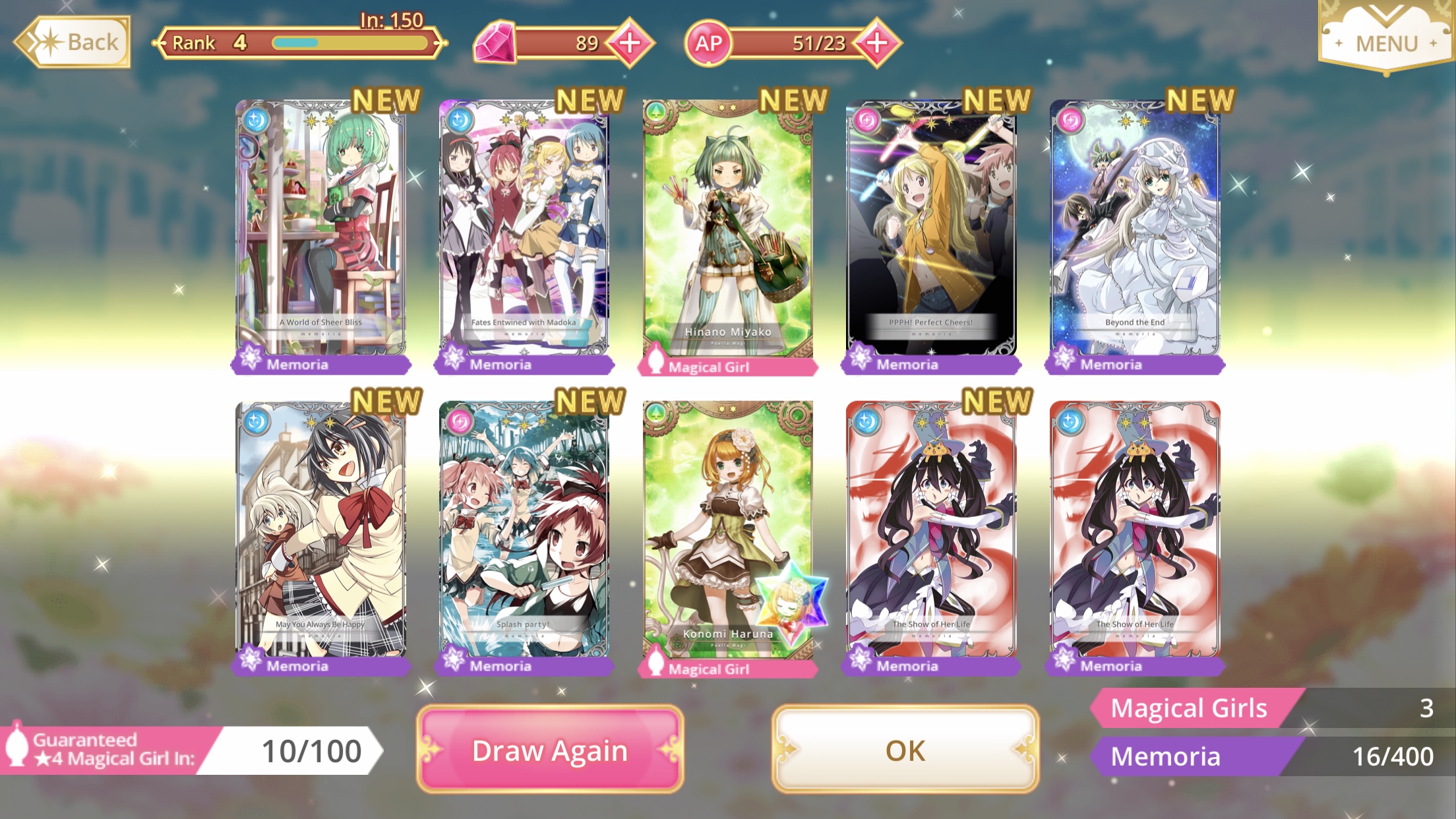 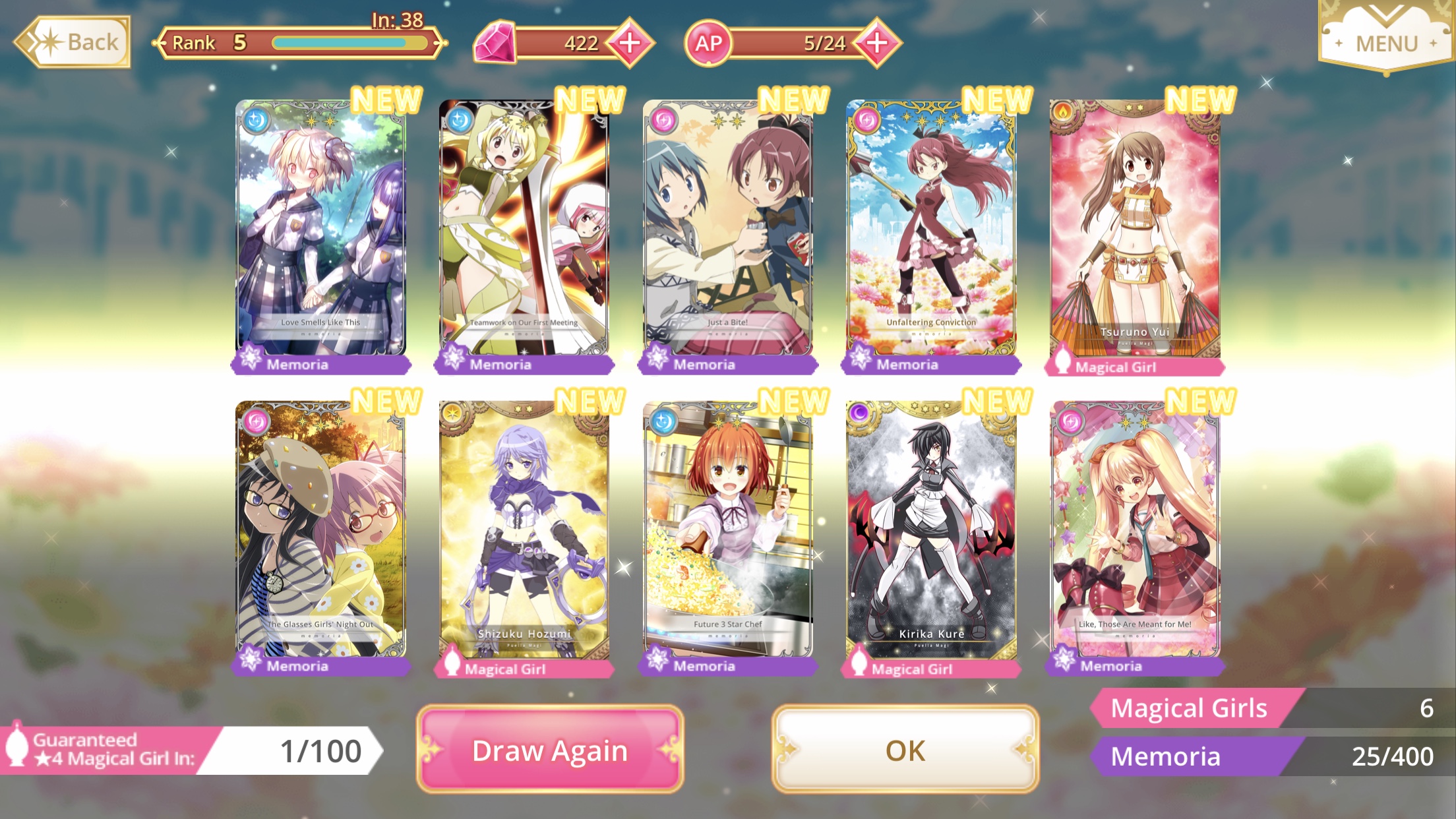 Figured out where the equipment is, you get "Memoria" cards which give boosts and skills, assign them on the team screen, and eventually you can unlock up to 4 slots for these. I got a few ★★★★ cards from a free support pull (forgot to screenshot it) and they make a huge difference in killing shit above my level. Before, I near TPKd once, had a few HP left on one girl when I finished a fight, everyone else was dead (well, KO; you can't kill magical girls without SPOILER). Now nobody goes below half HP even fighting twice my level.

Tactically it's getting pretty interesting. I wish I had more combat layouts. The T-shaped one is more powerful, but gets me hammered by any AOE mobs. The X-shaped default only buffs one girl, and the main needs DEF UP to survive, but ATK UP is wasted on her. But I'm not willing to pay real money for the one I see in the shop, so it's grind grind time.

They really got the witch art style from the series into the game: 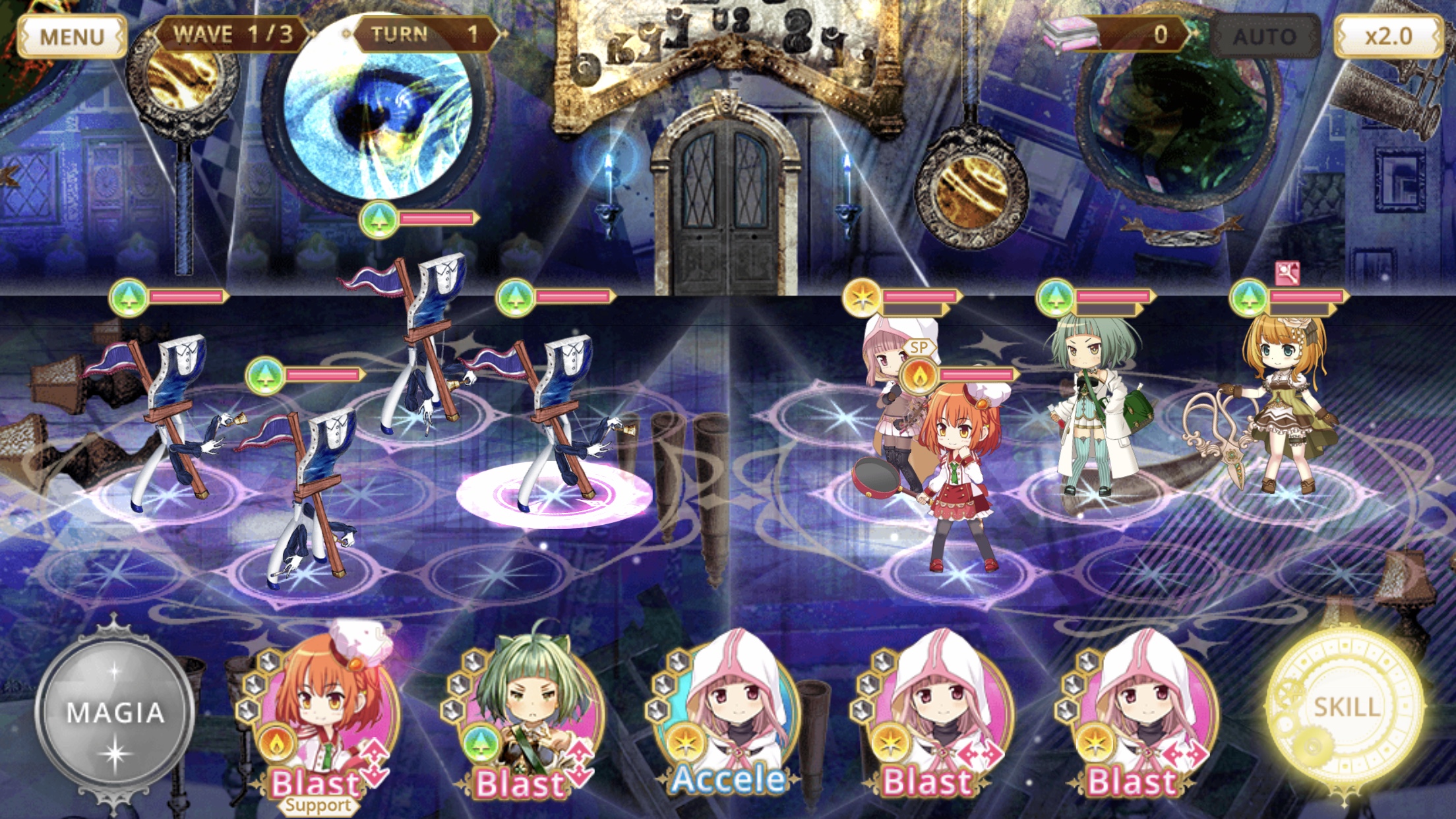 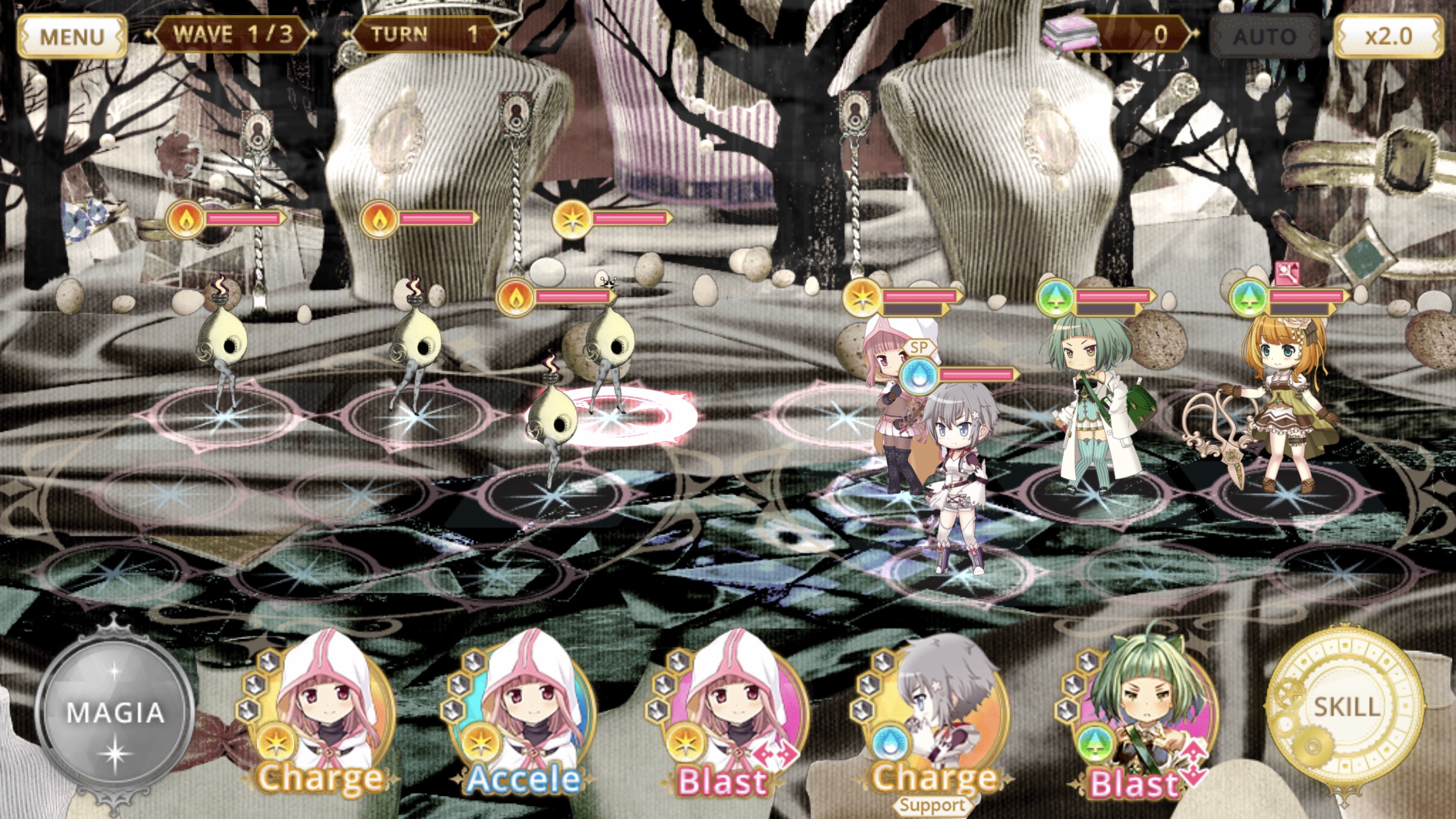 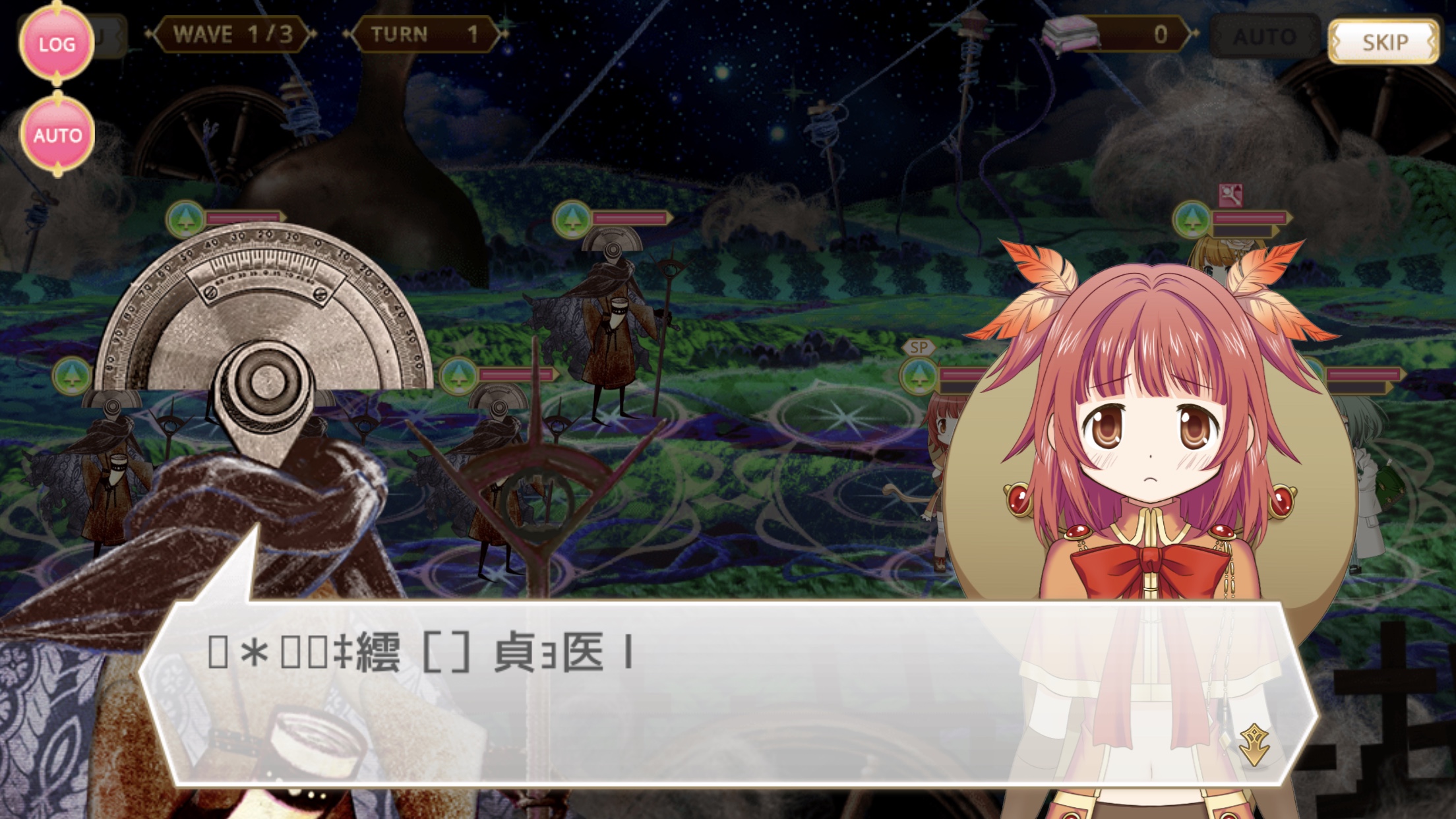 The one complaint I have is there's not a lot of Energy. So it's back to playing for half an hour, putting it down for 12 hours. Which is good discipline but normally mobage give you a huge burst of Energy at the start of the game to draw you in, before hitting you with the hard reality of the money-or-time economy. I'm not buying Energy potions or whatever they're called. I miss DanMachi's near-endless supply of "potato snacks" to restore Energy, from just doing dailies. You could run out, but it took grinding all day to do that.