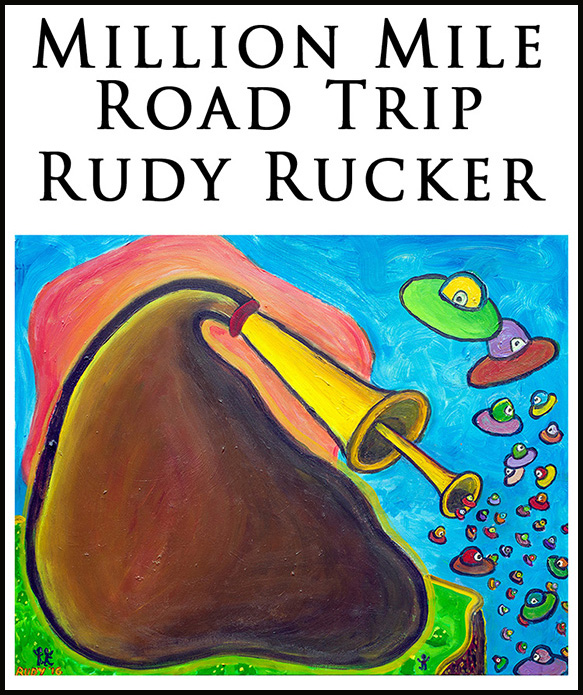 It gets weirder from there, as usual. The cosmology and physics are bizarre, more like one of Greg Egan's math-Universe books without the math. Strange aliens are everywhere, UFOs aren't at all what we normally think, and a super difficult quest. Lot of "teen romance", sex without understanding the consequences (not judgmental, just literally they don't understand what happens!)

"Via my teep slug, I wit your brother was laid low by a Freeth." says Filkar. "And you took a coward's way out. Here's solace: oft a Freeth seeks only to stun, and not to slay. Let us therefore suppose that Villy is hale. How do you regain face? Return bearing the benison of a teep slug."
Scud goes for it. The slug is an add-on. A power-up. He extracts the dusty spice jar from his jeans and drops a caraway seed onto flat Filkar. The gingerbread man bucks and shudders, absorbing the seed's fragrant biochemical essence and, very clearly, feeling the better for it.
—Rudy Rucker, "Million Mile Road Trip"

But then eventually it falls apart, you can't actually narrate a million miles of driving (or flying), it's just too much. The book could be 1000 pages instead of 400-ish and it wouldn't be enough. You can see the exact paragraph where Rudy went "uuuuuuhhhhh… wtf now" and basically skips to the ending. The final Boss Fight is hard to follow, in spaces without space, time that doesn't pass, and everything's resolved too fast.

It's so rushed in parts, and so overly ambitious it can't be complete. The characters would be better a little older, On the Road was about Jack Kerouac's adventures in his 20s (and written in his '30s), making the sex, drugs, jazz, and murders less skeevy.

The book web page has notes with a lot more background material that didn't make it in. 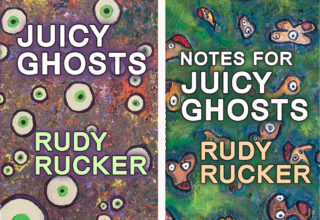