A summary of this #OGL thing I've been angry about on fediverse all week/month, and how it affects my plans.

So, Wizards of the Coast/Hasbro had been working on their "One D&D"/6E playtest/previews, which has been previously held in only moderate contempt here. And then they decided to update the license.

Since 2000, we've had the Open Game License (OGL) 1.0a, which lets you reuse anything else put under it, like the System Reference Document (SRD) of D&D 3.0; I used that in my Stone Halls & Serpent Men game, mainly to copy spells & monsters. This has allowed a massive ecosystem of vaguely-D&D-ish games to flourish, as well as used for very not-D&D games like Legend and OpenQuest, and Cepheus Engine.

Paizo does not believe that the OGL 1.0a can be “deauthorized,” ever. While we are prepared to argue that point in a court of law if need be, we don’t want to have to do that, and we know that many of our fellow publishers are not in a position to do so.
We have no interest whatsoever in Wizards’ new OGL. Instead, we have a plan that we believe will irrevocably and unquestionably keep alive the spirit of the Open Game License. …
In addition to Paizo, Kobold Press, Chaosium, Legendary Games, and a growing list of publishers have already agreed to participate in the Open RPG Creative License, and in the coming days we hope and expect to add substantially to this group. …
We’ll be there at your side. You can count on us not to go back on our word.

I'm slightly disappointed their promo image is their dumb Human Fighter "iconic" leading the charge, and not an Orc.

So my retroclone is toast. I'd have to scrub a lot of monster & spell text to get rid of the SRD, and that's being done better by BFRPG. I can package some of what I wrote as a sourcebook for that. It's B/X-ish, not Holmes, but I'm adaptable, and I can fix some of the tone by making new species-as-class combinations and minor rules tweaks. Might be a good zine type thing.

My roguelike is based on my retroclone, but it's mostly naming issues, easily fixed. Fucking Hasbro claiming OGL doesn't cover videogames, I'll show them a pantomime.

I toyed with shifting to d100 and I can borrow more from OpenQuest than Legend and be legally safer, but I dunno if that's useful to anyone. Just play OpenQuest, delete all the divine & shaman nonsense, and throw 50% more zombies at everyone, and it's just like I'd done it!

My sword & planet game I'll keep working on, and either release as CC-BY-SA, or ORC, depending on how that looks.

However, it’s clear from the reaction that we rolled a 1.

It has become clear that it is no longer possible to fully achieve all three goals while still staying true to our principles. So, here is what we are doing.

I had a useful JavaScript utility hidden away in the source for my Stone Halls & Serpent Men game, so I extracted it into its own thing:

Especially with people doing the #dungeon23 challenge, it may be helpful for quickly drawing a dungeon, roguelike style.

I'm pondering doing a full wilderness + dungeon adventure again sometime soon, and I'll likely use Tilemap for it, but I sure won't be doing a room a day or anything like that! 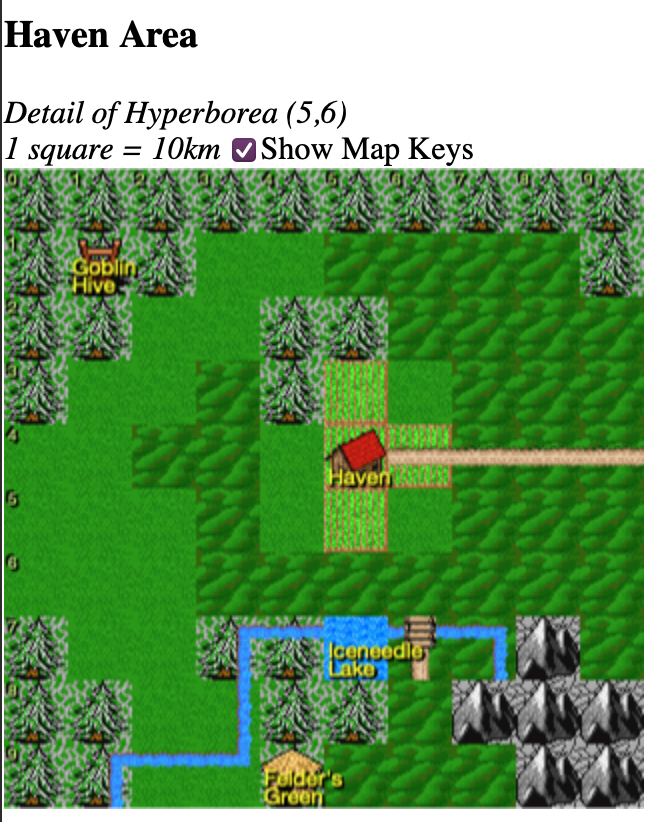 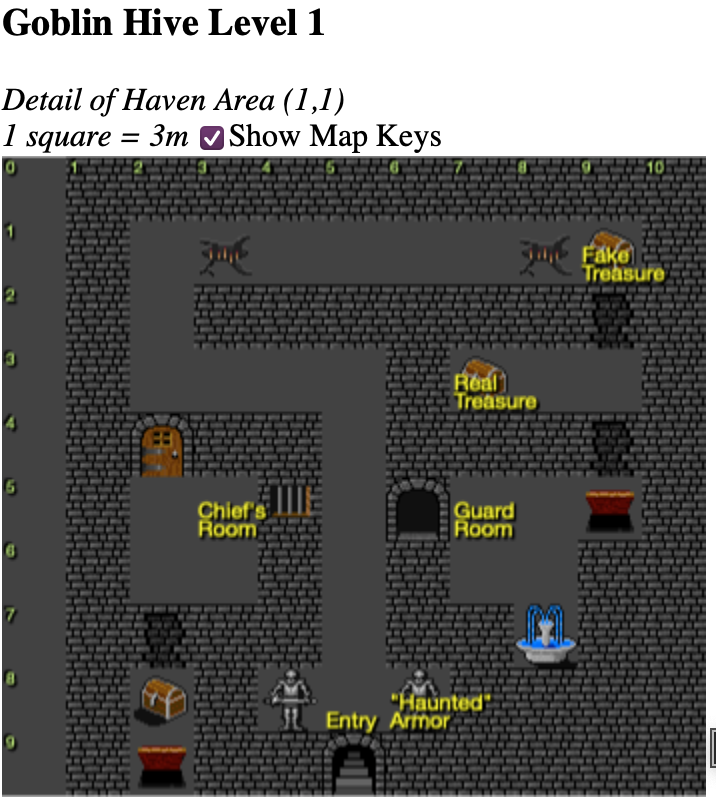 I was looking at my Gamma World 1E and GW1 Legion of Gold reprints from drivethrurpg — the first RPG I ever ran, and my one true love system, tho my old copy was destroyed by flooding decades ago — and discovered that even in 1978, the rot had set in, tho I ignored it then and now.

I speak, of course, of "more generous" systems for generating stats.

Character personae are created at the beginning of the campaign, endowed with certain basic attributes through the roll of dice. First, each player must choose to play either Pure Strain Human, humanoid, or mutated animal-type characters (the advantages and disadvantages of each of these three categories will be explained momentarily). Having selected the type of character he wishes to play, the player then rolls three six-sided dice to determine the relative strengths of each of his character's six basic attributes: mental strength, intelligence, dexterity, charisma, constitution, and physical strength. As a general rule, a roll of 3-8 for a given attribute indicates a weak trait, 9-12 is average, and 13-18 is above average. The relative strengths of certain attributes can (and most likely will) change during the course of the campaign, due to mutation, acquired experience, or some other method devised by the referee.

It is desirable that few, if any, of a player character's basic attributes be below average. Player characters represent an elite with the desire, the initiative, and the ability to venture outside the boundaries of the village, town, or tribal lands. They are the pioneers, explorers, and tamers of the vast wilderness. It is they who will eventually bring order to the chaos of GAMMA WORLD and an end to the Black Years. To increase the player's chances of rolling up an exceptional character, the referee will find it advisable to use the following method: for each basic attribute, the player rolls four dice (4d6) but totals only the highest three. If, for example, the player rolled 4, 3, 5, 1 on the four dice, he would add together 4+3+5=12 and leave out the 1. If he rolled 4, 3, 2, 2 he would add 4+3+2=9 and leave out the second 2. While it is still possible to roll very low numbers (3, 2, 2, 1), the player's chances of rolling an average to above average character are greatly increased.
—Gamma World (1978), James M. Ward and Gary Jaquet

But just 2 years earlier in Metamorphosis Alpha, no such mercies are given:

A human player will roll 3 six-sided dice several times for the abilities he or she has at the start of the game. Each player has the following abilities: radiation resistance, mental resistance, dexterity, constitution, strength, and leadership potential.
—Metamorphosis Alpha (1976), James M. Ward

So I strongly suspect the 4d6 keep 3 paragraph was added by Jaquet to fit with Gary Gygax's AD&D stat inflation. The shift from every other part of GW being "grubby scavengers trying not to die" to this Manifest Destiny "heroes of the Black Years!" bullshit is also stinky. We love chaos! We hate order! Down with civilization! You don't play Gamma World to be a farmer and accountant, you do it to be a weird mutant viking beaver with a laser pistol and a STOP sign shield!

Method I:
All scores are recorded and arranged in the order the player desires. 4d6 are rolled, and the lowest die (or one of the lower) is discarded.
Method II:
All scores are recorded and arranged as in Method I. 3d6 are rolled 12 times and the highest 6 scores are retained.
Method III:
Scores rolled are according to each ability category, in order, STRENGTH, INTELLIGENCE, WISDOM, DEXTERITY, CONSTITUTION, CHARISMA. 3d6 are rolled 6 times for each ability, and the highest score in each category is retained for that category.
Method IV:
3d6 are rolled sufficient times to generate the 6 ability scores, in order, for 12 characters, The player then selects the single set of scores which he or she finds most desirable and these scores are noted on the character record sheet.

I'm tempted to write a little simulation script to see just how insane those stats are; it should basically be impossible to have anything under a 13 out of 18 with Methods II and III. I almost don't hate Method IV, I've allowed that with just 1-3 alternates instead of 12. Method I is what D&D 5E uses.

Tunnels & Trolls also from 1975, was 3d6 six times in order, though later editions added "triples add and roll over" (TARO) for superheroic characters, and non-Humans multiply various stats by anything from 0.25 to 2.0; but since T&T characters increase their stats as they level, that was just a head start, not unbalance.

The appeal of those early games was a normal, maybe a little better than average schlub, working their way up by way of good stats, player intelligence & skill, luck, hard work grinding out experience, cowardice, and ruthless treachery, until they were slightly less likely to explode in a blood geyser at the first papercut. If you made it to 3rd level, you were good, and extremely attached to your character. If you made it to 9th, you quit because you had won, and it was time to start over with one of your henchmen.

If you can just get another guy from the vending machine with high stats, who cares if you die? You'll come right back. Not that you can actually die in 5E, it's basically Toon with swords.

There is an argument that old-school games didn't give high bonuses to stats, which is true… but we did make a lot of stat rolls, long before such things were official. The Perrin Conventions (see Dexterity Roll) and RuneQuest formalized what a lot of us had always done: Roll stat x 5% on percentile, or d20 or 3d6 roll under. The guy who taught me used 3d6 for average, 2d6 easy, 4d6 hard, roll under your stat; I don't recall if all 6's were always a failure, but that's how I used it.

Oh, you know I've posted about this, but not the specific mechanics, a couple years ago on my Mark Rolls Dice blog