13,000 days since extinction event, a single robot Mother raises a young girl (Clara Rugaard) in an advanced complex, the first to repopulate the Earth. Everyone outside is presumed dead from plague. Until a stranger shows up.

Most of the plot is based on who is lying or just deluded, and it turns out everyone, all the time.

The sets are great, sterile industrial Terminator vibe to everything.

"I took it with equanimity, however: I've long known that fortune's a whore and life itself a kind of stupid muddle. I am not a religious man. Far from it. I hold, if anything, a belief which I believe was once ascribed to the Gnostic: that Satan won out over God, not the other way around, and the Dark Prince runs things in the dismal and disastrous way that suits his nature. I knew that everything was just chance and bad luck, in a universe in which things were stacked against us and even our ruling deity hated us."
—Robert Sheckley, "The Eryx"

Great little anthology, Walter Jon Williams' "Lethe" in particular hits a Zelazny note (not the first time; his Ace Double "Elegy for Angels and Dogs" sequel to Zelazny's "The Graveyard Heart" is fantastic), "The Eryx" is the kind of wiseass story Sheckley told in all his work, with a little Zelazny mysticism. Some of these are more poetic fantasy than I'm really into, but that was also Zelazny's thing. 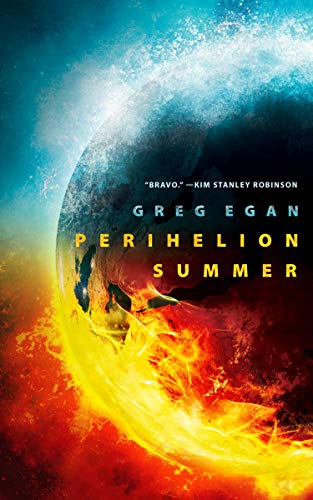 Cosmic catastrophe, in this case a close fly-by of a black hole Taraxippus, has long-term consequences for Earth's climate, and people on a rickety fish-farming ship try to survive and make the best use of it.

Perihelion Summer, on the other hand, is written by someone who can do math and science. So the means of tracking the black hole makes sense, the physics of the catastrophe make sense.

It's also mercifully short, though that sometimes comes at a cost. The initial crew of the Mandjet (one of the ancient Egyptian names for the ship of the Sun) is small, but poorly described; and having both Arun and Aaron in the crew is a little confusing. Egan's never been strong at dialogue, does his characterization through actions and scientific discovery, which needs more page count. The action moves forward in time rapidly, letting us deal with the consequences now rather than in hundreds of pages.

Matt said, “Let me start by saying that if we end up in prison, I promise to install ceiling insulation and double glazing in all of your cells.”

The coming apocalypse and the migrations necessary to survive, are what this is all about. Part of this is Egan's perspective in the Southern hemisphere, which already has a terrible temperature gradient and Australia's genocidal immigration policies; if that gets worse, billions die. And not entirely off-page like so many other catastrophe books.

“But however vast the fleet, however crowded the decks and holds of every fleeing vessel, they would always be outnumbered by the ones they’d left behind.”

The American solution to some of the problems isn't the Southern solution, which changes the tone quite a few times.

The ending's a bit abrupt. I'm still very pleased with it.

Hopefully with less* John Scalzi and Call of Duty machinima, and more** women writers this time.

* Preferably zero. Is negative Scalzi possible? I'd like that. The guy wrote a couple good pulps once, but he self-promotes like he's selling Pepsi.
** As opposed to zero in the first season?

I wanted more Godzilla, but the classic Toho collections are unclearly listed on 'Zon and elsewhere, I want only Japanese-language (English subtitle) theatrical versions and many are 4:3 English-dubbed TV versions. So… I'm putting this off until I can do some real research, and bought an iTunes two-pack of Godzilla (2014) and Kong: Skull Island (2017). Silly American films, but at least I know what they are.

Sort of: I didn't realize Kong Skull Island was a Vietnam-era period piece. That's kinda cool. Sam Jackson at 71 was really way, way too old to be a field officer (Lt Colonel); he's badass and insane, as usual, but it's like your grampa being badass and insane, not like a midlife officer going all Colonel Kurtz up in the jungle. The grunts are mostly personality-free, except for one played by Shea Whigham, and they serve only as expedition "hit points", getting picked off one by one so we can see how much danger the civilians are in. It is very, very, very Apocalypse Now-derived in style.

Hiddleston as the tracker J. Conrad (ha ha Heart of Darkness reference, but yeah…) is bland but effective, a Ken doll with all the hunting accessories and a lot of dialog which he recites competently, but slightly less than alive. Brie Larson as the photographer "Mason" Weaver has no motivation, and a weird boxy face, but at least she has an active role, and only once has to be saved by Kong and improbably held in his hand during a fight. John Goodman and Corey Hawkins do great as the lunatic scholars/scientists organizing the mission; sadly Jing Tian as the biologist does nothing and has almost no lines, despite this being exactly the kind of thing a biologist should be interested in and have a bunch of infodumping to do. The film fails the Bechdel Test because there's really only one female speaking role.

John C Reilly's comic relief role is… well, not the worst thing I've seen. They didn't spend too much time making jokes at his expense. He's awful fat and pale for a guy who's lived among skinny primitive people on an Indian Ocean jungle island for 30 years.

The chopper pilots are really foolish and don't understand the point of a long-range gun. A realistic (OK, physics of titans whatever man) fight between Kong and a bunch of Hueys with heavy machine guns and bombs does not go well for Kong; they should hover 100-500m away and just whittle him down to chipped beef, not go mano a mano with an ape who likes throwing rocks and trees.

The giant bugs and pseudo-pterodactyls all do physically implausible things, but they're scary monsters in a kaiju film. OK.

"We're not gonna talk about this? This is not normal! Stuff like that does not happen!"

The face/heel turns for Sam Jackson and Kong midway through were obviously telegraphed from the start (which is why I don't even bother to say "spoiler"). The soldier's love of war for its own sake, against Kong's self-defense and (usually) mercy for Humans who don't attack him.

So all of this makes a functional movie by itself. Then there's the bad kaiju, and here it kind of falls apart.

The "Skullcrawlers" are weird. They're based loosely on the two-legged skinks from the original King Kong, but the skull head is ridiculous, and they're very smart tactically (completely at odds with how lizards hunt) and then just line up to attack one at a time; they're all CGI, so why are they shot like there's just one suit?

The extreme plot convenience of a skullcrawler giving the tracker useful information during the fight, I would normally give a pass to one deus ex machina, but then the confrontation is almost completely ineffective.

I barely noticed the music, other than some '70s rock records which the grunts inexplicably took along on a 3-day combat mission; a soundtrack driving the tone of the film would've helped.

The problem with King Kong movies (other than the Toho ones which just use him as a normal kaiju), they all struggle with complexity. The basic premise is:

That's enough for a good story, but then each filmmaker piles a bunch of stuff on top:

And pretty much none of this works. They pad out a film to 2-3 hours and take away from the thing that matters: King Kong.

Lovely film. The monsters look and sound amazing, the music is great, the monster fight scenes are long, complex, and more visible than the previous American Godzilla (2014). This really is on par with the Toho movies, and respectful. It takes thousands of people and $200M to accomplish what Ishiro Honda did with $175K ($1.662M after inflation), a few dozen people, and a rubber suit. They have a nice credit memorial to Haruo Nakajima (1929-2017), the original Godzilla actor.

The mythology and backstory for the monsters is a nice touch, the kind of pseudo-scientific gobbledigook Toho does. The literal deus ex machina plot device is annoying, but functional, it drives the plot along.

Naturally, I sympathize entirely with the villains. Their motivation is the only sane response; the evil megacorp (led by the dumbass CEO from Silicon Valley) and military trying to destroy the kaiju are insane and species-suicidal. Ken Watanabe is great, and Zhang Ziyi and Bradley Whitford (who I think of as TV's Frank Jr, but he was on West Wing) are interesting and given good lines. Most of the other Humans I could do without, especially the annoying screaming child and the "hero" who shares my name.

The credits sequence bears rewatching, there's a lot of details there and I couldn't follow all of them; and there's a post-credits sequence, so stick around for that. The next sequel should be interesting.

This is PG-13, but there's nothing above PG in it, and really should have been in a few places; it's obvious scenes were cut or written around to avoid violence and, uh, suggestive monster behavior. So I'm dinging it a half-star for that and the screaming girl who should've been the first one eaten.