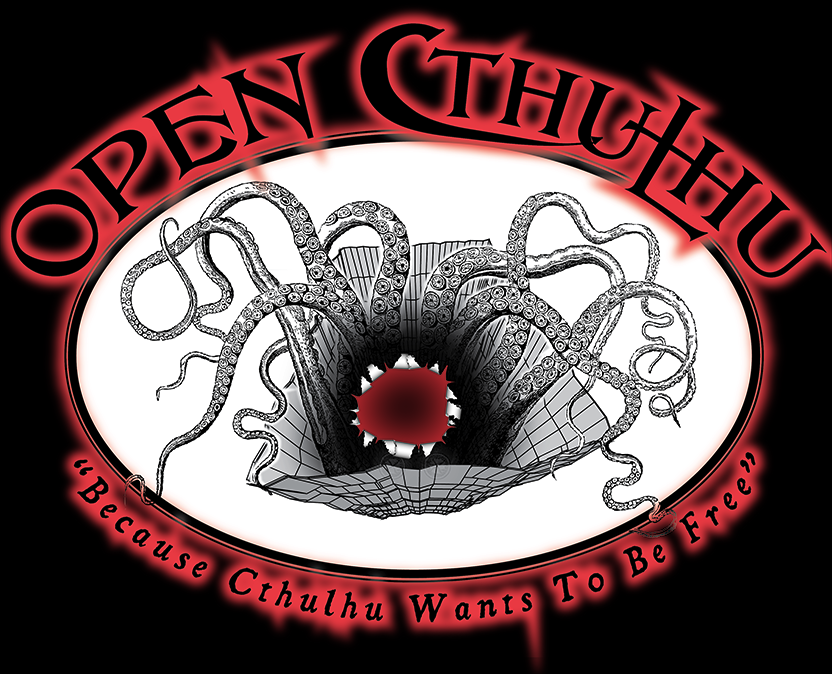 And Chaosium's reaction to the threat to their cash cow:

"That is correct. We are releasing a BRP Open Game License and a BRP SRD. The SRD is a core BRP rules document that people are authorized to create derivative works from, including rules expansions, etc. But certain things are going to be off limits - you can't use the BRP rules to create your own game using the Cthulhu Mythos. Or your own version of Pendragon. Etc."
—Jeff at Chaosium

So, a little context. After H.P. Lovecraft's death, his friend and executor Professor Robert H. Barlow was cut out of control of the publishing estate by con man and hack writer August Derleth, who founded Arkham House to exploit Lovecraft's work. In the '70s, Sandy Petersen wrote RuneQuest for Greg Stafford's Glorantha setting, and founded Chaosium. In the early '80s, Sandy got a license from Arkham House (upstaging TSR which had a… looser arrangement… and had to remove Lovecraftiana from their books) and wrote Call of Cthulhu. And while everyone loves classic CoC, it never lent itself well to fan publishing or 3rd-party publishing because you had to deal with Chaosium for a license.

Chaosium has for 40 years asserted that they own Lovecraft, works, body, and soul. Well, with copyright expiration and his work being clearly in the public domain now, nobody really cares what Chaosium or Arkham House think about that anymore. It certainly doesn't help that the "7th Edition" Call of Cthulhu is incompatible with the 1st-6th Editions, so there's those of us with 40 years of playing this game, and the "official" game which nobody plays.

Mongoose Publishing had a license for RuneQuest in the 2000s, and then released a clean-room OGL book Legend, which is an excellent RuneQuest-minus-Glorantha system, cheap, and unambiguously clear of Chaosium's ownership.

There's a couple of other Lovecraftian RPGs:

Open Cthulhu: Because Cthulhu Wants to be Free

The current PDF is a pre-layout beta, no art, so I can only evaluate the rules.

Mechanically, it's CoC 6E, more or less, classic stats. Combat's streamlined quite a bit from the case-point mess of 6E, and you are directly instructed to inflict SAN rolls for committing violence, murder, and such, as well as the supernatural.

The implied setting is the 1920s-30s, but there's a decent chapter on customizing the setting, including a fairly extensive treatment of the Dreamlands, and rules for entering, leaving, and manipulating the Dreamlands! The Mythos tomes are limited to 5 translations of the Necronomicon, the Book of Dyzan, and The King in Yellow; most others have licensing entanglements.

Unlike Chaosium's "I shoot Cthulhu with a rocket launcher!" stats, Open Cthulhu doesn't give the Great Old Ones normal stats or limit their abilities; the Keeper is the author of the story and can do as they please. I like these guidelines:

Other monsters are almost entirely those from Lovecraft, not Derleth and such. The "Byakhee" are here called "Winged Servants" because Lovecraft didn't name them in "The Festival". The rather ludicrous presence of Mummies, Werewolves, Vampires, and such that would've made good old H.P. sigh with disdain is carried along from Chaosium's kitchen-sink approach; and yet they don't have Frankenstein's Monster, one of the few that H.P. liked! Stats are given for many of his characters, presumably prior to the events of their stories.

A compact but useful library of Mythos spells and artifacts adapted from the books finishes up.

I wouldn't classify this as more than halfway done; OpenCthulhu calls it 1.0a, which only makes sense if they're thinking it'll be done at 6.0. There's one skill for all "special gear" by which they mean photocopiers, computers, DNA sequencers, rockets, and any other tech which isn't a car or firearm; fine for 1920, incredibly stupid for modern games. There's no equipment lists, and while you can find online scans of Sears catalogs from the 1920s-1980s, things get more difficult after that. The weapons and armor system is greatly inadequate for modern games, and I hate low-fixed-value armor like CoC has used in most versions; the RuneQuest/Stormbringer-style random-roll armor is better. The bestiary could use work. Magic spells outside of just the Mythos aren't addressed, and for many games those are important.

But what is here, is a better Call of Cthulhu (almost but not yet a better universal Basic Role-Playing) than Chaosium has, and it's under the OGL so you can make your own, and write materials for it without arguing with anyone. I'm thinking I'll write up some adventures, maybe go back and re-adapt "Nightmare Eve" and my "Shotguns & Strip Malls" games into Open Cthulhu.