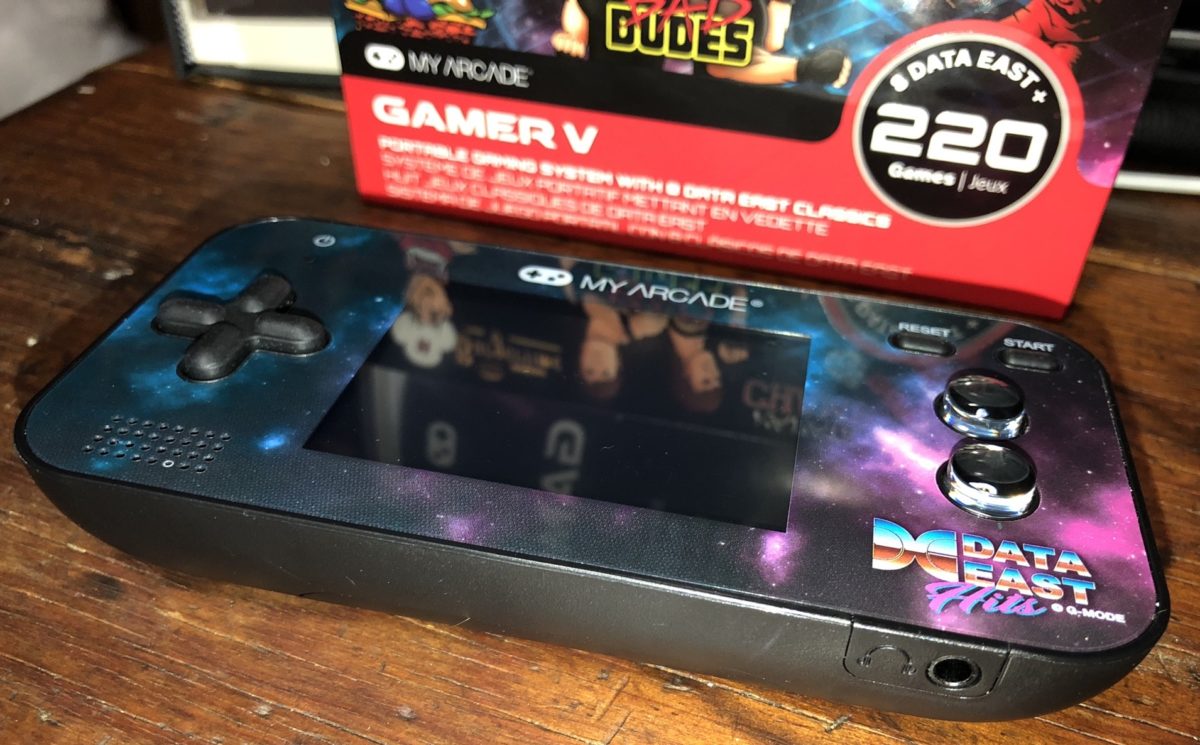 Shopping, I went past the cheap videogames aisle, and saw the MyArcade handhelds and retro consoles were out, and marked down (Xmas season starts in November!). So I grabbed the $17 8-bit Bad Dudes one; there are vastly better ones, with 16-bit or better consoles, but those cost real money. 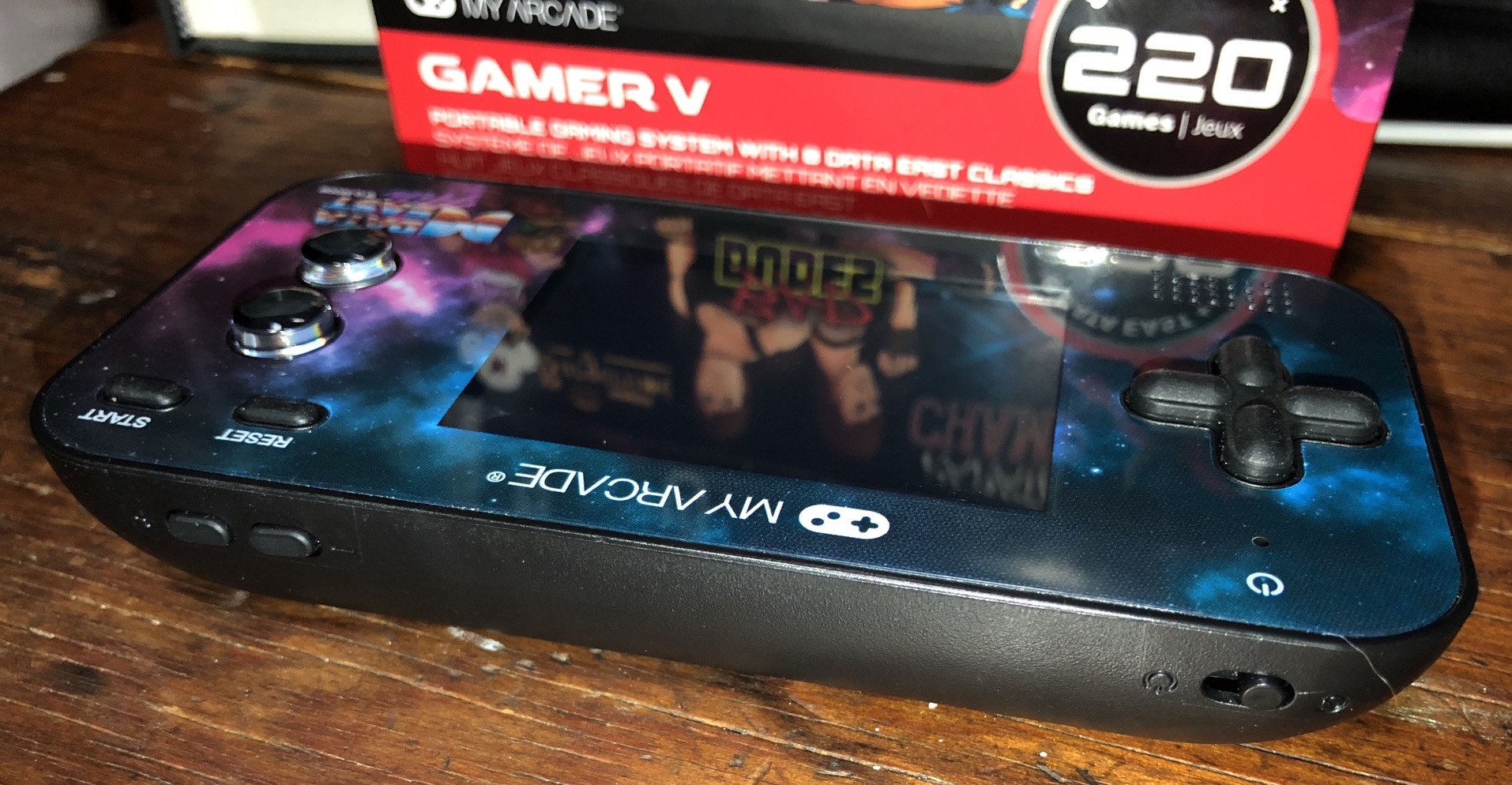 It's kind of fat, rounded bottom, takes 4 AAA batteries. Screen is bright, but has a very limited angle, seems cut off on the right side in some games that would've used overscan on a CRT, even the main menu loses a few right pixels. When there's a lot of sprites, it flickers, which would've been fine on a CRT with ghosting, but looks bad on an LCD. Sound is loud but tinny and mono in the speaker, just one step up from "beep", but really quite nice multi-channel chiptune on the headphones (yay, 3.5mm jack!). The D-pad and buttons are stiff and maybe not super-responsive, I think once it loosens up a little it'll be pretty good controls. The way to look at it is, this would be unobtainably good for any price in the '80s or '90s, infinitely better than a Nintendo GameBoy Color or Atari Lynx, even if it's a cheesy toy for pocket money today.

The games are all NES or SNES ports and retro-clones. A few are recognizably Data East, others are ridiculous ripoffs and some original games. I don't know where they get these, but they're kind of amazing, if a little trashy. My Scheme Jump & Bump project is about me making these kind of trash games for modern computers.

I easily got to the first boss in Bad Dudes, and then died horribly three times against him. Played some of the other random games, and they mostly work fine. The lack of instructions is killing me, though. Several games make no sense but seem to have more game going on; I can't get keys to drop from mobs in Enchanter, so I can't move on. So I need to do some research.

Here's all the games. If you see something interesting, let me know in comments, otherwise I might be semi-randomly wandering these.

"I was actually tired of sword-and-sorcery as the genre then existed. I admired the work of C.L. Moore, Leigh Brackett, and Fritz Leiber and continued to respect the vitality and invention of Howard, but I had little time for the likes of Tolkien and Lewis, whom I regarded as bad popular children's writers whose moral attitudes were highly questionable and whose particular syntheses had none of William Morris' vision, Howard's manic originality, or Leiber's sophisticated flair. I was, I suppose, bored with the form itself. So when Carnell commissioned the first Elric story I decided I would try to do something as different as possible from everything which then existed."
—Michael Moorcock, introduction to "Tales of the White Wolf" 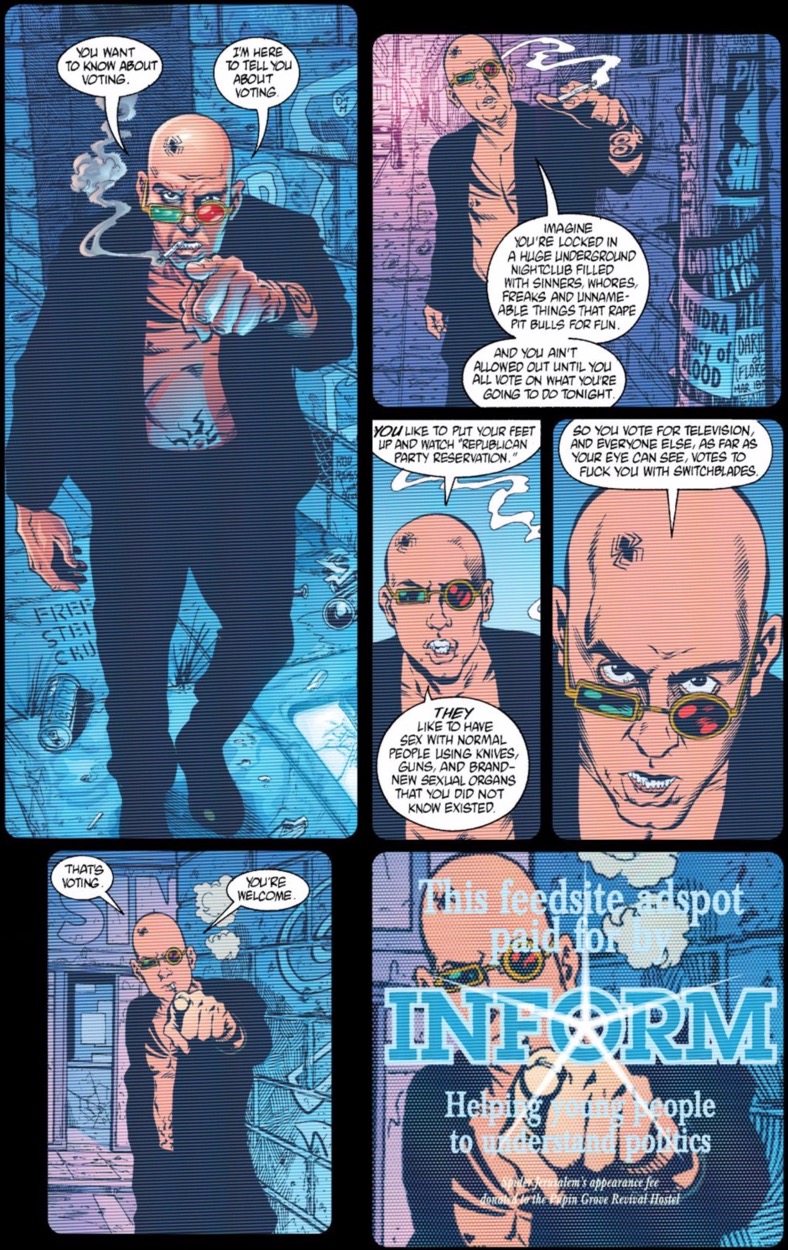 Nobody on the road
Nobody on the beach
I feel it in the air
The summer's out of reach
Empty lake, empty streets
The sun goes down alone
I'm driving by your house
Though I know you're not home

But I can see you
Your brown skin shining in the sun
You got your hair combed back and your
Sunglasses on baby
I can tell you my love for you will still be strong
After the boys of summer have gone
—Don Henley, "The Boys of Summer"

I watched the opening ceremony which will only be up for a few more days, because promotional material should be hidden behind a paywall according to Acti-Blizzard-Vison. 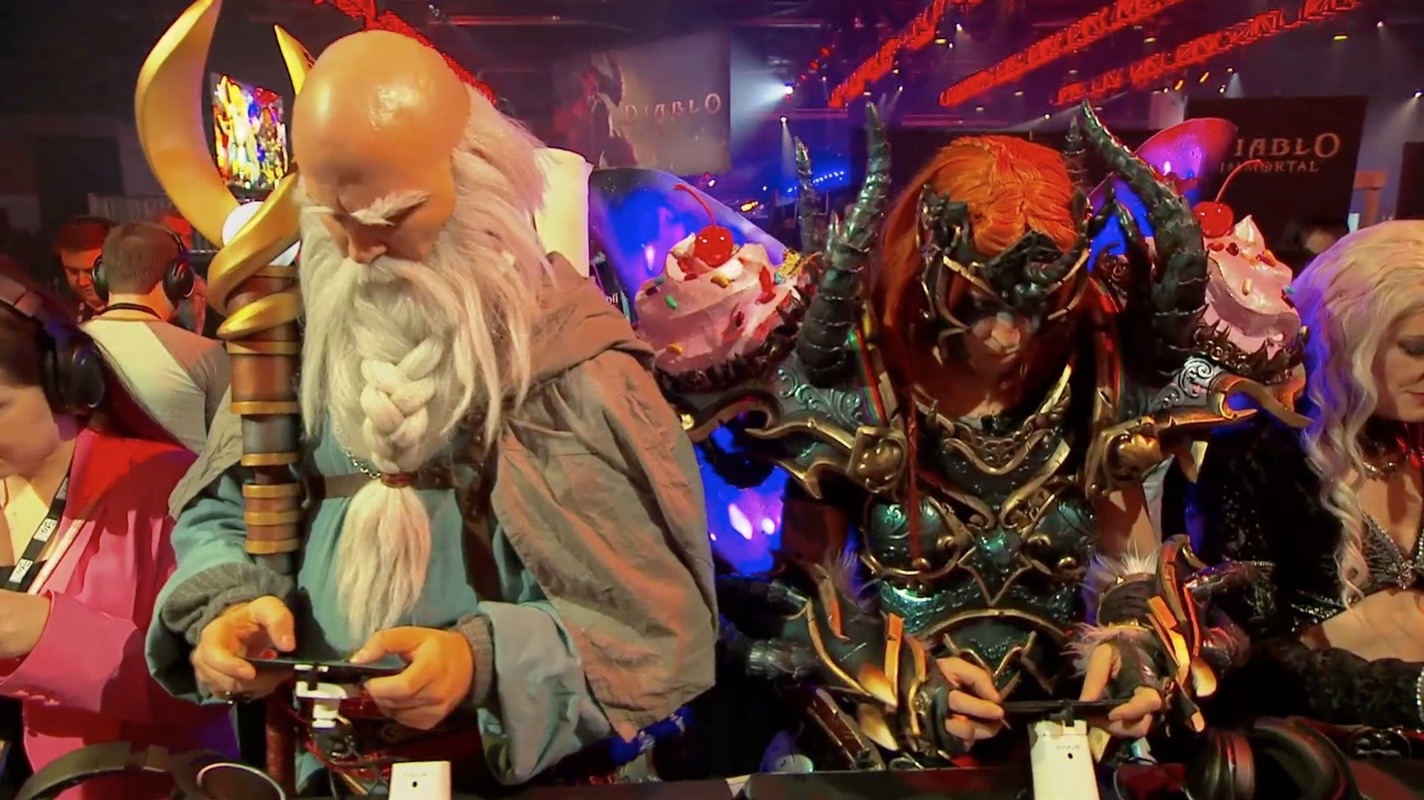 Watching Twitch (Sh*utF*ctory plays original MST3K! The new guy is lame.) has exposed me to "advertising". Some are just DVD sales, like In the Mouth of Madness, Bill & Ted's, etc. Nice. Some are weird "comedic" ad placeholders for Sh*utF*ctory. But some are paid propaganda, and it's comically ineffective on me.

There's an imitation-muppet anti-vaping ad that plays an airhorn every time the stoner/vaping muppet says anything, while a bunch of preachy muppets give him no support for his interests. Now I want to start vaping, and also hit the pot and liquor stores.

Back in the '80s, I might still have taken drugs (some of which are now legal, and anyway, statute of limitations) even if DARE had never shown up at school, but they made it almost mandatory: If those people were against drugs, they had to be good.

If I have any advice for young people, it's: Take drugs, drop out of school (I deeply regret staying in prison^W school), and disregard any authority telling you not to do things.